How much did Gina Rinehart make out of Fairfax?

Crikey writers Paddy Manning and Myriam Robin crunch the numbers. Just how much did the country's richest woman make off the ailing media giant? 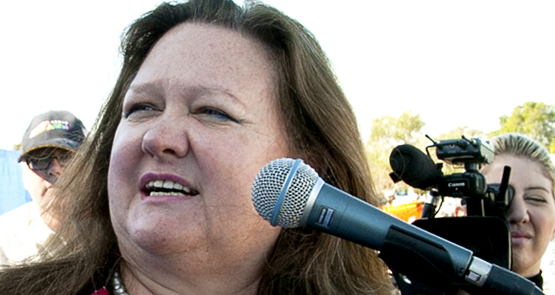 Gina Rinehart has finally sold out of Fairfax.

As the nation watched Canberra last Friday, the mining magnate put her remaining 15% of the company on the market, acquired almost three years ago to the day.

Rinehart took a parting blow at Fairfax, saying through Hancock Prospecting chief development officer John Klepec that she had “come to the conclusion that the senior leadership of Fairfax Media has no workable plan to revitalise the company and address the declining business and circulation numbers”. Fairfax responded that Rinehart had done well out of the investment, especially compared to her other media interests (a dig at Channel Ten, whose share price has plunged since Rinehart bought in).

But did Rinehart really do so well? Once you factor in dividends and Fairfax’s rising share price, she’s certainly ended up ahead.

On February 3, 2012, Hancock Prospecting lodged an initial substantial shareholder notice that disclosed it held a 12.6% stake in Fairfax Media, some 296 million shares. The notice only reported three purchases, however, totalling a little over 180 million shares acquired in three parcels for a total of $147.2 million or 82c each.  Fairfax shares had been falling, but assuming (probably generously) that the missing 116 million shares was bought for the same average price, Hancock’s initial 12.6% stake would have cost some $241.8 million all up.

Four months later Hancock filed a second notice, advising the exchange she had bought another 143 million shares for a total of $88.3 million, or 62c each, to lift her stake to 18.7%

Then, in an effort to resolve a standoff with the Fairfax chairman Roger Corbett, Rinehart sold down her stake back under 15% to comply with the company’s insurance policy, which was an apparent obstacle to taking up a board seat, selling almost 87 million shares for $50.2 million, or 58c apiece.

By July 2012, the end result was a stake of 352 million shares that seems to have cost Hancock about $280 million or 79c a share. Since that time, she would have collected at least $37.6 million in dividends. Now Rinehart has sold her entire 15% stake — some 352 million shares – for a reported 86.75c each, generating proceeds of $305.8 million. Adding in dividends, that suggests a profit of $63.4 million over three years, or a circa 7% pa return on an investment of $280 million. Not too bad, particularly when your wealth is plummeting and you’ve got an expensive iron ore mine to build.

Crikey tried to check the accuracy of these figures with Hancock Prospecting today, but did not hear back by deadline.

Rinehart finally gets her man on Fairfax board

Thanks for that Crikey. I’ve been wondering the bottom line for Gina since the news broke.

Maybe Rinehart will donate 100% of the $308m profit to the Australia Treasury as it will pay the interest bill for our National Debt for 10 days. Thanks to Swan

Cool. Gina can now employ more Africans on $2 per day. Trickle down altruism in action.

It was a dud investment..

It’s actually a gain of 5% a year (from August 2011 when her company popped up on the annual report as a significant shareholder) and if you include the loss of at least 4 cents from the sale of 87 million shares at 58 cents.

When you think the ASX200 gained 7% (11% including dividends) a year over that same 3.5 years, she should be sacking whoever gave her the advice to invest in Fairfax.