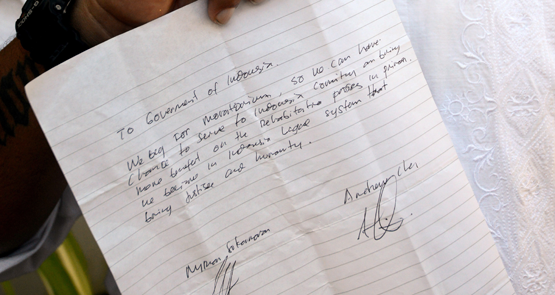 In recent weeks, the political machinations surrounding the resumption of executions in Indonesia have become truly diabolical. The January 18 executions of six people in Central Java, all of whom were convicted of drug offences, have been smartly followed by a flurry of confusing, startling and at times inconsistent announcements by senior political figures in the Indonesian government heralding the next wave of mass executions. And that is very grim news for Bali Nine drug smugglers Andrew Chan and Myuran Sukumaran.

Whatever your stance on capital punishment in general, or its suitability for drug offences in particular, the optics of the situation from an international legal perspective, or even just the standpoint of a rational human being, are bewildering. For those of you who have missed it, distracted by political maneouverings and intrigues closer to home, witness the following timeline of events:

On January 10, President Joko Widodo (whose popularity has plummeted sharply after just 100 days in office and who is struggling to contain the rift between Indonesia’s two main law enforcement institutions) is quoted as saying, during a lecture at Gadjah Mada University, that he will reject the clemency requests of all 64 death row inmates convicted of drug offences, a remark that appears to be inconsistent with Indonesian’s constitution — which implies each case will be considered on its merits — and contrary to international legal principles. In keeping with this statement, the clemency bid for Andrew Chan is rejected on January 22 (Sukumaran’s application for clemency had been denied two weeks earlier).

On January 27, nine days after the executions in Central Java, Indonesian Attorney-General Muhammad Prasetyo appears before a parliamentary committee to report that his department is “still finding the right time for the next executions of citizens of France, Ghana, Cordova, Brazil, the Philippines, Australia and one Indonesian”.

On the evening of January 29, in response to the declared intention of Chan and Sukumaran’s legal team to lodge an application for a judicial review (consistent with a 2014 constitutional court ruling that opens the door to multiple appeals), Prasetyo pre-emptively announces that based on “a meeting” between his department, the supreme court and the constitutional court, the pair are not eligible for a second judicial review.

On Friday, January 30, a request for a second judicial review is accepted by the Denpasar District Court, but three days later on Monday February 2, as the application is being deliberated by the court, Prasetyo makes a series of confounding statements including: that plans are proceeding for the next round of executions which will include the Australians; that the appeal (known as a “PK”) is still being considered by the court but that it will not stop the executions from going ahead in any case; that the PK doesn’t satisfy the necessary requirements; and that he will not interfere with the court process. These perplexing and entirely inconsistent remarks are so troubling that the lawyer for the pair, Julian McMahon, feels compelled to publicly highlight the contradictions.

On February 4, perhaps unsurprisingly given the meeting referred to above and Prasetyo’s prognostications of two days earlier, the district court rejects the application noting the documents will not be sent to the supreme court for assessment as only one judicial review is permitted, an outcome Indonesian lawyer Todung Lubis refers to as a “violation of the constitutional court decision“.

On the same day, Minister for Law and Human Rights Yasonna Laoly says the government will issue a regulation in “two to three months” to allow multiple judicial reviews but notes that, until that time, only one review will be allowed.

On February 6, Prasetyo announces that plans to execute the Australians may be temporarily “on hold” to facilitate the inclusion of Nigerian Silvester Obiekwe in the planned mass execution, whose clemency bid has not yet been rejected. Less than 24 hours later the Indonesian foreign affairs ministry announces Chan and Sukumaran will be executed this month.

On February 7 a former lawyer for the pair comes forward with allegations of political interference in the 2006 sentencing that delivered the death penalty.

If we leave to one side fundamental arguments about morality and the death penalty, when viewed from this vantage point there appears to be something fundamentally baffling and disturbing about the way Indonesia administers its own legal framework. Of additional relevance is a 2014 review by Daniel Pascoe at the City University of Hong Kong, which highlights recent supreme court decisions (2009, 2011) commuting death sentences on the grounds that the death penalty is inconsistent with Article 28I(1) of the constitution. Some members of the Indonesian judiciary are finding the situation so unsupportable that they have spoken out publicly.

The recent “bundling” approach to application of capital punishment sentences seems as strange as it does distressing, as though some grim economies of scale exist in either the political administration or the practical logistics of execution. And perhaps they do. Prasetyo conceded, after the diplomatic fallout from the January 18 executions, that international tensions were a problem and he hoped there wouldn’t be many more batches this year. The almost perfunctory approach towards the next round of slayings is perhaps unsurprising when you consider the political capital that Jokowi seems likely to garner from an issue that is domestically popular (albeit based on dubious statistics and misinformation); his decision underpinned, no doubt, by a sort of bleak bureaucratic arithmetic that guarantees that the payoffs domestically are likely to be exponentially greater than any international damage, which is likely to be short-lived in any case (or non-existent in the case of Australia, whose Prime Minister has pledged not to jeopardise diplomatic relations over the plight of the Bali Nine duo).

Tim Lindsey, director of the Centre for Indonesian Law, Islam and Society at the University of Melbourne has pointed to an emerging target of 10 executions per year. Late last year the Indonesian deputy Attorney General said this target was necessary to “reduce the backlog” of death row prisoners, although the fact that some of these, by the Indonesian government’s own admission, still have legal avenues of appeal left would appear to hamper their disposal.

Both Indonesian law and the International Covenant on Civil and Political Rights, which Indonesia became a party to in 1996, allows for clemency to be granted where the person who was sentenced to death is not the same person who faces execution many years later. Anyone sentenced to death has the right to seek pardon, and pardon or commutation of sentence may be granted in all cases (yes, even drug offences). Clemency is recognised not just as an important check on the power of the legislature and the judiciary, but also as an incentive for rehabilitation, which assists the state in controlling the prison population. The hope of clemency gives the inmates a purpose to live and spend their time productively as, indeed, it appears to have done for Andrew Chan and Myuran Sukumaran who are considered, by everyone who meets them, to be changed men. (One can only imagine the impact of executing these two men on the rehabilitation prospects of other death row prisoners).

There’s no doubt that the death penalty is a vexed question given vastly different attitudes to capital punishment around the globe, and it’s not likely to be resolved any time soon. A more urgent question however, and one with potentially fatal consequence for Chan and Sukumaran, is how we should respond when nations are poised to administer a final and irreversible punishment in a manner which is inconsistent with even their own laws.

A former Kerobokan prisoner pleads: spare the lives of the Bali Nine

Not to mention the fact that these men have already spent 10 years in jail. This is legally doubling up their punishment. These young men have also turned their lives around. In fact the head of the jail has been a character witness because of the good work they have done for other prisoners in the jail. What’s the point of this murder by the Indonesian state, then?
Politics apparently.