And the winner is … Turnbull

The leadership spill result this morning leaves Malcolm Turnbull perfectly placed to become Prime Minister with the strong support of the Liberal partyroom. 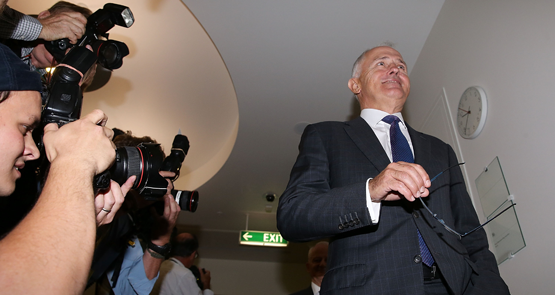 With Tony Abbott surviving the first attempt to remove him from the prime ministership, the medium-term implications from the last two increasingly frenetic weeks of leadership chaos are clear.

First, the obvious one, almost universally agreed outside the Abbott camp and even by some within it — Abbott’s prime ministership is finished; it’s merely a matter of time. Thirty-nine members of his own party room don’t want him as leader, and that’s despite having the entire frontbench back him on the spill motion, so plainly the bulk of the backbench now wants a change. One of the backbenchers behind the spill, Don Randall, flagged even before this morning’s proceedings that “this is just the beginning of a process where we have to sort it out once and for all”.

Second, Malcolm Turnbull is now the clear alternative to Abbott. Julie Bishop, while not surrendering her ambitions for the top job, has receded from calculations while Turnbull has strengthened his claims to the leadership.

Third, based on one and two, Malcolm Turnbull has been extraordinarily clever and patient. Assured that the prime ministership will be his, Turnbull has concentrated on ensuring that it comes to him with the maximum support of his colleagues. He has demonstrably, even ostentatiously, supported the Prime Minister and avoided any suggestion he is undermining him, including indicating he wouldn’t be supporting a spill. He appeared to go out of his way yesterday to praise the Prime Minister’s sagacity in not bringing the vote forward to this morning and laud the importance of allowing the party room to consider issues. And when Abbott then promptly did bring it forward, Turnbull exploited it brilliantly, declaring it a “captain’s pick”, exactly the phrase that is now synonymous with Abbott’s highhandedness and lack of consultation with the backbench.

Hark back to Turnbull’s first, disastrous stint as leader. The constant criticism, including from very senior colleagues, was about Turnbull’s arrogance — not merely did he not treat the views of his backbench with respect, he aggressively criticised them if they dared raise critical views. Turnbull’s arrogance was justified — he’s pretty much always the smartest man in the room — but it’s a terrible trait in a politician. And that moment in late 2009 when he declared, after a lengthy party room meeting featuring vociferous opposition to an emissions trading scheme, that the Coalition would be backing an ETS anyway, seemed to confirm the view that Turnbull saw his backbench as a clutch of delusional fools. Contrast that with Turnbull’s words yesterday about the importance of the party room — invoking John Howard, no less. I’ve changed, Turnbull has signalled, loudly, to the backbench — I’ll be listening closely to you.

By not moving today, Turnbull knows that he’ll still be PM, but that sentiment for a switch to him will be even stronger within the party room. There’ll be no victory by one vote, like Abbott, for Turnbull — his return will be brought on by a party even more eager for change than, patently, it is now.

But while the result is a good one for Turnbull (and Labor, which must be cock-a-hoop), it’s a poor one for Australia. This period of leadership uncertainty, which might continue for a couple more months yet before it is resolved, will only deepen the the lack of business and consumer confidence, further depressing an already struggling economy. Putting aside the politics, Australia needs new economic leadership. At this point, only Malcolm Turnbull can provide that, and the sooner the better.

Indeed. But Labor’s least preferred outcome would be for Turnbull to lead the Coalition to the next election, and particularly not with the strong support of his party.

This party is so dysfunctional that they’ll lose the next election before they appoint Malcolm Turnbull to lead them (or they’ll appoint Malcolm too late and lose anyway). The right wing has utterly captured the narrative in the party room, and – like the Republican Party in the US – will not let go of right-wing policies, regardless of who leads them. They live in a bubble.

God help us if this leads to a Shorten Prime Ministership. I’m no fan of Malcolm’s ego, but Shorten’s is worse.

Turnbull has just been defeated. Sure, there may be another spill, but that needs to be engineered again. Will he wait for the budget.

Meanwhile, Tony will probably hope for, or even engineer, some sort of emergency or “terrorist” event to boost his support.

Rachel612 I am in complete agreement, however Guy Rundle has written in Crikey that The Right are in decline. I just hope he is on the money.