Abbott — out of touch, out of luck, out of time

Tony Abbott is continuing to make missteps and display poor judgment in spite of holding off an attempt to unseat him.

The last two weeks have been a series of regular missteps by Tony Abbott, and they’ve accelerated in the last 24 hours. His judgement, poor until recently, has deserted him altogether. He is now a figure almost of pity. This morning’s poorly thought-out post-meeting media statement, delivered to a single Nine Network camera in his office — Downfall parody, anyone? — was so badly edited that he looked around at the end, seemingly looking for help from offscreen, as if his chief of staff had strayed from sight for a moment.

The statement in itself ran for no more than 160 words of banalities — Labor’s mess, disunity, only voters can sack me, etc, concluding with “I love this country, and I will do my best to help this country succeed,” before that nervous look around. 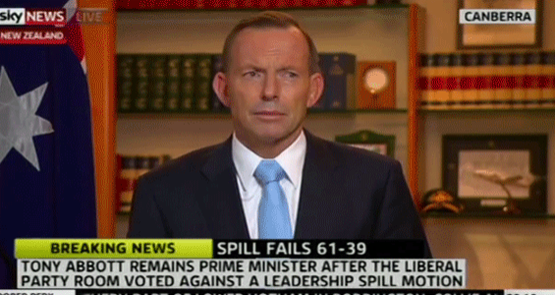 Had nothing been prepared for this eventuality? There were only a small number of possible outcomes from the spill motion, but this was the best Abbott’s office could do? No attempt to reassure Australians? No concessions to the backbench that had just taken a chunk out of him? Spill instigator Luke Simpkins caused a brief stir by saying Abbott had told the party room after the vote that the GP co-payment was off the table, but then he backtracked. So what was the solid form of Abbott’s acknowledgment of the deep trouble he is in?

Joe Hockey could have helped. Hockey will lose his job in a matter of weeks when Abbott loses his. A selfless act both for party and country would have been for the Treasurer to resign, in order to allow Abbott to reboot both the government’s economic agenda and his government. Hockey is out one way or the other, it’s only a matter of time. A resignation would help both his Prime Minister and the economy.

But two decisions yesterday further demonstrated there is something deeply wrong with Abbott and his team. Having made such a virtue of committing to becoming “the most collegial and consultative government” in Australian history, Abbott yesterday morning brought the spill motion meeting forward 24 hours, infuriating some backbenchers who had wanted more time. He made the announcement not long after Malcolm Turnbull had gone out of his way to praise Abbott for leaving it on Tuesday, allowing Turnbull, with a deft flourish, to skewer Abbott later with the “captain’s pick” line.

And late yesterday came something far worse. The Australian Submarine Corporation — that’s the government-owned shipbuilder that can’t be trusted to build a canoe, according to the sacked Defence Minister David Johnston — would be permitted to tender for the new Royal Australian Navy submarine contract, contrary to the government’s previous statements that it would not, because the government wanted to make a rapid purchase offshore. That backflip was to secure a single vote, of South Australian Senator Sean Edwards. According to Joe Hockey last year, the government simply didn’t have time to conduct a proper tender process for the subs (yes, there was not enough time to conduct a proper process for an 11-figure procurement…).

Now, major procurement decisions with serious implications for the nation’s defence are being made on the fly, to shore up single votes in a leadership spill. It’s a bad look, and worse process.

Go back a week, though, and the misjudgements continue. Most particularly, last Monday’s speech at the Press Club was acknowledged, even by his internal critics, as a chance for Abbott to reset, and to demonstrate to his colleagues that he knew where he wanted to take the government and the nation in 2015. It might not have saved his prime ministership, but it could have forestalled a move against him internally in the short term. A strong performance would have taken the wind from the sails of backbenchers eager to replace him. What he ended up delivering was a half-baked mix of old campaign speeches, xenophobic posturing and an assertion that his colleagues couldn’t legitimately fire him, that that prerogative lay, contrary to the constitution, with the voters.

At best, it did nothing to help his cause and probably wounded it further. And it again demonstrated that just doing the basics of staying in office appears beyond Abbott and his staff.

Adversity sometimes brings out the best in leaders. Julia Gillard was at her best, and most authentic, when she was under attack. Her first instinct was to fight hard, and gamble everything, demanding her enemies bring on the battle — whether it was Kevin Rudd supporters or the journalists who engaged in a long-running smear campaign against her. Watching her standing in the Blue Room and fielding dozens of questions about the AWU affair, inviting journalists to keep firing until they ran out of bullets, or seeing her stride into Parliament, declare a spill and urging those both in front of her and behind her to “take your best shot”, was to see the strong woman with an acute sense of timing and a rhino-thick hide that we saw too little off throughout her prime ministership.

Kevin Rudd, in contrast, panicked in the face of speculation about his leadership and, in that panic, ended up giving those who would remove him the opportunity to do so. Rudd also ducked the chance to challenge Gillard early in 2013 after Simon Crean tried to put an end to the incessant speculation.

Abbott appears to be more like Rudd than Gillard. His judgement has deserted him, he is making panicky moves and he appears rattled and defensive. He could do worse than phone Gillard and ask her for some tips on how to handle leadership pressure. She might have some good advice, if she could ever stop laughing.

And the winner is … Turnbull

Who the heck are Luke Simpkins and Don Randall, anyway?

Abbott displays all of the psychological defects of Rudd and none of the policy nous or courage of Gillard.

He wishes he had Gillard’s strength! 🙂

The poor old Cap’n; when in doubt fall back on patriotism and promising out tax cuts to the great unwashed (and small business) at a future date.
He’s obviously dusted off the old Howard instruction book he found under the desk (and overlooked during the Rudd/Gillard years).
Firstly patriotism is the last refuge of the scoundrel; was then is now.
Secondly; it’s not tax cut’s that are needed, it’s a tax system where everyone carries their weight, not some paying 33% and some paying 3%. Of course the LNP doesn’t touch the 3% as they are their major donors, so screw the rest.
Of course they kept the Cap’n; the LNP needs head kickers when they rip into working conditions such penalty rates, minimum wage et al.

Well said Bernard. It also appears the Submarine Corporation deal was another captain’s pick, as it was news to many on the front beanch. A week ago he was going to be all consultation and have no policy again on the run.

Can Abbott not give us at least one day of respite from his bungling?

The complete evidence of his inability to articulate a rational policy position is proven beyond doubt with his resort to ” I love my country” type statements.

Duh….That’s a given. Is he saying nobody else in his party, the Govt , the Parliament, the nation loves Australia!!!

Apart from being inane the statement is stupid because it begs the most obvious of questions ” If you love Australia why don’t you resign and let a competent person becomes PM or is your party so lacking in talent that this is as good as it gets?”