Where are all these jobs Abbott is supposedly creating?

Tony Abbott is right to say the government is creating 4000 jobs a week. But are they real jobs, and are they in the areas Australia needs? 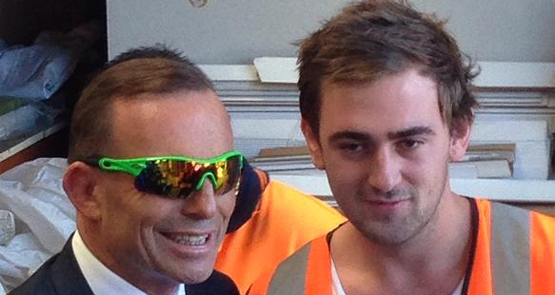 At Monday’s do-or-die Press Club speech Prime Minister Tony Abbott claimed jobs growth in 2014 was triple the rate in 2013, with 4000 new jobs a week.  Treasurer Joe Hockey said the same thing on AM on Wednesday, refashioning the figure as 600 new jobs a day.

It’s a claim that seems counterintuitive amid headlines about the PM abandoning as unachievable his pre-election pledge to create a million jobs within five years. Unemployment jumped above 6% last year, the resources bust is on us, and consumer and business confidence has stalled.

A walk-through the figures from the Treasurer’s office confirms the calculations are ridgy-didge, as far as they go, being based on simple averages of the total persons employed column of the most recent Australian Bureau of Statistics labour force data. The government is only making one debatable assumption: that the labour market performance through 2013 can be properly attributed to the previous government, even though the Coalition was in power for the last three months of the year, while the 2014 stats are credited to the current government. The Treasurer’s office says assuming a three month lag before its policies take effect is perfectly plausible, and let’s not quibble there.

The ABS data doesn’t break out employment by industry sectors but construction is reckoned to be the stand-out performer in jobs growth last year. Given how toppy property markets are looking, particularly in Sydney and Melbourne, it would be a brave policymaker who counted on a housing-led recovery in employment continuing on and on — even with lower interest rates.

But if the ABS data is right and jobs growth has tripled, why are we so gloomy about our job prospects and security? One problem with it is the official data fails to take account of population growth, as was highlighted in this terrific article by former Age economics editor Tim Colebatch. Over the three years to December 2014, the economy created 385,000 new jobs for every million new adults, his analysis shows, well down on the 690,000 new jobs created for every million new people over the past 30 years. Colebatch points at the high immigration rate — particularly employers using 457 visas to employ cheap cooks, for example — and argues the labour market simply can’t generate enough work for everybody.

People are simply dropping out of the workforce. The problem is highlighted in the following chart, which shows that, excepting Tasmania, the ratio of employment to population has tanked since the financial crisis. 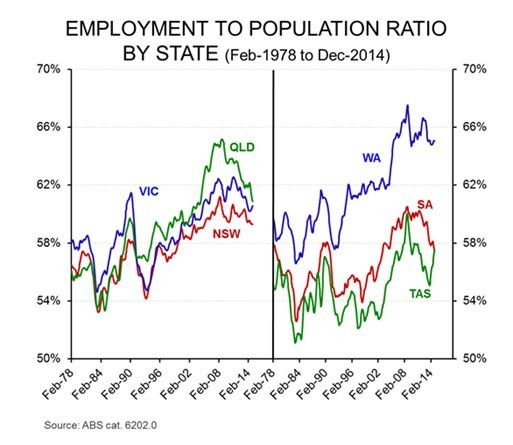 South Australian Senator Nick Xenophon, whose office provided the chart, told Crikey he has railed for years about the official employment figures and queries the government’s jobs claim: “I think that needs to be deconstructed, it needs to be forensically looked at. What percentage of those new jobs is someone working three, six, eight hours a week, particularly given anyone is counted as employed if they work as little as an hour a week?”

Data quality aside, the most pressing question is, given the tough job of transitioning out of the resources boom, where is future jobs growth going to come from? The Treasurer’s office points to “green shoots” such as last month’s ANZ job ad survey, which showed jobs ads had risen for the seventh month in a row, and this week’s Dunn & Bradstreet business expectations survey for the next quarter, which shows a jump in the hiring intentions of business for the next quarter.

Unfortunately for the government neither survey, on a close reading, is optimistic. ANZ’s job ads survey was a reliable leading indicator when print dominated, and although it now includes online ads it does not include social fora like LinkedIn, so it is still finding its feet in the digital economy. ANZ chief economist Warren Hogan commented: “The good news is that the economy continues to produce new employment opportunities. The bad news is that this has not been quite enough to counteract the flow of new workers into the economy plus the on-going loss of jobs in certain sectors”.

Hogan told Crikey ANZ had revised its forecasts for 2015 down, like most economists and expected unemployment to peak later this year: “We’re expecting jobs growth in certain key services such as real estate, IT and telecommunications and construction.

“The $64,000 question is whether or not broader business services industries can increase their headcount again — banking, accounting and the legal profession have been subdued at best for the last half-decade and they are big employers”.

Headlined “outlook cools”, Dunn & Bradstreet’s survey is also less than confidence inspiring: firstly, although the survey has shown a jump in hiring intentions since the last election, and a big jump in January’s one-month survey, actual hiring has consistently tracked below expectations. Whether the jump in intentions translates into new jobs is unclear.

D&B adviser Stephen Koukoulas told Crikey there was no suggestion we were headed for the precipice: “The labor-intensive parts of economy are retail and construction. Both are doing pretty well. House building and construction is pretty strong, really encouraging, and unlike mining, which is not very labor-intensive. The other one is retail, as we move from the mining boom to the dining boom, if we’re spending more money in cafes and restaurants , that employs a lot of people. So there’s a compositional shift in growth towards those sectors.”

Koukoulas is also not too gloomy about the future of manufacturing: “If you’re a manufacturer and you’ve survived last few years, with the Australian dollar now below US80c and probably staying there, you’re going to start doing well.”

A microphone-led recovery seems unlikely, but niche manufacturing stories are always like that. Most concerning for the likes of Xenophon (and Victorian independent Senator John Madigan, who let rip on submarines on Q&A on Monday) is looming self-inflicted job catastrophes in industries like car manufacturing and shipbuilding, particularly if our next submarine is going to be built offshore.

Says Xenophon: “We are looking at a tsunami of unemployment with the auto sector in next few years. [The subs decision] will have a massive multiplier effect in terms of unemployment.”

Xenophon points to growth industries like food manufacturing, medical technology and backs calls for relief on penalty rates for small businesses in the hospitality sector. “I think we should be looking in advanced manufacturing, taking head-on the dumping that occurs that kills jobs — we take a very narrow approach to the WTO rules. We need to have a strategic approach to infrastructure, and smart manufacturing. We need to make sure our subs are built here and I think we need to have incubators for SMEs to drive jobs growth — miniature silicon valleys in our capital cities.”

It’s not exactly a comprehensive jobs plan, but it’s better than cutting industry assistance, abolishing the carbon tax and praying — which seems to be the nub of the government’s strategy to date.

Who’s really to thank for our jobs boom?

This “jobs” mantra bothers me. As automation and computer technology reduces the number of jobs in the agriculture, in manufacturing and now in the service industries, we see a rise in “bullshit” jobs; those that do little to improve the wellbeing of the community. Worse, they may even be parasitic the economy. Unfortunately, currency traders, financial advisors, spruikers of property or alternative medicine, and so on, often earn much more than a farm worker, a bricklayer or an aged care worker. If we are to share the wealth of the community only through jobs, we need to reduce the hours worked by those doing something worthwhile, and try to eliminate those jobs that do not.

Oddly enough the multinationals in the global market place do not seem to care if the next generation of Australians becomes unskilled adults with only casual employment.

The market, left to itself, extracts profits, pays little in taxation, and leaves provision of training to the government.

If we are to share the wealth of the community only through jobs, we need to reduce the hours worked by those doing something worthwhile, and try to eliminate those jobs that do not.

As you allude to, thanks to robotics and AI, we are within a generation – two at the most – of most of the human race becoming irrelevant from a labour perspective. There will be nothing they can do that a robot cannot do better and cheaper.

Were we not governed by greedy, selfish psychopaths, this would be a cause for much celebration.

All very well to present a dystopian future for Australia, with some ‘steady state’ economics, but the analysis of labour market and population are flawed and result in comparing apples with oranges.

Since 2006 population data has included temporaries under the NOM based on arrivals/departures 12/16+ months, not related to immigration, residency or citizenship status.

Why do Australian journalists, demographers, environmentalists, politicians etc. keep pushing this ‘immigrants are taking our jobs’ meme, using data that is not understood, or worse, is purposely distorted for maximum negative impact, while creating negative memes about ‘foreigners’?

Fact is the western world (soon to be followed by the rest) is already grappling with ageing and declining populations with stagnant fertility rates, and needing to attract young people, but Australia deems attracting young ‘immigrants’ (whatever their legal status) as a negative for the nation? Surely this is not ‘dog whistling’?

When is Australian social, political and media culture going to accept that immigrants whether temporary or permanent have been and will continue to be good for the nation’s future (with many restrictions)? As former Clinton admin person Robert Reich stated, we have had a ‘baby boomer bomb’ that is ageing, the solution is to continue on with planned immigration, a phenomenon that the anglo world excels at, so why the negativity and talking down, like ‘white nativist’ lobby does in the USA? Surely not related….?