Satellite NBN limited in more ways than one ... Pyne's schoolyard insults ... no kittens for us

NBN Co — fair use, not too much use. The Australian reported this week that the NBN Co was facing delays in launching its dedicated satellites, leading to concerns about meeting its own deadlines for the services to be up and running. We hear that’s not the only worry, with one rural Crikey tipster telling us that NBN Co is now limiting the types of satellite plans available:

“Being a person that lives in a rural area I don’t have the ‘luxury’ of proper internet. I have to make do with the sluggish monster that is Satellite. We have to put up with high latency, slow speeds and low download limits. Today I got an email from my ISP that NBN Co is now monitoring clients and any that exceed 50GB in any four week period will have their service shaped to 128k for the following full two weeks! I currently have a 70GB plan. Apparently this is all part of NBN cos new wholesale agreement … following is part of the email I received:

‘NBN Co has now issued a new wholesale agreement where they will no longer allow service providers to manage plans outside of what they consider excessive and have taken steps to enforce it. The first step was to inform all providers that the plans on offer were far too high in terms of usage, you may have noticed our website now has new plans, these plans have been available for a few months now. Other providers have designed new plans or pulled older plans offline as well.

The next step is a more drastic one, where if NBN Co identify a customer to have exceeded a download of 50 Gigabytes of data in any four week period, then that customer will be slowed to a 128kbps speed by NBN Co, without BorderNET’s consent, for a period of two weeks from the date the data first exceeded 50 Gigabytes. As you are a customer who has a service that has the potential to exceed the 50 Gigabyte limit, it is our responsibility to inform you of these changes and the potential outcome should you continue to use the service past 50 Gigabytes in a four week period.'”

We asked the NBN Co why the decision was made that more than 50GB a month was an “excessive use” of bandwidth and were told it’s part of a fair use policy while the interim satellite service is in place, and it’s about a “fair go for everybody”:

“The issue comes down to the fact that the interim satellite service was set up — and was always intended to operate as — an interim measure until such time as NBN’s two purpose-built satellites were launched and became operational. The long-term satellite service will deliver broadband to up to 400,000 homes, farms and businesses in the bush (as well as Australia’s overseas territories). The first of these two satellites is scheduled to launch towards the end of this year, with commercial services becoming available in the first half of next year. The interim satellite service, however, is designed to serve a maximum of 48,000 users only. That’s based on the fact that we’re only able to lease a finite amount of bandwidth from commercial operators. Hence the problem we faced: some very heavy users of satellite broadband were crowding out the majority. So we began for the first time enforcing the fair use measures that had always been in place (but up until then had never been used). We also acquired additional bandwidth to give people a better service.”

NBN Co says the policy was announced last year, and retail service providers were asked to start enforcing it in December, with NBN Co starting the enforcement this month. So now not only do people in rural Australia have to deal with slower speeds than the rest of us, they aren’t allowed to use too much of bandwidth, either.

This moment and forever? One MP who says the Prime Minister can count on his support “even if he were to knight Camilla”, is the member for Hughes, Craig Kelly, who even wrote a lengthy Facebook post about all the reasons he’s “sticking with Tony”. Kelly has been effusive in his support, even to a tipster who emailed the MP with his concerns about the PM. Our tipster was surprised to see the use of italics in the email, which seemed to suggest Kelly wouldn’t be Abbott’s forever: 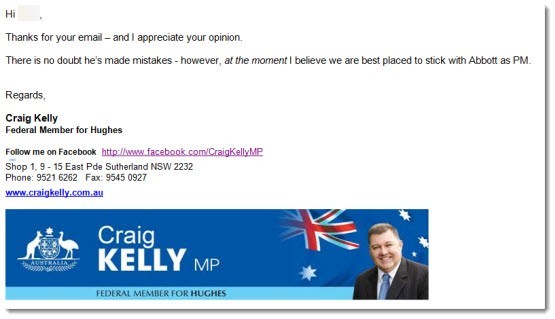 We took it to Kelly’s media team and asked if his support was conditional and were told:

“Having discussed this with Mr Kelly, it is clear the italics were used to emphasise that this is a critical moment in time, and it is important that the team unite behind the Prime Minister given the strong leadership needed to clean up Labor’s mess.”

So that’s one number definitely in Abbott’s camp.

Wasn’t me, miss. Education Minister Christopher Pyne and Labor’s Anthony Albanese locked horns on the Today show again this morning, and it seems that Pyne might have been spending too much time in schoolyards recently, saying “see you next Tuesday” to Albanese as the conversation was wrapped up by host Karl Stefanovic. Did Pyne think he would be running into Albo on the way to the Coalition party room meeting on Tuesday? Or was he using a schoolboy acronym to disguise an insult that sounds similar to “grub”? The smug look on his face makes us think he knew exactly what he was saying. 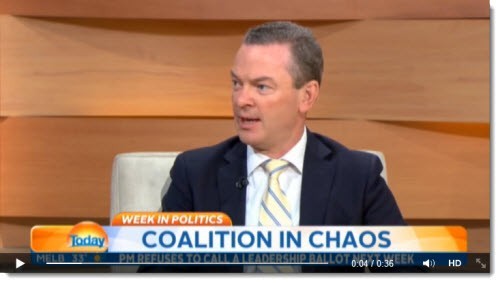 Leadership terms. While it seems that the days of Tony Abbott’s prime ministership are numbered, it also seem that the terms of our leaders across the nation are getting shorter. Lucky for us blogger and broadcaster Casey Briggs has crunched the numbers across federal, state and territory governments and found that in the last 10 years, leaders have served on average 954 days, while the overall average since federation is 1594 days (excluding the leaders currently in office). Will that average be changed next Tuesday? We’ll have to wait and see. 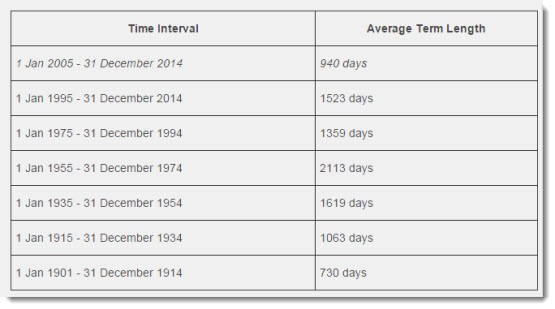 Murdoch losing friends. Following news this week that Saudi Prince Al-Waleed bin Talal had sold his shares in News Corp, we hear this from a tipster who seems to know why Rupert Murdoch might be on the outs with one of his greatest supporters:

“A leading Murdoch mouthpiece told me that Kingdom’s abstention at the last AGM was a warning that Murdoch’s unstinting support for Israel and hostility towards Islam was unacceptable.”

Are Murdoch’s Twitter activities annoying his friends? As always, Crikey will be keeping an eye on this one.

Pussy blocked. Ride-sharing app Uber succeeded at buying itself free media hours, clicks and pages yesterday by offering users of the app a 15-minute visit from a basket of kittens. As Crikey readers would know, we were expecting our own basket of kittens yesterday afternoon, but were told that they could not come because they were all tuckered out, just two hours into the promotion. As the afternoon wore on it became obvious that only major media outlets — or online retailers like Showpo, with huge social media reach — actually got a visit from the kittens, which is convenient for a company that is trying to counteract image problems following allegations a driver assaulted a passenger. It seems like if you aren’t a major media outlet actually getting a visit from the kittens was about as likely as catching the red dot. Here at Crikey we’re hoping that our disappointment will be allayed next week when we celebrate our 15th birthday on February 16 — a bit of cake would do the trick. Oh, and Uber, watch out for your post — some disgruntled cat lover might send you glitter over the pussy cock-up.

On download limits, anyone getting 50 GB/month is doing well. We are just 2 hours from Sydney and the maximum download we are permitted (wireless connection is all that we have available) is 8 GB/month. The constant upgrades by phones and computers uses much of that. Some neighbours have satellite coverage but no more satellite coverage is available in this area.

The Liberal Party members being interviewed this afternoon, give their main reason for retaining Tony Abbott is the instability it would cause if there’s a change of leader. Surely the fact that we have such chaos in the Senate and the most disruptive Liberal leader in Australian history were created by a then stable government?

Venise – same as I heard.