Abbott danced to the drumbeat of ruinous polls for Julia Gillard. Now that he's polling worse, it's time to face the music. 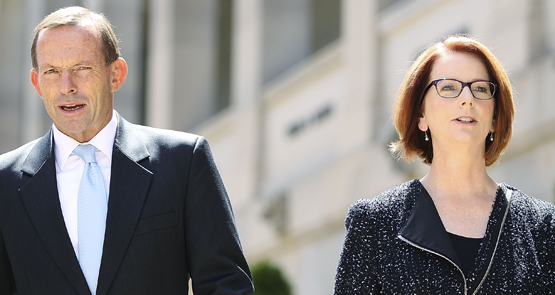 In the increasingly fluid situation that prevails ahead of the looming resumption of Parliament, it would seem to be anyone’s guess whether Tony Abbott can survive the next week with his prime ministership intact.

However, should he do so, one thing seems beyond doubt — nothing will save him from a steady and ongoing drumbeat of ruinous opinion polls. Such was the sword by which Abbott lived for most of the life of the Gillard government, and so in time he may die by it.

The first taste of what is surely to come was provided over the weekend by a Galaxy poll in the News Corporation tabloids, which recorded Labor’s two-party preferred lead at 57-43.

This was the government’s single worst result out of 156 opinion polls published since the election, with the exception of one outlier from the heavily Labor-leaning Roy Morgan series in the wake of last year’s budget.

A poll conducted by Ipsos for the Fairfax papers was a little kinder, coming in at 54-46 when preferences were allocated as per the result of the 2013 election. However, this new arrival on the polling scene appears to be exhibiting a lean to the Coalition relative to its rivals, and the result was comfortably the worst for the government out of the three federal polls it has published so far.

Furthermore, Ipsos also published a two-party result based on respondent-allocated preferences, and as usual this delivered the Coalition an even worse result, putting Labor’s lead at 56-44.

The only poll of the past week that didn’t move sharply against the Coalition came from Essential Research, a series noted for being slow to react to political upheavals. Furthermore, the rating it maintained was by no means anything for the Coalition to crow about, with Labor leading 54-46.

According to the latest reading of the BludgerTrack poll aggregate featured on my blog The Poll Bludger, the Prime Minister’s flash of inspiration on Australia Day has so far inflicted 2% of damage to the Coalition’s already dismal two-party preferred rating, which probably understates the situation given that trend calculations take a while to catch up in the event of sudden change.

Even so, the modelled seat projection based on the results has Labor on 93 seats to just 52 for the Coalition, with nine seats having moved to the Labor column in just one week.

Interestingly, nowhere does the situation for the Coalition look to be worse than in Queensland, at least in terms of the swing. The state is one of two along with Western Australia where the two-party shift is in double digits, based on a trend calculation of state breakdowns from all but one of the eight opinion polls published so far this year.

Whereas Queensland’s seats divided 22-6 in favour of the Coalition at the 2013 election (not counting Bob Katter’s seat of Kennedy and Clive Palmer’s seat of Fairfax), the BludgerTrack model currently has it going 19-9 the other way. This is based on probability estimates of the outcome of each individual seat, which currently rate Labor a better-than-even chance in every single seat in Brisbane, the least bad prospects for the LNP being Bowman on 31% and Ryan on 27%.

Intimations of disaster in Queensland provide Tony Abbott with just one more depressing point of commonality with the experience of Julia Gillard, whose record he is threatening to match in terms of opinion poll performance.

This is illustrated by the chart below, showing the trend of two-party polling for the Gillard and Abbott governments following the respective election victories of August 21, 2010 and September 7, 2013. 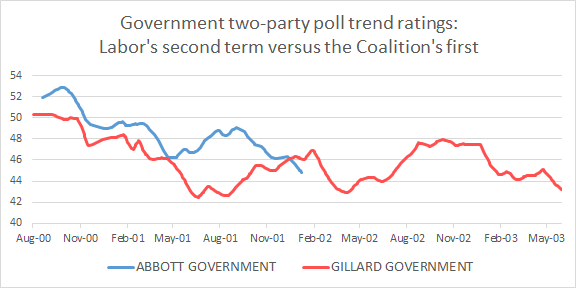 The present lurch away from the Coalition, which follows a briefly hopeful period in which attitudes to the government appeared to soften over the new year break, marks the first time Abbott’s government has rated worse than Gillard’s at the equivalent period of the previous term.

Ominously, it was also at around this point in Gillard’s term that Kevin Rudd launched his first failed leadership challenge in February 2012. The announcement of the challenge the previous week seemed at the time to have the perverse effect of causing Labor’s poll ratings to perk up slightly, for which the best explanation was that potential Labor voters were dipping their toes back in the water in anticipation of Gillard’s demise. When they weren’t given what they wanted, Labor’s poll ratings plunged back down to a level approaching the nadir of the carbon tax revolt of mid-2011.

If Abbott does survive beyond Tuesday, any hopes he might harbour for clear air and a fresh start are no less sure to be quickly dashed.

For the Coalition to recover its competitiveness, the Band-Aid that needs to be ripped off is not the present cycle of division, speculation and instability, but Tony Abbott himself.

Another day, another destiny

Any poll that uses the preference flows from the last election will be treading on thin ice.

I understand the complexity of the whole thing, and that preference flows won’t change as dramatically as they did in Qld, but the oft used formula of using last election preference flows is now going to be so dodgy as to be worthless.

In my humble opinion.

The Liberal Party is not the Labor Party so comparisons with Gillard are pretty vacuous. After all it was Labor that knocked off Rudd in June 2010 when Labor was 52 – 48 ahead in the polls.

I doubt there will be a leadership spill on Tuesday. I think the party room will vote not to have one. Tony will survive.

Then the interesting question will be just how much of the command and control management via Credlin’s office will change. If it does, we will see a weakened prime minister and a more assertive front bench taking on the responsibility of government and that arrangement has a chance of success.

I think Abbott will still be PM at the 2016 election and that the Coalition will lose.

Abbott’s 3 word slogan for Julia was ‘Ditch the witch’. It appears that Abbott’s own catch phrase should be ‘Bone the ‘Tone’.

I’m surprised that comparisons are made between Gillard and Abbott. I recall journalists such as Grattan and many others speculating on whether the minority government would last for 6 or 12 months but were certain it wouldn’t last full term. Abbott didn’t start at this point, he had just secured a significant win. Then there was Rudd white anting through a compliant media. No-one’s white anting Abbott, it’s just his lack of ability. The job’s simply beyond him.

The spill is being done to consolidate Abbott. Bishop was never going to challenge. It is to stop Turnbull. It is also to lift the profile of the next generation to stand in Turnbull’s way, and who will continue the great tradition of supporting the interests of the big mining shareholders. The key personalities will be Rhodes scholars.