NT is a failed state, and it’s time to intervene 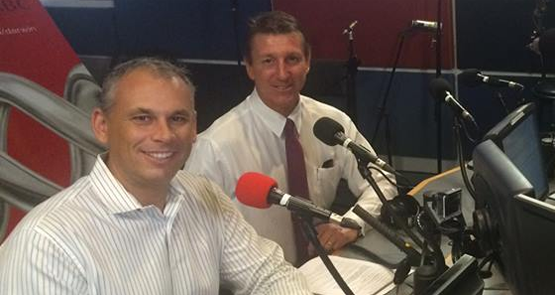 This week’s ructions in the Northern Territory’s ruling Country Liberal Party were at first described as “chaotic”, then “bizarre” and finally “farcical.”

It has been all that and more, no less so now that the leaders of the attempted coup have either been promoted in a post-coup we-are-all-friends-now-in-the-CLP reshuffle — or in the case of frontbencher Robyn Lambley, the only one who expressed her regard for the basic human values of honesty, integrity and respect — sacked and given a show-cause as to why she shouldn’t be expelled from the CLP. This train wreck has plenty of fuel and track left to run on yet.

In politics the only “way forward” after a farce this profound is a further descent into chaos — or some external intervention.

For I-never-went-away Chief Minister Adam Giles and his new bestie and Deputy Willem Westra van Holthe, it is all back-slapping and business as normal. The vacuous press releases have started rolling out again — a couple million for kids here, a glossy shot of a government-sponsored bread-and-circus event there. Suddenly it as if the events of a few days ago were but a bad dream caused by the massive electrical storm that hit Darwin last Monday night while the coup-plotters were at work.

Adam Giles’ latest “Weekly Message” newsletter is as glossy and vulgar an example of PR puffery as you’ll see. There on the front page are Giles and his new Deputy, all polished teeth and faked smiles. Giles’ “message” is as profoundly cynical as it is meaningless and disturbing.

Deputy Chief Minister Willem Westra van Holthe and I have joined together in a pledge to ensure Territorians are at the forefront of all government decision-making.

We need to get back to a focus on making people’s lives simpler, safer and easier concentrating on how government, and politicians, can focus more on the individual rather than treat our citizens like they are part of some economic agenda.

Territorians are part of a community not a five-year plan …

We were elected by the people and we will ensure the people are properly represented as we move forward. Our focus is now on the individual and delivering the best results for them.

It’s now time to regroup, refocus and remind Territorians why they put their trust in us back in 2012. (original emphasis)

Chief Minister of the Northern Territory

I don’t often agree with Nicolas Rothwell — for me, his writing is too often tendentious, turgid and florid, sometimes all at once. But since at least 2009 he has prosecuted a consistent and thoughtful case that the NT is a “failed state“, firstly under the Labor administration and more recently during the various iterations of CLP government since 2012.

On Wednesday this week The Australian published Rothwell’s latest on this theme, and I cannot help but agree that the NT is “a blundering colonial relic addicted to perks”. Rothwell’s excoriating and mercifully brief analysis argues that this latest crisis has its roots in the origins of self-government in the NT:

“The seeds of the crisis were sown with self-government in 1978 and the political architecture chosen: a single-chamber Legislative Assembly of 25 members rules over a vast land mass with barely 220,000 people, more than a third of them Aboriginal.”

Factions in politics can often provide stability and discipline. But in a polity with the minuscule political gene-pool of the NT — once described as being the equivalent of an Apex Club — politics can easily be corrupted by greed, incompetence and venality.

The CLP, born in 1974 of a shotgun marriage between a federally affiliated local branch of the Country Party and an unincorporated rump of urbane Liberals, has always been riven with factions. This much was evident in the existential threats posed by the massive in-fighting of 1983 and 1986 and during the ugly coup that ousted Terry Mills from the chief minister’s job in early 2013.

Rothwell attributes blame for the current crisis not only to historical accidents and blunders in the administration of the NT but also to structural and societal elements — the “virtual absence of a homegrown bourgeois or educated class”; the “virtual absence of civil society: almost everything is controlled and funded by the government” and, most tellingly, to a local media at once obsequious and submissive.

For mine that last is a tad harsh. The ABC, the NT News and the local Channel Nine franchise have done a very good job of reporting the news of the day as it has unfolded this week — that much was obvious to me even while I was out bush all week and away from the internet, TV, radio and the daily paper for much of that time. Where they fail too often is at critical in-depth analysis and medium to long-form opinion-writing.

But the core of Rothwell’s thesis, that the NT is a failed state — a “rotten borough” so corrupt and corrupted that it is beyond self-redemption — is sound.

In 1985 minister for finance in the first Hawke Labor government Peter Walsh — a zealous protector of the [Commonwealth] public purse if ever there were one — made a scathing attack on the territory in the federal Parliament.

The NT administration had, according to Walsh, produced “the most bloated and feather-bedded public service in the country.” At the time, not long after I arrived in the territory, there was a running joke doing the rounds of the pubs and clubs in Darwin that went something like this: “What did you do with your free $12,000 last year?”

The response of course was “What free $12,000?”, which was followed by uproar and an explanation of the joke.

Back then $12,000 was the figure that the good taxpayers of the Australian south-east contributed to keep each and every man, woman and child living off the fat of the land in the NT by way of generous subsidy. As is the way of all things, that joke has only grown in time.

As Rothwell notes, the good taxpayers of the Australian south-east fork out around $4 billion a year to keep the NT running. Divide that number by the 220,000 people in the NT — about the population of your local shire council but without the productivity and contribution to GDP — and the figure is around $18,000 per head.