It's a huge week in politics and Andrew Bolt is nowhere to be seen. Where is Ten hiding him?!? And other media tidbits of the day.

Missing: Andrew Bolt. Sky News is turning on Abbott, helped along by the likes of Janet Albrechtsen, Chris Kenny, Miranda Devine and others. But we’re missing someone. Where is the Bolter? When we have the biggest story in politics since the September 2013 election, he’s absent from the field. The Oz’s Media section can carp about the absence of Lateline from the ABC’s line up (its been shunted to News 24), but they don’t mention the absence of Andrew Bolt from either Ten or Sky News. Can’t Ten or News afford The Bolt Report anymore? According to Ten’s Sunday schedule, the Bolter is absent without leave, a frustrating offence for a political junkie like him when there’s a crisis on. The conservatives complain about a lack of conservative voices on broadcast TV (especially the ABC) — so what’s happening to the Bolter? — Glenn Dyer

Grauniadwatch. Ah, perhaps we do this too much, but the Big Blue is providing us plenty of copy in its ever-expanding Aussie adventure. Yesterday there was a piece from recent arrival in the office Fred McConnell, who has been here two months, and was pleasantly surprised to find that there was no hassle bringing a vial of testosterone into the country (coals to Newcastle, digger, coals to flamin’ Newcastle!). McConnell then wonders (largely for a UK audience):

“My next priority is finding that queer community where people can relate to where I’m coming from and yet it’s the opposite of a big deal. I knew those places in London. I hope they exist in Sydney.”

Readers, The Guardian‘s Sydney office is in Reservoir Street, Surry Hills — right next door to Darlinghurst. Could someone there put down the Pulitzer long enough to direct their colleague to go right and then left for three blocks to Oxford Street, as a good start? And stop writing about us like we’re Albania in 1957? We.can.hear.you. — Guy Rundle

Adelaide shutdown. The ABC has begun to formally issue redundancy notices to TV production staff in Adelaide. End-dates, announced via phone calls yesterday afternoon, range from mid-Febuary to late June, depending on production requirements. Meanwhile, a bill put forward by SA senator Nick Xenophon to force the ABC to produce content in all Australian states and territories, with an eye to halting the Adelaide production closure, is still before parliament. When there was a Senate inquiry into ABC regional production cuts in Tasmania and South Australia in 2011, the ABC didn’t advance with redundancies until the inquiry was concluded. ABC staff are wondering why this isn’t happening this time. — Myriam Robin

Unexpected outbursts. Politicians use Twitter for all sorts of purposes, usually blistering attacks, or in Rupert Murdoch’s case, brief concrete poetry — or “Po”, as it’s known.

Gerry Adams? He uses it to try and shift his image from the rather more serious one of being leader of the IR … — of Sinn Fein. Here’s the leader of a 45-year-old political/guerilla movement (and yes, it’s really him): 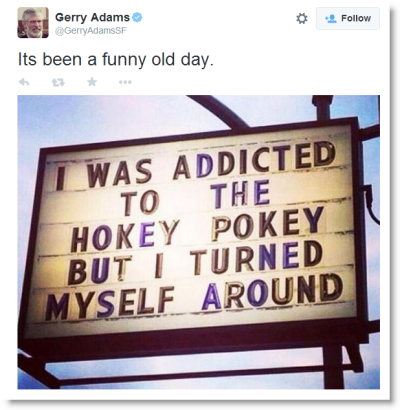 Cheaper Foxtel pays off for News. Foxtel, 50% owned by News Corp (with Telstra owning the other 50%), saw some benefits of the new lower price subscription offer in the three months to December 31, according to the News report for the same period released this morning.

News said the new lower-priced offer, which started on November 3, helped boost the number of subscribers to a record 2.7 million, after having been stuck on around 2.6 million for the best part of a year. “Total closing subscribers were approximately 2.7 million as of December 31, 2014, a 5% increase compared to the prior year period, as a result of higher subscriber sales, partially driven by the new pricing and packaging strategy that was implemented in November 2014, and lower churn. In the quarter, cable and satellite churn improved to 11.8% from 12.8% in the prior year,” News said in the quarterly report. The current quarter will be watched closely to see the impact of the start up of the Presto streaming service with the Seven Network. This raises an immediate question: will News start breaking out the different subscription stream figures, or lump them all into one figure?

But in terms of revenue and earnings, it was hard scrabble for the Pay TV monopoly and its Fox Sports associate. Foxtel revenues for the three months ending December 31fell US$59 million down to US$680 million in the prior year period due to “adverse foreign currency fluctuations”, the report states. Foxtel’s earnings before interest, tax, depreciation and amortisation (EBITDA) fell US$12 million to US$198 million because of those same fluctuations. In Australian dollar terms, Foxtel revenues were flat and EBITDA grew 2%. No figures were given.

At Fox Sports News revenues rose US$2 million, or 2%, compared to the prior year primarily “due to higher affiliate pricing and increased subscribers” (from Foxtel). Segment earnings before interest and tax in the quarter rose US$1 million, or 2%. Adjusted revenues increased 11% and Adjusted Segment EBITDA increased 9%, compared to the prior year. Again, no actual figures for the profits and revenue figures were given. The level of disclosure is disgracefully weak compared to what is released in Australia. – Glenn Dyer