News Corp columnists keep telling us that Murdoch is no control freak -- so why are they so reluctant to criticise their boss? 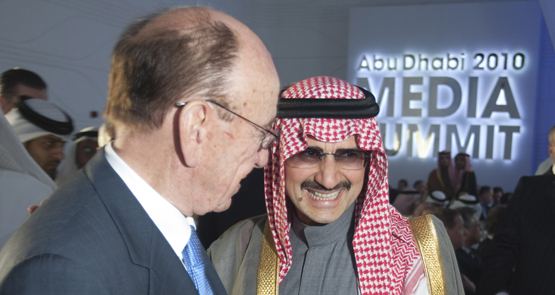 Say what you like about Rupert Murdoch, if there’s one certainty in life it’s that his journalists will always put a positive spin on things when writing about their boss.

The latest quarterly result released by News Corporation this morning will be no different, even though it shows the world’s biggest newspaper division continuing its inexorable decline with another 15% drop in earnings.

The Australian’s early website coverage ran under the headline “Books, property lift News Corp revenue” and opened with the following:

“Media giant News Corp has posted a better-than-expected second quarter result, with revenues pushed 2 per cent higher due to a strong performance from the book publishing and digital real estate businesses.”

This positive spin culture is something Rupert has demanded right throughout his record-breaking 63 year run at the top of News Ltd, News Corp and 21st Century Fox — and the likes of super-obedient columnists such as Terry McCrann have made an enriching career out of it.

From time to time you get columnists who attempt to claim Rupert is no control freak and they say and do whatever they like, even when it contradicts the views of their master.

Check out these two notable examples from Andrew Bolt and Chris Kenny over the past week, after Media Watch host Paul Barry hopped into the issue of Rupert’s tweeting about Abbott’s chief of staff Peta Credlin.

However, supposedly independent Bolt, and his not-really-fearless best mate Terry McCrann, will never actually directly and meaningfully criticise the behaviour of their unethical employer, save for acknowledging the bleeding obvious that industrial-scale phone hacking was indefensible.

When have Bolt and McCrann ever said Rupert’s gerrymandered control of News Corp and 21st Century Fox is fundamentally undemocratic and should be unwound?

The Australian’s former media columnist Amanda Meade was a prime example of the culture when she was suspended from her Media Diary column in 2001 for daring to call Rupert Murdoch a “foreigner”. See this Crikey wrap from the time.

There is little prospect that The Australian’s current media writer Darren Davidson will make such a blunder as, together with media editor Sharri Markson, they have taken partisan pro-Murdoch reporting to a whole new level.

Yesterday, Davidson was even trying to claim on Twitter that Saudi billionaire Prince Al-Waleed bin Talal remained a “significant” shareholder in News Corp with just 1% of the voting stock or about 0.4% of the total stock.

The saga of Davidson’s defensive and distorted reporting of last year’s shareholder revolt at News Corp is worth repeating, though the Oz still won’t admit it was wrong, as per today’s Cut & Paste.

Firstly, Davidson is yet to report that his boss completely shut down debate at the AGM and also refused to disclose the proxy votes that would have informed the meeting about the unprecedented shareholder revolt. Rupert was clearly embarrassed about the revolt and tried to cover it up. He did this by waiting for 36 hours before releasing the votes to the Securities and Exchange Commission late on a Friday after trading on Wall Street had closed.

The world’s media completely missed it, until this now-controversial Crikey story on the following Monday asserted that billionaire Saudi Prince Al-Waleed bin Talal had voted to end Rupert’s gerrymandered control over News Corp.

It was statistically impossible for the Prince and the Murdochs to have both voted their stated shareholdings against the hostile shareholder resolution proposing a more democratic one vote one value capital structure.

However, this didn’t stop Davidson downplaying the actual voting numbers — Rupert was nearly rolled with 47% of the voted stock opposing his gerrymandered control — and instead focusing on some weasel words of support from the Prince, who was quoted telling The Australian directly: “We never vote against our partner Mr Murdoch.”

Truth be known, we now know he had already voted with his feet by selling most of his holding to a hostile shareholder who did vote to end Rupert’s gerrymander. Today’s Davidson effort asserts that the debate was based on “a false assumption”. Hang on a minute. News Corp published this “definitive proxy statement” on October 1 last year. On page 31 it provided an update on substantial shareholders with more than 5%, as of September 11, 2014. This showed the Saudi Prince owned 13.184 million voting shares or 6.6% of the total. However, there is a note leading to another page that says the Prince’s holding is only relevant up until December 31, 2013. Why the different treatment for him?

On Wednesday, the Prince finally ended the argument by releasing this clarifying statement that he had sold down to 1% and this “orderly disposal program was predominantly executed in the first half of 2014”.

News Corp is an Australian listed company, and these actions by the Saudi royal family certainly do not comply with our listing rules, which require shareholders who own more than 5% of a company to disclose any 1% move within three days of the transaction.

Why isn’t The Australian demanding action against the Prince, who appears to have secretly sold his News Corp shares without telling his trusted “partner”?

If Murdoch did know about the sell-down, why did News Corp publish inaccurate data in the proxy statement?

If Murdoch actually allowed questions and debate at this year’s News Corp AGM, we might get some answers. Don’t hold your breath for McCrann, Bolt or Davidson to ever write: “Rupert Murdoch should allow unfettered free speech at the News Corp AGM.”

Mayne: even the Saudi Prince has turned on Rupert — not that you’d read it in the media

A right royal kiss-off: the Sun King loses his Prince

Good article, but with one glaring omission: this very Saudi Prince, al-Waleed, was named in The Age, New York Times and other media today as one of the Saudi royals who sponsor Al Qaeda. So here’s Murdoch’s News Corp, the cheerleader/PR firm for the War on Terror, in a business alliance with one of the alleged culprits. This is more than ironic.

Full credit Mr Mayne, you were first to do the math indicating alWaleeds selloff and publicise it, a real scoop that wont be credited in this era. Plutocrats are for grovelling to, don’tcha know? (eg. Bolt, Davidson & McCrann).

@ Robert Barwick – more than ironic, its mind-bending, best label it a conspiracy theory and everybody will thus forget it.