In the 24-hour news cycle, press gallery journalists are under tremendous pressure to be first. Rumours can become tweets -- and stories -- without proper vetting. Is the media to blame for our current political instability? 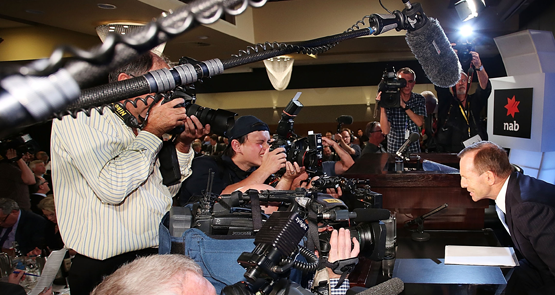 If Tony Abbott is forced to contest the leadership of the Liberal Party, it will be the fifth leadership spill in the federal Labor or Liberal party in the past five years.

Numerous commentators have in recent days highlighted the increasing turbulence of politics. Leadership crises are becoming more frequent, and more damaging to the parties engulfed by them. Not a day goes by without some new heavyweight commentator intoning that a spill is imminent. It is, as Bernard Keane put it on Wednesday, a “leadership crisis on steroids”. And it’s a style of crisis that would have been unimaginable when Kerry-Anne Walsh first joined the press gallery in the early 1990s.

The steroids are the 24-hour news cycle, with the pressure to be first putting the heat on uber-competitive press gallery journos. Some have in recent days been putting things first on Twitter, with a story going up a few minutes later, so strong is the pressure to get the information out there quickly. “There used to be a lot more fact-checking, because you’d be filing once for the next day,” Walsh said. “You’d call more sources, because you had the time. Now, someone just has to whisper in a journalist’s ear, and that becomes a fact on a news website. A lot of things that are put up during the day that could only have come from one or two sources, we’d have rejected in the 1980s. But now journalists have to feed this extraordinary beast.”

The high-stakes competition means every published rumour can be quickly repeated (or, more commonly, retweeted) by others. “That can feed into whatever mischief-making can be done by certain forces within a party,” Walsh said.

This mischief has been a particular focus for Walsh. After decades in the press gallery, she left Fairfax in 2009. In 2013, she released The Stalking of Julia Gillard, which controversially explored how the media had been used as willing pawns in a game to white-ant former prime minister Julia Gillard from the moment she took office. Walsh pulled few punches, naming and shaming journalists like her former Fairfax colleague Peter Hartcher for being, as she put it, “[former PM Kevin] Rudd’s main media mouthpiece” (Hartcher denied this, telling Crikey it was a “conspiracy theory”). But Walsh told Crikey yesterday that she didn’t think this week’s events warranted a sequel. “This is pretty much self-inflicted,” she said. “Abbott certainly hasn’t had the agitators within his party dragging him down like Team Rudd was doing to Gillard.”

It’s a sentiment other’s share. Veteran political journalist Mungo MacCallum told Crikey yesterday that every leadership crisis was different, driven more by personalities than by anything else. He says it makes little sense to compare the troubles of the Liberal Party now with those of Labor in the past decade.

But many have nonetheless highlighted how changes in the media have fed into recent leadership crises. One of those who puts much of the blame for this at the feet of the press gallery is former Labor minister Lindsay Tanner, who left politics in 2010. He wrote in his book Sideshow that the press gallery was obsessed with leadership:

“The media are now unable to cope with reporting national politics outside an immediate election-campaign context without having an impending or actual leadership challenge to occupy them. Whichever party is struggling … is ripe for a period of destabilisation that is actively encouraged by media outlets. Perspective future challengers are carefully groomed and promoted. The Press Gallery can effectively anoint an individual as the Next Big Thing, and energetically promote that person as a future leader: inconsequential speeches become front-page news, and obscure preselection manoeuvres become signposts of future political ascendancy.”

Paula Matthewson, a former advisor to John Howard, doesn’t deny the consequence of the media in such situations. But asked if the media is responsible for the rapid churn of Australian political leaders in recent years, she says she suspects opinion polling may have more to do with it. “Back in the old days, Newspoll only polled in the lead-up to elections. Now we have polls reporting and therefore shaping opinion on an almost weekly basis.” And anyway, she adds, the speed of the media can aid the incumbent as well as the challenger when it comes to leadership spills, if both sides know how to use the media well. “In the old days rumours could be set in train and grow into truths. That’s not really possible these days … I think it’s interesting how a rumour can be quashed within minutes with the advent of online reporting.”

But such rapid reporting does undeniably do one thing, and that’s add to the “atmospherics” of a challenge, as Walsh puts it. Constant updates keep the story front-of-mind for those who care, even though, she says, most of the public doesn’t. “From Bob Hawke on, we’ve had this personality-driven, presidential style of politics. The focus on policy isn’t there as much as it used to be. And if you’re going to focus on personalities, of course you’re going to have more instability in the ranks when things go wrong.”

Leadership instability is, undeniably, a better, sexier story than that of a government united behind its leader. It’s easy to see how this would play into the incentives facing journalists. And once such stories start, they’re driven along by their momentum, Matthewson says. But Walsh says that even if the media is more easily played these days, it won’t have any effect without pre-existing vulnerabilities.

“If a government or opposition is vulnerable because of the leader — due to bad salesmanship or poor policies — then obviously media reporting is going to impact on party unity. But if the government is strong, reporting won’t shake the foundations.”

Gillard v Rudd: the quest for the golden hatchet

Silhouettes against the storm as Labor faces catastrophe

I watched both the Bishop / Pyne / Birmingham interview and then the Hockey interview on Sky News this morning and both media packs were obsessed with the drama of a leadership spill. The way Pyne was treated is particularly shameful when his factually correct and quite innocuous comment on Sunrise that anyone can call a spill at any meeting was taken as confirmation by him that there would be one.

As Luke Simpkins has now announced he is calling one, there needs to be a candidate for there to be a spill.

Unless Turnbull or Bishop is prepared to run, I don’t think there will be a spill. Simpkins will move a motion to have a spill, the motion will be defeated and there will be no spill.

This is the Liberal Party we are talking about. They are quite different form the ALP.

I don’t think that they engineer them – if wishes were spills then journos would drown (Good/Bad – Discuss) – but I reckon they don’t help them; but as long as politicians are hooked on media ecstasy ……?

Old Rupert owner of most of media has had nothing to do with the pending demise of the Anglophiliac in the Lodge.

No amount of opprobrium is too much for Christopher Pyne. A total dud (and my MHR)

Sounds like they were being positivley beastly to the poor boy.
Government is hard. Toughen up, sooks.