Joe Hockey has damaged the independence of the Reserve Bank and left the economy in trouble as bad times loom, Glenn Dyer and Bernard Keane write. 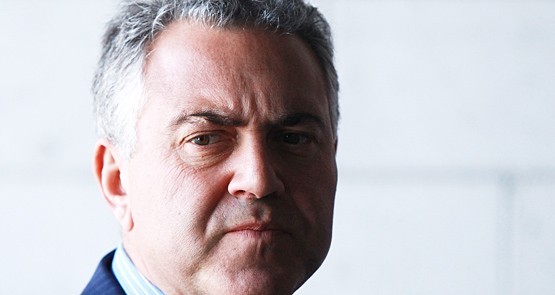 Regardless of when Tony Abbott is dumped as prime minister, Treasurer Joe Hockey should resign, and the sooner the better. He in inflicting too much damage on the economy and is undermining the independence of the Reserve Bank.

An independent RBA is — or should be — one of the Coalition’s proudest economic achievements. It was Peter Costello who enshrined the bank’s independence, a key component of Australia’s strong economic performance since the late 1990s. Now it is being damaged by Hockey. First there was the $8.8 billion unrequested gift to the RBA shortly after the election, part of Hockey’s effort to claim, in defiance of the clear advice of Treasury and the Department of Finance in the Pre-election Economic and Fiscal Outlook, that Labor had left a hidden legacy of debt and deficit.

Now, this week, RBA governor Glenn Stevens has been brought in to address cabinet at the very moment the government is falling apart and the Prime Minister (how goes Abbott, so goes Hockey) is battling to keep his job. Labor never brought Stevens into cabinet, out of concern for the impact on the bank’s independence. No such compunction for Hockey, apparently. Worse, remarkably he sought to claim it was a good thing, saying: “we invited the governor of the Reserve Bank into the cabinet, for the first time he’s visited. He has been governor for years; it’s the first time any government had asked him into the cabinet room, which stunned me …”

What’s stunning in fact is that Stevens has been used as a political prop by a desperate government.

Kevin Rudd and Wayne Swan, particularly when they were dealing with the global financial crisis, were accused, including by Crikey, of using then-Treasury secretary Ken Henry as a kind of human shield as they sought political cover for a bold, but ultimately very successful, defence of the Australian economy. But Henry was Treasury secretary. Treasury isn’t independent, nor is it meant to be — it serves the government of the day. Using the head of the independent Reserve Bank as a political shield is very different, and it is dangerous to the independence of the bank.

It also speaks volumes for how out of his depth new Treasury secretary John Fraser is. Fraser, a former Treasury official who had been at Swiss bank UBS for much of the past decade, was brought in to replace Martin Parkinson, sacked by Abbott over the objections of Hockey as a demonstration of the kind of small-minded partisan bigotry that seems to drive conservative politicians. Fraser has been completely out of the Australian economic policymaking loop, especially in the past three years, when the revenue crunch, a high dollar and volatile terms of trade have hit the budget and the standing of Treasury’s forecasting.

Far from it being “stunning” that Stevens has never addressed cabinet, it’s Fraser’s job to brief cabinet about monetary policy — he sits, ex officio, on the RBA board and attends every meeting. That’s what Henry and Parkinson did — attend each RBA board meeting and then return to Canberra (with their briefing notes) and brief Hockey and his senior advisers, and cabinet if need be, through the Treasurer. The last thing that the economy needs — especially as its political leadership is failing — is a Treasury secretary with training wheels on, which is what Abbott has delivered us.

And while the government is now leaking that, guess what, revenue forecasts are going to be too high yet again — despite Hockey and Mathias Cormann’s claim that the days of dodgy revenue forecasts were over, lines in the sand, etc, etc — the economic narrative Hockey is trying to sell is blatantly false. Hockey argues that the government has “unshackled” the economy compared to the Labor years and that’s a good thing because it now faces international “headwinds” from deflation and lower Chinese growth. Listening to Hockey, you’d think he was a canny mariner who’s trimmed his boat down to deal with the rough water we’re now in.

It is Hockey via the 2014-15 budget, his senior ministerial colleagues who have failed to do the basic job of selling it, and the Prime Minister via a display of political ineptitude so stunning his colleagues are likely to dump him barely halfway through his first term, who have clobbered the economy. Consumer confidence is badly down, non-mining investment is failing to pick up the slack, and economic growth is in retreat. Business is in despair about the government, and that’s feeding through into real-world decisions.

That’s why the Stevens and Co decided that, despite record low interest rates, a highly stimulatory fiscal policy and a dollar well below 80 cents, they had to try to jump start the economy this week. And those international headwinds have only just started to be felt, via commodity prices. The real impacts of global deflation have yet to be felt, especially with German policymakers still living in their Weimar Republic-era fantasy world of inflation dragons.

Far from being in top shape in the face of international problems, the Australian economy is limping badly before the real challenges hit. And responsibility for that lies with Hockey. At this rate, even Scott Morrison couldn’t be any worse.

Pretty good article.
But be careful what you wish for… Scot Morrison???

Agree paddy, Scoot M, such satire, sure to make the latte hit the screen!

And he has broken the law by not complying with the Charter of Budget Honesty.

I hope he faces the appropriate parliamentary sanction.

Morrison is a human Chernobyl, infecting all around him with his vile, sociopathic, radioactive thinking, so I’m sure if made Treasurer he’d find some new and clever way to punish every non-billionaire in the country for the temerity of not being born wealthy.

Thank you for the facts, not the spin being generated by Uncle Joe.
The LNP have sowed the wind in opposition by their repetative 3 word slogans of negativity, now they are reaping the whirlwind of the populace not believing anything they sprout and tea party lite policies.
Who can save poor ship Australia with the Cap’n is asleep at the wheel, and manned by a motley crew.