A right royal kiss-off: the Sun King loses his Prince

Saudi Prince Prince Al-Waleed bin Talal has sold most of his 6.6% stake in Rupert Murdoch's News Corp. Now we know why the Prince did not vote with the Murdochs at the last AGM. 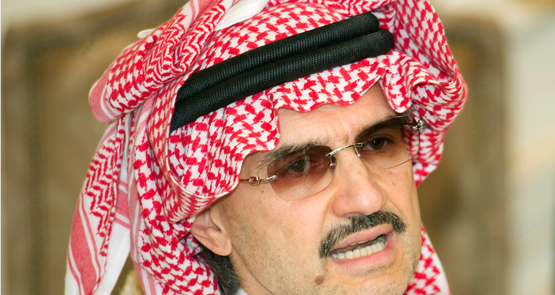 Kismet no more. Rupert Murdoch and his family have lost their Saudi Prince, and the dunes will never be the same again.

Now we know why the Murdoch clan was very nearly rolled at last year’s News Corporation annual meeting in Hollywood on the sticky question of the two-tiered share structure. Rupert’s longtime ally Saudi Prince Prince Al-Waleed bin Talal had abandoned him — not by voting against the Murdochs, but by selling out of most of his 6.6% stake in News’ B-class voting shares.

News of the sale, most of which took place in the first half of 2014 (how’s that for continuous disclosure), broke last night. The Prince’s Kingdom Holding Company told the Saudi stock exchange the company’s stake in News had been reduced from 6.6% to 1%. Kingdom hasn’t sold its 6.6% stake in 21st Century Fox. News Corp issued its statement around 1am today, Sydney time.

The Prince and Kingdom have been Rupert’s strongest supporters for years, especially during the dark days of the 2011 News of the World phone-hacking scandal. His stake, the second-largest in the key voting shares after the 39.4% held by the Murdoch clan, was also pivotal in shareholder votes on other issues at annual meetings in the past five years.

News Corp shareholders staged their largest protest vote so far at the company’s annual meeting in November, when 47% of them backed the ending of the dual share class, which allows the Murdoch family to dominate the company via their 39.4% stake in the B-class voting shares, even though that is only 14% of all shares issued by the company. The A-class shares do not have a vote.

Kingdom said in a statement on Wednesday it had sold most of its News Corp shares in the first half of 2014, which explains why Murdoch’s margin of victory at the November vote was so narrow. Kingdom said:

“During its portfolio review last year, KHC decided to reduce the size of its investment in News Corp via an orderly disposal program that was predominantly executed in the first half of 2014 and successfully completed by the end of the year.”

News Corp’s shares have fallen 13% since the end of June compared with the 4.6% rise in the S&P 500 during the same period. News’ shares closed at US$15.11 in New York, down just 2 cents, so investors didn’t think the news was vital. But that also reflects how little interest Wall Street has in News, with its collection of dead-tree papers, legacy pay TV businesses in Australia and the real jewel, REA Group (which reports tomorrow).

Kingdom said in its statement it had made a profit of around US$187 million from the sale. It is uncertain if the Murdoch clan and News Corp were informed of the sales, or whether the statement overnight was the first they heard of them, like the rest of the market. But if Murdoch and News knew of the sales last year in any way before the meeting in November, should they have revealed it to that meeting? There was an assumption by all concerned that the Prince still held a 6.65% voting stake.

But bin Talal’s move may not worry Rupe and the rest of the family. Murdoch, who has recovered much of his swagger lost during the phone-hacking scandal, has been tweeting daily, advising governments and others in the US, UK and Australia of his views on their performance, as well as issuing advice and making other statements about everyday events. The US government is no longer investigating the empire for a possible breach of the draconian Foreign Corrupt Practices Act; Lachlan Murdoch was named as his successor in March of last year, being elevated to co-chairman of News Corp and 21st Century Fox (with his dad), and the split at the end of June 2013 in the empire has separated the newspapers from the growth assets in Fox, generating billions of dollars in extra value for shareholders, led by the family.

News Corp, which reports its fourth-quarter results on Friday morning, our time, owns newspapers in the US, UK and Australia, as well as book publishers HarperCollins, the Foxtel and Fox Sports in Australia, REA and the modest education venture Amplify. It has a market capitalisation of about US$8.9 billion.

No mention or discussion of who bought the stake?

And did the new owner simply abstain from voting in November? (Aren’t such votes in an AGM for a public company, open? Last November Stephen Mayne wrote: For all we know, bin Talal could have voted against Rupert, too.” So, I suppose no, these things are not transparent!)

And how can the sale of such a large stake in such a prominent public company remain secret for so long? Presumably that indicates it was a sale to a similar entity, ie. some other mega-rich individual or secretive sovereign fund?

I see that the execrable Cut&Paste has picked up on this story as an opportunity to knife Mayne. Yet I am no clearer.
Surely Kingdom Holding could not have legally voted in the November AGM if it had sold the shares? Unless it had some kind of proxy from the new owners? (And no one is mentioning who bought the stake!!! FFS!) Aren’t there transparent share registeries for these large public companies? Are we really obliged to go to Kingdom’s website and believe a claim made there, rather than know the truth via company information on the AGM?

OTOH, this may well be why News Corp relocated its legal residence to Delaware?

Incidentally the link on the Bloomberg story (which appears to be what all other news articles are copying) to the Kingdom site for the Prince’s statement is dead.