What does it mean to "do an Abbott"? ... Sexy Scott Ludlam title called into doubt ... Seeing the PM's face everywhere ...

Locks of love, or money? We received this tip yesterday from someone who thinks they might have found the secret to Western Australian Greens Senator Scott Ludlam’s famous hair:

“Spotted: someone with an uncanny resemblance to Scott Ludlam exiting an Advanced Hair studio recently. At last — the secret to the Senator’s luscious locks. Is an endorsement offer a la Warnie in the works? Yeah yeah!”

Ms Tips was very concerned by such an allegation — Ludlam was voted Crikey‘s Sexiest Politician 2014, but would he be disqualified if his hair had chemical assistance? We took it to the Senator, who told us:

“If my hair has been visiting Advanced Hair studios it has been doing it without my consent. These rumours need to stop. It’s back-to-work Wednesday.”

While Ludlam’s hair sometimes appears to have a mind of its own (by itself it nearly knocked perennial Crikey Sexiest Pollie Malcolm Turnbull off his perch in 2013), we’re taking that as a no. As you were.

Captain’s call. Usually an interview with Ray Hadley on 2GB to talk about national security issues would be an easy interview for the Prime Minister, but with the threat of a leadership spill still swirling it wasn’t a walk in the park. Hadley even told the PM his friends had invented a new vernacular: “Doing an Abbott?” the Prime Minister offered, before Hadley told him they called it a “captain’s call”. That gave Bill Shorten his latest zinger on a plate, but it got us thinking, if “doing an Abbott?” is stuffing something up, what can we name after other pollies? “Doing a Shorten” would have to be insulting someone with the force of a wet lettuce and “doing a Bishop” would mean having very strong emoji game. Is “doing a Hockey” smoking a cigar at just the wrong moment? What is “doing a Malcolm”? Challenging for leadership? We’ll have to wait and see — if you’ve got any idea for any of our pollies, let us know.

Nothing to see here. Speaking of leadership spills, the Northern Territory government is showing us all how to do it in the most bizarre way possible. It was announced last night that Adam Giles would be staying on as Chief Minister, with challenger Willem Westra van Holthe given the position of Deputy. While it seems like a classic example of keeping your friends close and your enemies closer, we wonder if Tony Abbott is looking north for tips to stay in his job. While most territorians are still trying to work out what happened over the past few days, the website of the Country Liberal Party says it all: 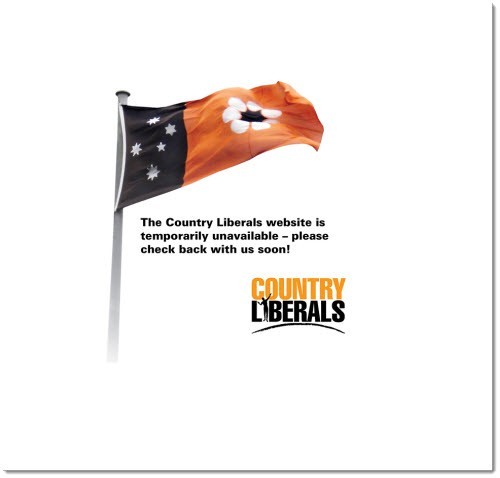 All in the family. We hear from a tipster that the Victorian branch of the ALP has already emailed its members to alert them to the timetable for preselecting federal candidates for the 2016 election. Seeing the dates in our inbox was just as discomfiting as the Easter eggs that have been in the supermarkets for weeks already — time just flies when you’re having fun. On the dates passed on to Crikey, ballots will close in May this year — giving the opposition a good run-up time in case an early election is called. Another tipster has alerted us to one prospective candidate — Davydd Griffiths, who tweeted on Sunday that he would be running for preselection in the federal seat of Melbourne. The seat, which was a safe Labor seat until the Greens’ Adam Bandt was elected in 2007, covers the area of the state seat of Melbourne, which also passed into the hands of the Greens last year. Griffiths is the husband of Jennifer Kanis, the state MP ousted by the Greens’ Ellen Sandell. The Greens have poured money into the area in recent elections, so if Griffiths get the gig he will have an uphill battle against Bandt. If only Kanis had maintained her place in Parliament, they could have had a chance at becoming the Anthony Albanese and Carmel Tebutt of Melbourne.

Not a no, not a yes … Yesterday we heard from a tipster that Jackie Trad was in line to be deputy premier of Queensland if Annastacia Palaszczuk managed to wrangle a minority government. We didn’t hear back from Trad until yesterday afternoon, who didn’t deny the rumour, but didn’t confirm it either:

“While focused on the count being finalised in outstanding seats, Labor stands ready to implement our agenda of creating jobs and keeping our assets in public hands. I will be honoured to serve Labor in whatever capacity Annastacia Palaszczuk asks me to. Once again, I want to place on record my gratitude to the people of South Brisbane for electing me their representative in the Queensland Parliament.”

Even though Queensland doesn’t seem to be any closer to having a government, that sounds like a job application to us.

Support Palestine? No thanks. The National Australia Bank has politely batted away an invitation from former Palestinian ambassador Ali Kazak to host a trade delegation to Palestine, donate to a children’s hospital in Palestine, or support the upcoming Palestine Exhibition. Kazak, who is managing director of Canberra-based Palestine Publications, wrote to the NAB after controversy over the visit by former CEO Cameron Clyne to host a trade mission to Israel last July, in the middle of  a bloody war in Gaza. As one mission delegate told BRW: “It was very interesting because the Israelis were exceptionally emotional that we the Australians still came, while most of the other delegations had cancelled.” Objecting to NAB’s political and financial support for Israel, Kazak wrote to NAB chief Clyne (since replaced by Andrew Thorburn) and after months got a letter back on January 7, from Dallas McInerney, GM of government affairs and public policy, who thanked him for the correspondence and wrote, inter alia:

“The NAB maintains offices in Europe, North America, and Asia, as well as supporting its customers activities across global markets. Trade missions have proven beneficial in this regard, and will remain so into the future. While NAB does not have current plans to support the entity you referred to in our discussions, we appreciate you taking the time to provide the bank with your views”.

Kazak replied to NAB but, after failing to receive a response, yesterday he issued a press release published here. “They didn’t address the issue,” Kazak told Crikey today. “They just said ‘We’re happy with what we’re doing, go away’. Correct  me if I’m wrong, but banks should not be involved in politics, let alone with countries which are occupying other people’s countries and oppressing them and denying their rights.”

Tony Abbott toilet paper. An enterprising young lad has found a way to make money from his distaste with the Prime Minister. This crowdfunding effort started this week and is selling toilet roles bearing the face of Tony Abbott, or “Tony Crappitt”, as the founder so creatively calls him. We’re not sure how successful it will be, but we hope the PM admires the young man for being a lifter, not a leaner. 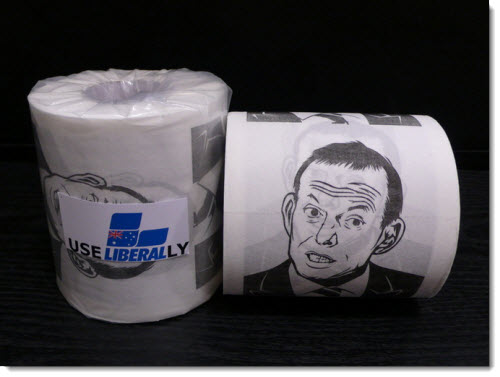 Does that kid do a line in “Merde-Och” bog rolls?
[As for “lifter” or “leaner”? Reckon Abbott cares if he “front or side swipes”?]

Hadley wouldn’t have played Billy Field while Toady was there?
[“…. When I get the urge
I just got to splurge
I’m a slave to all my desires.
Well I’m in a mess
‘Cause I can’t repress all of these
Bad Abbott’s…”?]

That enterprising young lad with his rolls
With Abbott all but flushed in the polls?
Now I don’t want to gripe,
But with that sort of swipe
He’d be a leaner for sure when all’s told?

Surely “doing a Bishop” would mean “to stare with the force of a thousand dying suns”?

Well, the Abbott toilet paper could also include a roll or two of his signature policies.