The Reserve Bank's panic move to reverse course on interest rates demonstrates how much impact the goverment's woes have had on the real economy, Glenn Dyer and Bernard Keane write. 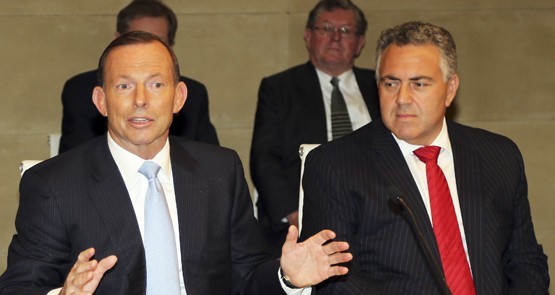 There’s more than a whiff of panic to yesterday’s rate cut by the Reserve Bank, in everything from the poor explanation for the sudden change in policy, to the fallback on its much-criticised ploy of using media favourites to signal to markets, to Glenn Stevens briefing cabinet at the Treasurer’s request.

Indeed, you could argue that the RBA, in its hurried reversal last week of its “prudent course” of stable rates by briefing News Corporation’s Terry McCrann of a looming cut after the December quarter inflation figures showed slightly stronger-than-expected core inflation and the market had ruled out such a cut, has lost control of monetary policy. The McCrann column also prompted a surge in share prices on Thursday, Friday and Monday, and they surged again after the cut was announced at 2.30pm yesterday. The Aussie dollar plunged under 77 US cents, losing 2% very quickly. And market economists are already baying for one or two more cuts.

For most people, which journos the RBA favours doesn’t matter. But it is important the RBA is trusted by all concerned, from politicians to bankers and economists, to commentators who carry the task, with greater or lesser success, of explaining monetary policy to consumers. That trust is vital when the RBA comes to raise rates, which hit not just consumers but banks, business and, indeed, politicians. Falling back on giving McCrann the good oil ahead of time means that business economists and the markets will now be watching everything he writes on the RBA, rather than focusing on what the bank is saying through its extensive program of public communication.

The bank will now need to start regaining trust through its suite of coming engagements — the Statement of Monetary Policy on Friday and a series of speaking engagements and parliamentary committee appearances next week for governor Glenn Stevens, deputy Phil Lowe and assistant governors Guy Debelle and Chris Kent.

The bank’s reasons for the dramatic shift of stance on rate cuts by the central bank was “explained” in three paragraphs in yesterday’s statement:

“In Australia the available information suggests that growth is continuing at a below-trend pace, with domestic demand growth overall quite weak. As a result, the unemployment rate has gradually moved higher over the past year.

“The fall in energy prices can be expected to offer significant support to consumer spending, but at the same time the decline in the terms of trade is reducing income growth. Overall, the Bank’s assessment is that output growth will probably remain a little below trend for somewhat longer, and the rate of unemployment peak a little higher, than earlier expected. The economy is likely to be operating with a degree of spare capacity for some time yet.”

And at the end:

“For the past year and a half, the cash rate has been stable, as the Board has taken time to assess the effects of the substantial easing in policy that had already been put in place and monitored developments in Australia and abroad. At today’s meeting, taking into account the flow of recent information and updated forecasts, the Board judged that, on balance, a further reduction in the cash rate was appropriate. This action is expected to add some further support to demand, so as to foster sustainable growth and inflation outcomes consistent with the target.”

But despite that last reference to the bank taking the time to assess the effects of the record low interest rates already in place and “recent information and updated forecasts”, exactly what has prompted the shift away from the bank’s “prudent course” isn’t fully clear from the statement. One can only assume the bank is looking ahead and sees the economy slowing further in coming months — the possibility of a quarter or two of negative growth can’t be ruled out on the basis of these comments.

As Joe Hockey so correctly observed in August 2013, “if interest rates come down today, it is because the economy is struggling, not because it’s doing well”.

Bear in mind the economic context for the decision — Hockey has not merely left in place the stimulatory fiscal settings he inherited from Labor, he has increased the level of stimulus by tens of billions of dollars over 2014-15 and (as currently forecast) 2015-16; interest rates have already been at record lows for 18 months and at low levels for much longer, and the dollar is now around US30 cents below the sort of levels where it made Wayne Swan’s life hell a couple of years ago.

The record low rates, however, while they stimulated the home building sector, also pumped up the existing housing market, leading to big price rises and fears of a price bubble, provided little help elsewhere in the economy. The bank now thus sees the jobs market worsening, despite recent better news on jobs from the ABS. The peak for unemployment wasn’t given by the bank in yesterday’s statement, but the Mid-year Economic and Fiscal Outlook in December shifted Treasury’s prediction from 6.25 to 6.5 over the course of this year and the next. Evidently the RBA agrees with that — or even that unemployment will be worse.

For that outcome, we can look to Tony Abbott and Joe Hockey, whose appalling 2014-15 budget and the constant bumbling of their government has smashed business and consumer confidence and turned a strong start to 2014 into a mire of weak sentiment, timid investors and economic gloom. If they really believed their own economic rhetoric, the best thing Abbott and Hockey could do to stimulate the economy is quit and let Malcolm Turnbull and Julie Bishop try to spark some life into the economy. It’s very hard to see consumer and business sentiment lifting while Abbott and Hockey remain.

And if they do remain, they’ll have to frame a budget — and Abbott’s desperate “families assistance package” electoral bribery — with lower growth and lower revenue yet again. Stimulating non-resource business investment remains the single most important policy the budget can make that will help the wider economy. It should have been in place since May last year. Instead the government has slashed and hacked at these sorts of incentives and, despite Abbott’s pretensions to being an “infrastructure Prime Minister”, infrastructure investment nationally has declined markedly from the levels under Labor.

One more point: with the dollar getting smashed yesterday in response to the rate cut, and likely to remain at or below its current range while the talk is of further cuts, the dollar looks likely to go below the sort of “fair value” that Glenn Stevens used to talk about of US75 cents. It looks like li’l old Australia is joining in the currency wars that have been spreading across the globe. It’ll be great for exporters and trade-exposed industries — but the appreciation of the Aussie dollar has been a big factor in the rise in productivity in the economy in the last couple of years as businesses and workers faced the reality of having to compete with lower-priced foreign competitors.

With the dollar back down again, lazy businesses, trade unions and shareholders can go back to the bad old days of letting the currency provide their competitive edge.

Is the dollar danger over? And what happens if it isn’t?

I noted that Joe Hockey took some of the credit for this decision, alluding to the low inflation that they had brought about.

Apparently they are responsible for the drop in world oil prices. They are good.

But they can claim credit for running business confidence into the ground, and in that sense they should take some credit for this rate drop.

Pity about Joe constantly being hoist on his own quotes.

And self-funded retirees who are reliant on reasonable interest rates have been further shafted. There’s no way they’ll be pumping more spending into the economy.

The idea that a high currency is a natural state of affairs for Australia is ridiculous.

The accompanying idea that a lower currency means lazy businesses and trade unions etc shows a profound misunderstanding of the significance of the “Gregory effect”.