The Liberal leadership dynamic is now playing out at speeds never seen before, with the political-media cycle shifting repeatedly through the course of a single day. 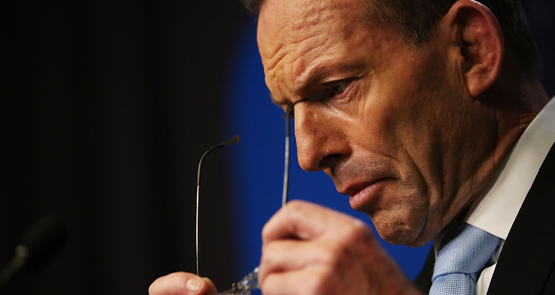 The ebb and flow of Tony Abbott’s leadership fortunes yesterday played out a dynamic that used to take days or weeks. Courtesy of strong briefing to newspapers and media appearances in Abbott’s favour by ministers like Peter Dutton, Joe Hockey and Scott Morrison, the day began with the loyalists on the front foot. Hockey, of course, is totally locked in behind Abbott because when Abbott goes, he goes, and Morrison needs to prop Abbott up for as long as possible so he can elevate his own chances of the leadership above their current miserable level — just 4% of Liberal voters would like him as leader, suggesting Morrison’s ambitions exponentially outstretch his capacities.

Then Abbott, showing all the deft political footwork that has placed him in danger of being dumped from the prime ministership less than 18 months into it, promptly ruined all that by refusing to say if he’d demanded a loyalty commitment from Julie Bishop, despite multiple questions from Chris … er, Kochie on Sunrise. With reports Bishop had declined to promise no challenge, that led to hours of speculation about the Foreign Minister. That then had to be tamped down with leaks from cabinet to several journalists that Bishop had given a carefully phrased assurance to Abbott that she wouldn’t be challenging him — though leaving herself the out of throwing her hat in the ring if someone else did.

So by mid-afternoon, the Bishop bushfire that Abbott had set off in the morning had been brought under control. “Back-to-work Tuesday” was again the official line. But that lasted only until yesterday evening, when the insurgents launched another raid, with Dennis Jensen and Warren Entsch again voicing the frustrations of, reportedly, a large chunk of the backbench (a place where Jensen firmly believes he doesn’t belong) and suggested a change of leadership, while Mal Brough, another, um, malcontent, stirred the pot as well. Nationals MPs then emerged to pre-emptively bag Malcolm Turnbull, whom they can’t abide.

The same cycle is playing out right now, with a further mea culpa from Abbott this morning, an admission he’d “bitten off more than he could chew”, a demand that everyone focus on policy rather than personalities, and assurances from loyalists (Hockey, Pyne) that cabinet was rock-solid behind the Prime Minister and switching leaders was a bad idea. This time, however, the new fire that broke out wasn’t accidentally started by Abbott, but by unconfirmed reports Turnbull had begun calling backbenchers seeking their support, or alternatively that Turnbull had been contacted — a very different thing — by a range of colleagues about challenging.

The timing of the reports, while Turnbull was participating in a day-long cabinet meeting designed to both shape the government’s agenda for the year and address Australia’s suddenly weaker economic position, couldn’t have been worse. Nor is it clear the claims suit the purposes of either Turnbull or Abbott loyalists — suggesting freelancing backbenchers (who used to cause so much trouble for Julia Gillard with and without Kevin Rudd’s approval) are behind them. But nothing is confirmed; there’s still no challenger or stalking horse to precipitate a spill, just the febrile whispers and muttering of a media-political cycle accelerating further from an already unprecedented speed.

Ah yes, “back to work, Tuesday”. Which will be followed by, ‘everybody just shut the f### up, Wednesday’, ‘listening: but refusing to answer all questions, Thursday’, and to end the week, ‘why are you looking at me, pal? Friday’.
Next week will be kicked off with, ‘no, I’m still at home, because didn’t effing Abbott say that we didn’t have to come back till Tuesday, Monday’.

BERNARD K: “Morrison needs to prop Abbott up for as long as possible so he can elevate his own chances of the leadership above their current miserable level — just 4% of Liberal voters would like him as leader, suggesting Morrison’s ambitions exponentially outstretch his capacities.” Brilliant, just brilliant Mister K. 🙂

Little Mzz Julie Bishop must be desperate to get the job, after all it was a Labor Party member, and a woman, who beat her to become the first female Prime Minister.

This could not happen to a more deserving chap.

I too loved the “ambitions exponentially outstretched his capabilities” Unfortunately, none of these clowns seem to understand that they were elected by their constituents to represent the wishes of the constituents. This leadership debacle is a nonsense. No one on the front bench has any leadership abilities. If they are stirring up the bank bench to start the riot, they are nothing but gutless opportunists. That is not leadership.
It seems that all the media is happy to concentrate on this “leadership” diversion which takes everyones’ eyes off what the Australian people want. I think they want 1. An equitable go at life 2. Corporations and the wealthy to pay their fair share of taxes. 3 Good education 4. Good health care. 5. Good public transportation. 6 A sovereign fund that collects and preserves natural resource taxes for future generations.7. The removal of corporate , wealthy individuals and union donations to political parties. Just try a couple of those suggestions and see how we go. Forget leadership for now. None of the politicians have it or would recognise it.