Spills all round have kept pundits talking on air and online.

Anyone who thought this week might be a bit calmer for the Prime Minister after the Australia Day princely shemozzle was about as wrong as you can be, just as pretty much all the polls and the pundits were wrong ahead of the extraordinary Queensland election result which sees outgoing Queensland Premier Campbell Newman in this list for the last time.

The Queensland result brought intense pressure on Tony Abbott, with the press gallery having no difficulty at all in finding federal Liberal backbenchers happy to talk about the failings of their leader, Mal Brough even ready to challenge himself, while some ministers tried to pretend none of it was happening and others called on Foreign Minister Julie Bishop and Communications Minister Malcolm Turnbull to publicly declare they would not challenge. You can’t help sense a little bit of glee among some political journos that the ground that they are most familiar with over the past five years, leadership speculation, is once again the main game in town. Much more fun than examining policy.

And meanwhile there was the actual result in Queensland, Campbell Newman easily losing his inner-Brisbane seat, as many had expected, but also the LNP clearly losing a majority, which no-one had expected. A few regional seats including the potential zombie-like return of Pauline Hanson will now decide whether the Labor Party can sneak over the line with a one seat majority or whether Katter’s Australia Party and independent Peter Wellington will hold the balance of power.

Even when all around seems political chaos, the Northern Territory can somehow manage to trump them all with an overnight coup that wasn’t, Chief Minister Adam Giles brushing off the mere inconvenience of losing a party room ballot, refusing to resign and ending up still the Chief Minister. We’re pretty sure it all came down to a bit of crocodile wrestling in the back bar. Can’t wait for next week … 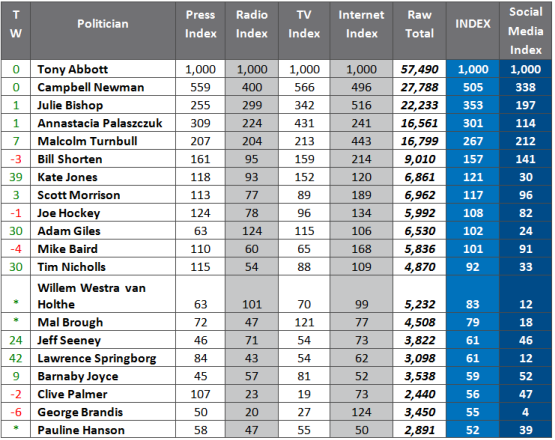 The PM undoubtedly still has defenders in talkback land, but his leadership does seem to have split the right like nothing else since perhaps gun laws.

A mere 160,000 or so mentions for Tony Abbott on social media over the past seven days, around ten times more than those who might have his job both from his side and across the aisle. If he does go, what will they tweet about?

Football in Australia is riding its highest high so far after an extremely successful Asian Cup tournament had the best possible ending for the home fans. The blending of now household names like Jedinak, Cahill, Luongo and Postecoglou seems like a powerful statement about the future of the code in Australia.

Isentia Index: the phoney war inside the government confuses everyone