Hockey bets it all on a rate cut, but will the banks save his bacon?

The banks haven't a leg to stand on when it comes to claiming they can't pass on the RBA's rate cut in full. But they might withhold some of it anyway. 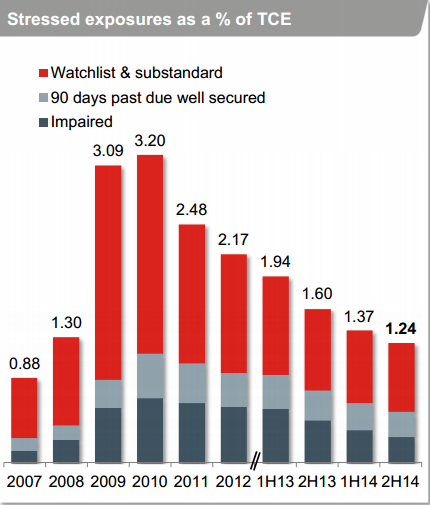 Back in November a little-noticed graph in Westpac’s 2014 profit result told an important story: the proportion of bad or worrisome loans on the banks books — in the jargon, stressed exposures as a percentage of TCE or total committed exposures — had dropped below 2008 levels, to 1.24%. That is to say, Westpac had weathered the storm, the crisis was over. Rounding out the picture of a healthy bank were lower wholesale funding costs, higher net interest margins and record profits. And of course, Westpac and the other big banks had emerged from the crisis with much less competition from smaller and non-bank lenders.

Which is a roundabout way of saying the big banks did not have a leg to stand on when it came to passing on yesterday’s 0.25 percentage point cut to the official cash rate by the Reserve Bank. As though his life depended on it, Treasurer Joe Hockey made that crystal clear in his press conference yesterday afternoon, and you could hear the urgency in his voice on ABC Radio this morning:

The Commonwealth Bank was the first of the big four to move this morning, cutting standard variable home loan rates by 0.25 percentage points (and, interestingly, five-year fixed rates by 0.3 percentage points). Westpac quickly cut by an even higher 0.28 percentage points, and NAB, which has its rates under review, is certain to follow. ANZ customers will have to hold their breath since chief Mike Smith announced a year ago a stand-offish, stick-in-the-mud policy of waiting until Fridays (three days after the RBA meets each month) to announce any changes to interest rates, to stop bank-bashing treasurers, shadow treasurers and journalists berating the bank within seconds of any official rates move.

As they cut rates more or less in lockstep, however, the banks might be permitted a private grumble about mixed signals coming from the federal government and regulators. On one hand, David Murray’s Financial System Inquiry has just recommended the banks tighten home loan risk weights and retain higher levels of capital, to prevent another “too big to fail” moment requiring the kind of public bailout we saw in Australia with the bank deposit and wholesale funding guarantees or (much worse) in the United States, where the government spent trillions buying troubled assets and the Fed took equity stakes in the likes of Citigroup and Goldman Sachs to recapitalise them. The same pressure is felt internationally from the Financial Stability Board for example, and Australia’s big four — still among the world’s biggest banks — are key players in the debate.

Furthermore, the banks are being asked by Australian Prudential Regulation Authority — quite rightly, as Crikey has argued — to toughen lending standards, particularly for those low- or no-deposit home loans originated by mortgage brokers on sales commission incentivised to maximise volume. As house prices surge — entering “new paradigm” territory with the likes of real estate agent John McGrath tipping that inner-Sydney suburbs will be “hot forever” — and self-managed super funds pile in, reducing housing affordability, right when income and jobs growth are receding, the systemic risk represented by some kind of house price slump increases. Tighter “macro-prudential” controls will hurt first home buyers struggling to get into the market, but they are necessary to stop borrowers over-committing on the false premise that prices only move in one direction.

On the other hand, despite this hawkish regulatory tendency, the second the RBA loosens monetary policy, we find ourselves screaming at the banks to “pass it on this instant!”. When it comes to the crunch, we all want easier money.

US banking fantasyland, where a debt is an asset