The Press Council chair only mentioned News Corp once in his speech to the Press Club today. But read between the lines, and it was a pointed criticism of the organisation's hypocrisy on free speech. 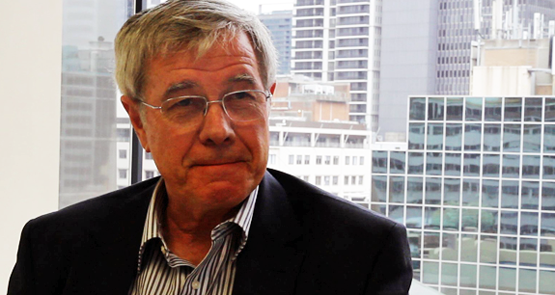 Julian Disney’s speech delivered at the Press Club today makes only one explicit mention of News Corporation. But the publisher, which last year repeatedly criticised the Press Council chairman over the Press Council’s direction under his leadership, will probably — and not without cause — take what Disney said as a scathing criticism of its editorial practices. The closing comments will be seen as a grenade, thrown by Disney just four weeks before he hands over his position to incoming chair David Weisbrot.

Society does not enjoy genuine freedom of speech unless it is interpreted far more widely than the freedom of the press, Disney said, adding that publishers can do much to stifle free speech:

Publications can “gravely damage or deny” other people’s free speech by “repeatedly and seriously misrepresenting what a person has said”, by “repeatedly abusing or intimidating a person with whose views it disagrees, by “breaching without good cause the confidentiality of a person who wished to exercise their freedom of speech in private”, or by “publishing seriously false or misleading information” that leads others to hold views about a person they wouldn’t otherwise hold if accurately informed.

“If a publication repeatedly and flagrantly engages in these kinds of practices, can it credibly portray itself as a defender of free speech? Or is it only a supporter of free speech for people with whom it agrees or whom it seeks to support?

“Some of the greatest obstacles to achieving and sustaining genuine freedoms are extremism and hypocrisy by people who prominently propound them and have privileged opportunities to exercise them. This applies especially to freedom of speech and of the press, which are far too important to be put at risk in this way.”

Disney took aim at publishers that have expressed a desire to see the Press Council play a more active role in promoting the free press instead of what they perceive as its efforts to tie that press down in answering frivolous and unnecessary complaints.

The Press Council formally has a dual mandate — to both uphold standards in the non-broadcast press while also promoting press freedom. But Disney acknowledged press freedom was not a priority for the council he led, nor, he believes, should be.

“The council’s main and unique contribution to the cause of press freedom is its core work of developing standards of media practice and responding to complaints about possible breaches. This role necessarily consumes the dominant share of the council’s resources … It is not appropriate or reasonable to become heavily involved in particular campaigns to which major media outlets or other powerful organisations can devote resources and influence.”

And where press freedom is challenged, Disney continued, the council would be better served focusing on areas that are not directly campaigned on by major publishers. He gave a few examples of this, including governments that give closely aligned publications advance access to key information and policies ahead of other media and the general public, government leaks of announcements to friendly press outlets on the condition that they don’t seek comment from all sides before publication, major organisations setting up their own newsrooms and giving them access to key information not given to other outlets, and the financial difficulties of major publishers that risk making them especially vulnerable to demands for favourable coverage in return for advertising.

Issues such as this, Disney said, did not get major public attention, but posed a chilling effect on press freedom nonetheless:

“It is important that the council’s statements on issues of press freedom avoid seeming to be docile echoes of publishers’ views rather than fairly conveying the views of its diverse members.”

In questions, asked to identify publishers who’d been helpful to the Press Council and those who hadn’t been, Disney initially declined to name names. “My role is to talk of principles and media standards,” he said, before admitting that in its public statements in the past, the Council had expressed “strong concern about The Australian’s role last year”. “That’s on the records — we had very strong concerns”.

Oz legal editor Chris Merritt was one of those in attendance and asked Disney whether the Press Council’s own actions had discouraged new members, which Disney had earlier said was one of his goals. Disney disagree with the criticism, saying the five new members who’d joined since the Finklestein review were proof this wasn’t the case.

Disney also controversially expressed a desire to see the Press Council investigate issues in the press even in the absence of a formal complaint, quoting editor and Press Council member David Bowman who said that its current complaints profess is why “a good many peccadilloes have become the subject of public complaint against the press while nearly all the big crimes go unremarked”.

Doesn’t
[(The Right to use your media dominance any way you like x
the right to be free of neutrality +
the Right to be partisan in editing “public interest”/what the rubes get to see) x
the Right to feed intolerance/(ignorance
+ prejudice) = “Press Freedom”?]
That’s the formula for our viewspapers here in Qld?

About time some in the print media stood up to Murdoch! In qld our major daily is News Ltd, most of the provincial papers seem to be Murdochs. The man is one scary individual. Remember he was one of the first visitors at 10 Downing St when Cameron moved in, I bet they didn’t discuss the weather! Also remember the meeting with then opposition leader Tony Abbott, before the election where Abbott and Reinhardt outlined their agenda for Abbott to follow.

The man who should be our first President when we become a Republic.

^ Hear, hear! Professor Disney is an inspiration. Good luck to him in his future positions, I hope he continues to contribute to public life.