Leadership specualtion in Canberra and Queensland ... effects of IT stuff ups in NSW ... how accurate is Punxsutawney Phil?

Smart and skilled a bit dumb. The rollout of the Smart and Skilled program and its problem-plagued computer system has already been reported, with students struggling to enrol or get copies of academic transcripts. We hear from a tipster that the chaos could have been avoided:

“The new system was put in place with the full knowledge that it was faulty, not anywhere ready and fundamentally flawed. The person/s (winning tender?) responsible were paid aprx. $50 million upfront, and have since left the project. This is the information I have heard from TAFE’s finance section. Under the new Smart & Skilled reforms funding is dependent upon student numbers. No enrolments means no funding, which means no employment (I would estimate aprx 80% of TAFE staff are casual, temp or contractors). At the TAFE where I am, I have seen major staff losses across the entire college: teachers, support staff, operations staff (e.g. security, cleaning, maintenance etc). Staff have also verbally been warned not to speak to media.”

We put our tip-off to the NSW Department of Education and were told it was rubbish — according to the department, no such company was paid upfront, and the problems with the system were not known before its implementation. It looks like the NSW opposition will be putting pressure on the government over the issue, so we doubt this is the last we hear about it.

Leadership speculation. Throughout the last few months we’ve had many tips on who will be the next premier of Queensland — like us, our tipsters assumed it would be a member of the LNP. With it looking more and more likely that Labor will form government, the attention of our tipsters has turned to the role of Deputy Premier under Labor’s Annastacia Palaszczuk. We hear from a tipster that Jackie Trad will be the woman for the job, after the party’s deputy position was made vacant by Tim Mulherin, who announced his retirement last month. We asked Trad if she had put her hand up for the role, but didn’t hear back by deadline.

Champagne views. While the Liberal Party implodes under the weight of leadership speculation, we hear this from a tipster who has long seen the name Tony Abbott on a ballot paper:

“Those of us who voted against Tony Abbott becoming SRC President at Sydney Uni in 1979 (unsuccessfully, as it turned out) are putting champagne on ice for when he is finally deposed as PM … it’s only taken 36 years! I have a bottle of Moet which someone gave me for Christmas but I’ve saved it for this, went into the fridge this morning … Interesting that we have seen no sign of any of the daughters since the Frances Abbott scandal …”

Spill watchers would have been taken by surprise after the Northern Territory government decided to ditch Adam Giles to avoid a Queensland-style rout, installing Willem Westra van Holthe as chief minister. It means that just two of Australia’s state leaders have been in their jobs longer than a year — Jay Wetherill and Colin Barnett. If Tony Abbott does get rolled, they’ll be the most experienced leaders at the next Council of Australian Governments meeting.

The wisdom of crowds. If you want to know what the insiders are thinking, maybe giving them a chance to profit from their knowledge is the way to go. The Monthly has since the end of last week been running a little betting pool on when Tony Abbott will finally walk the plank. Guess closest to the date of his departure and get $1000 in cash. What do The Monthly’s influential readers think will be the date Abbott gets pushed? A little birdie told Ms Tips (well, sort of, it was editor Nick Feik) that the vast majority of those entering don’t see Abbott in his job past the middle of this year, despite the fact that if he holds on until January 1 the prize will jackpot to $2000. “A sizable cluster are prophesying the end will come in mid-Feb,” Feik said, with the favourite to replace Abbott being Malcolm Turnbull. Surprisingly, three votes have been lodged for Christopher Pyne. We’re looking at you, Dennis Shanahan.

Tweet tweet. Q&A, the show everyone loves to hate, returned yesterday, with a brand-new set to boot. ABC waste monitor (formal title Oz media editor) Sharri Markson was quickly tweeting about whether it was appropriate for the public broadcaster to be spending money on a new set when its journalists were losing their jobs. Crikey tried and failed to get a ballpark figure of the new set’s price this morning, but we do know the four screens now blaring tweets at the in-studio audience set the ABC back around $12,000. There were 35,000 tweets during last night’s show, which is higher than the 25,000 or so the show usually gets. The point of the screens was to give the in-studio audience a way to be plugged into the Twitter conversation, enabling them to gauge how the punters were reacting at home. Mind you, not everyone loved the tweets — even BuzzFeed’s Mark De Stefano (i.e. Mr Internet) wondered if Q&A had gone overboard, urging it to “be a TV show”. Insiders tell us it was unfortunate the in-studio screens were aired along with the TV-only Twitter banner down the bottom but said this was likely a teething issue. It’s not the intention to give home viewers a double shot of tweets, after all.

Wanna bet? It started in October last year when psephologist, philosopher and Crikey contributor Charles Richardson wrote that minor parties had little chance of being elected in Victoria’s November poll — a claim rubbished by preference whisperer Glenn Druery. Fast forward a few months (the full story is here), and Victoria has five upper house MPs from minor parties, and the bottle of wine they signed has been auctioned, with the final price of $400 donated directly to Camp Quality. Our lucky winner Matt Hingerty, CEO of Barton Deakin Government Relations, picked up his prize from the Crikey bunker yesterday. 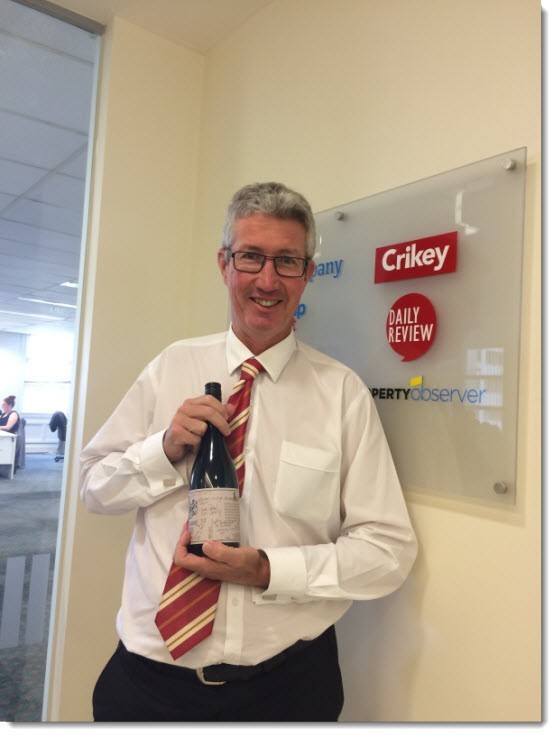 Another tipster has also got in touch to point out a small item in the most recent newsletter from Victoria’s liquor regulator, which includes a helpful guide on page seven on how to “give away” alcohol without a licence. Maybe they’re giving us a hint there.

Cold and grey for the rest of your life. Yesterday was Groundhog Day in the United States, where onlookers gather at the wonderfully named Gobbler’s Knob in Punxsutawney, Pennsylvania, to find out if spring would come early — all based on whether a single groundhog, known as Punxsutawney Phil, can see his shadow. For those who may be heading to the US in the next six weeks, Phil is predicting more winter-like conditions, but according to site MentalFloss and data from the National Climatic Data Center he doesn’t actually have a great track record:

“Phil has predicted 100% correctly in only five of the 26 years the National Climatic Data Center analyzed (1990, 1995, 1997, 1999, 2014). Other than in 2014, he only nailed the years in which he forecasted an early spring. Considering the contiguous United States just experienced its 18th consecutive year with an above-average annual temperature, Phil may be wise to play the numbers and always predict an early spring.

“Then again, perhaps we expect too much from a marmot with no access to nationwide climate data.”