Today's Essential Report shows Malcolm Turnbull is still the preferred leader of the Liberal Party, but Julie Bishop is closing in, while Tony Abbott flounders.

Julie Bishop is the choice of Liberal voters to lead the Liberal Party, according to this week’s Essential poll, while Malcolm Turnbull is the overall choice of voters. Both hold big leads over the politically crippled incumbent, Tony Abbott.

Just 11% of voters believe the Prime Minister is the best leader of the Liberal Party, behind Turnbull (24%), Bishop (21%) and someone else (13%). But Bishop edges out Turnbull among Coalition voters, 26% to 24%. Bishop’s rise is a dramatic shift from June last year, when she barely featured at all in leadership calculations; while Tony Abbott’s Prime Ministership has collapsed into recrimination and debacle, Bishop has emerged as seriously competitive with Turnbull.

Social Services Minister Scott Morrison, much touted as a potential candidate for the leadership from the Right of the party, is barely above asterisk level, and behind even Joe Hockey, whose fortunes have evaporated in a series of gaffes and a disastrous 2014-15 budget. Turnbull is men’s pick for leader, while Bishop just edges him among women.

On voting intention, Labor remains on 41% while the Coalition has slipped to 38%; the Greens remain on 9% and the PUP has surged a point to 3%, for an unchanged 2PP outcome of 54%-46% in Labor’s favour.

As expected, there’s a crushing majority of disapproval for Tony Abbott’s decision to knight the husband of Britain’s Queen Elizabeth, the decision that ushered in the chaos that now surrounds him. Some 69% oppose the knighting of Prince Philip, while 14% approve of it, with even Liberal voters opposing it by a factor of more than two to one, 59% to 24%. Abbott’s entire knights and dames system is opposed 46% to 26%, with Liberal voters the only ones broadly in favour of it, 43% to 32%.

And in the space of two months, Tony Abbott’s attributes in the eyes of voters have deteriorated further, and significantly so, after falling over the course of 2014. Essential found that 72% of voters believe he is “out of touch with ordinary people”, up six points since December. Just 34% believe he is a capable leader, down nine points. A whopping 65% say he is arrogant, 63% “narrow-minded”, 60% “erratic”, all up since December. Just 27% believe he is trustworthy, down 3 points. Opposition Leader Bill Shorten, who has mostly marked time or drifted slightly lower on most attributes, leads Abbott on every positive attribute and trails him on every negative attribute, with the solitary exception of “more honest than most politicians”, where Abbott scores 30% and Shorten 29%. 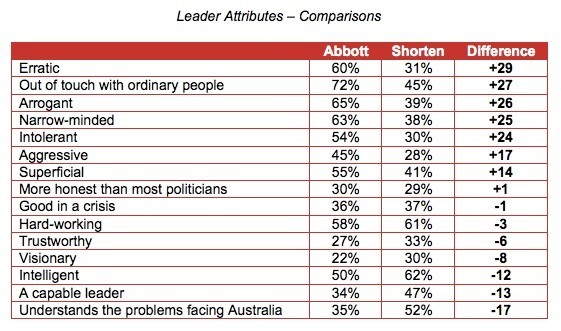 27% of people still find Tony Abbott trustworthy!? You know, if Essential was particularly unscrupulous, then they could make a fortune selling the contact details of these poor folk to Nigerian internet scammers.

Back room boys dump incumbent PM who won a decisive victory for a lady named Jules. No way that could happen!

“Get on down to Liberal Party Motors now and trade in your old Narcissus for a new second-hand one!”?

Bishop will be the fallback for the LNP’s masters if Abbott has to be dropped. They won’t want Turnbull, who is a Republican.

Yes, En Quiry, and I think that there are a couple of other reasons why Liberal voters prefer Bishop. Firstly, there’s probably quite a few of them who still have a Margaret Thatcher fixation, so being led by someone who seems to also share that fixation, would appeal to those folks. Secondly, I suspect there may be a fair few on that side of politics, who are looking forward to screaming the word misogyny, in a torrent of confected outrage, every time that she is justifiably criticised.