Political donations -- who's buying what? ... nudity in the Crikey bunker ... and visual effects in the can in Queensland ...

Donations watch. Today is kind of like Christmas for political journalists, with the release of political donations information from the Electoral Commission showing just what donations were received by political parties in 2013-14. While Bernard Keane has the rundown of which parties received the most and Stephen Mayne looks at which companies have spent up big for the federal Liberals, there are a few gems to be found in donations to the minor parties. The Palmer United Party received $28 million in donations in the 12-month period, and the short list of donors has one major thing in common — they are companies owned by Palmer himself (apart from the $101,833 donation made in his own name). Funnily enough, when we asked Palmer in mid-2013 if he would be donating to his eponymous party, he chastised us for being obsessed with money. A quick look at the donations to minor parties doesn’t have a lot of surprises, with the Liberal Democrats receiving $35,000 from tobacco giant Philip Morris and the Sex Party receiving hundreds of thousands of dollars from sex industry lobby group the Eros Association. The Electrical Trades Union donated $20,000 to the Socialist Alliance in the lead-up to the 2013 federal election. Also interesting are the donations from Chinese billionaire Chau Chak Wing, who donated $635,000 to the ALP and $200,000 to the Liberals. We’ll be combing through the disclosures for a while longer, let us know what you find.

The naked truth isn’t easy to face. At exactly 6.17pm on Saturday a significant portion of the Crikey bunker started to hope for the LNP to win the Queensland election. Why? It wasn’t because they suddenly developed a love for privatising assets or a hatred for bikies. It was this tweet:

At that point it seemed an unlikely possibility, but as the night wore on, Crikey staffers (and Keane, we presume) started to get a bit worried. Especially when we saw this: 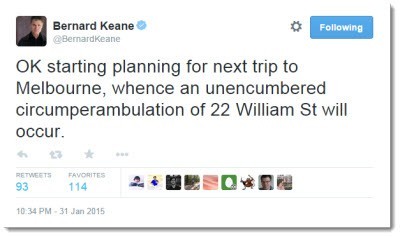 At this point Ms Tips is thinking that it’s probably unwise to bet either wine or nudity on election results.

Some certainty for TEQSA. On Friday we were tipped off about the uncertainty surrounding the brain drain at the Tertiary Education Quality and Standards Agency, the regulatory body responsible for ensuring the quality of higher education providers, with Chief Commissioner Nicholas Saunders in the role in an acting capacity since September last year and other roles left unfilled. On Friday afternoon Education Minister Christopher Pyne announced that Saunders would continue in the role in an ongoing part-time basis, with Linley Martin also announced as a part-time commissioner. The role of CEO is yet to be filled, but if the sector is deregulated soon, TEQSA may need one quick smart.

Higher education whispers. Independent MP Cathy McGowan is hosting a higher education forum in her local electorate today to canvas the opinions of locals on deregulation of the higher education sector ahead of the government’s push to get the legislation through the Senate before March. While McGowan’s vote won’t stop the legislation passing the lower house, we hear from a tipster that she has been spending a lot of time with Motoring Enthusiast Senator Ricky Muir lately discussing the reforms. McGowan has already expressed her concerns about how the reforms would affect regional unis, while Muir’s most recent position is that he “remains open” to deregulating fees. Can McGowan have more influence than the PM? We’ll have to wait and see.

Why march when you can scoot? Yesterday marked the 20th year of the Pride March in Melbourne, with Premier Dan Andrews leading the 140 groups in the march in an unusually cloudy St Kilda. As has been the case for a few years, all the major political parties were represented in the march, including strong representation from the ALP and the Greens. One tipster pointed out to Ms Tips that Greens senator Janet Rice wasn’t marching but scooting, with one of her legs in a moonboot. We hear that the adventurous Senator broke her ankle while bushwalking in Tasmania and that the scooter will be making an appearance when Parliament resumes this month.

Queensland election coverage. Throughout the Queensland election campaign we received many tips on who was likely to take over from Campbell Newman in the event that the premier lost his seat of Ashgrove and the LNP retained government. The standard LNP response throughout all the speculation was that they didn’t need to tell us about an alternate premier, because according to Newman, “My strong belief is the government and Ashgrove go together”. Turns out he was more correct than we thought at the time.

When it comes to the election night specials, we  saw that they really do things differently in Queensland, apart from at the ABC, where as we have come to expect, Antony Green’s high quality analysis was let down by dodgy touchscreen technology. Channel Seven, perhaps wary of such issues, decided to forego fancy visual effects by putting actual physical pictures of MPs that lost their seats in a woodchipper. We actually felt a little bad for Newman while watching this:

Channel Seven also pioneered “election taxi”, where MPs and candidates were ferried around in a taxi while answering questions.

7’s resident “expert” Patrick Condren looked more pissed at the Limited News Party, for making him look like a twat, by losing – he’d tipped them to win.

I notice “Independent MP Cathy McGowan is hosting a higher education forum in her local electorate today to canvas the opinions of locals on deregulation of the higher education sector.” I’d suggest first she might consider examining how some of the Government Funds provided for Universities are used.
1.Government moneys given to Universities up front when students enroll are kept by the universities even if students drop out.
2.Moneys given for students enrolling in a particular course aren’t always used for teaching that course.
3.Worse still, these moneys aren’t necessarily even used for teaching at all.

In practice, Government moneys can be used for:
1. Building high rise apartments for full-fee paying overseas students.
2. Issuing legal threats.
3. Bullying and buying the silence of Staff and Students who dare question the ways in which Government moneys earmarked for teaching are actually used.
If I’m wrong about any of this then I’m ready to apologise immediately — as soon as the Vice Chancellors state in writing that what I’ve suggested is happening is not happening in Australia.
This letter has been published, but so far no V.Cs have either risked responding or taking legal action to silence me.
Hopefully Crikey will take up this issue.

Re the election, I know it came as a surprise to the pundits, but like the generals of WWI, they are fighting yesterday’s war.

Politics have changed gents, and Labor winning the election was always a possibility given the polls and the knowledge that they us the preference flows of the previous poll, particularly inappropriate in this election.

As for Norman’s comments, there are some factual errors. First of all, there is a cut off date for students and if they drop out before the cut off date the university doesn’t get the money and the student doesn’t incur a HECS debt.

Secondly, yes, some of the money doesn’t go to teaching, blow me down. Some of it pays the staff who aren’t teachers, the general staff, who do all the behind the scenes work, some of it buys computers so that teachers don’t work in a 19th century environment, some of it pays electricity bills so that the students and teachers aren’t working in the dark and often enough in air-conditioned environments, where learning is so much more effective, and some of it buys paper for the printers and photocopiers. Yep, we’re not paperless yet.

Plus there’s the odd bit of research that gets done at universities.

And generally speaking student accommodation isn’t just about overseas students, a lot of regional students use it as well. Mostly these things are either a profitable venture or revenue neutral, so hardly represents a ‘cost’ to the university.

But it’s all very complicated. At heart, the assumption that student fees are to be used for teaching only purposes is erroneous.

Thanks, DogsBreakfast, for pointing out my sloppy posting on the Tips & Rumours thread. I regularly have typing difficulties here which don’t occur on other threads, but hopefully today will prove easier for me.
As you say, “there is a cut-off date for students and if they drop out before the cut-off date the university doesn’t get the money and the student doesn’t incur a HECS debt.”
The enormous amount received for students who haven’t dropped out at that time, but don’t complete the course is what the V.Cs don’t want known, and that’s why they remain so quiet.
Moneys universities receive specifically for teaching are used for other purposes, and in many cases only an extremely small proportion is used for teaching staff, resulting in poor learning situations. You may feel building a Five Star Hotel on Campus for rich students is a good use. I can’t agree.
You may feel having large crowds of students in supposed tutorials is a good use. I can’t agree.
You may even feel using the moneys to bully staff or students who questions what’s happening [including threats of legal action] would be a good thing. I wouldn’t agree.
Why not, instead of quibbling over a hastily typed slip, spend time checking on the more substantial issues I raised.
After that, you might even consider preparing a defence of the spending and forward it to the Australian V.Cs?