The LNP has had its collective arse handed to it, surprising just about everyone. What was the factor psephologists overlooked? 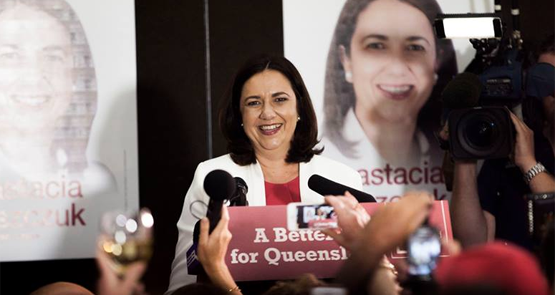 With the most likely outcome of Saturday’s Queensland election being the ejection of the Liberal National Party from office just one term after it swept to power in an unprecedented landslide, Queensland voters have delivered Australia’s biggest electoral surprise at least since regional Victoria blindsided Jeff Kennett in 1999.

Certainly it would never have entered anyone’s wildest imagination three years ago that Campbell Newman would join the thin ranks (though slightly thicker now) of leaders who met defeat after a single term in office. But even as late as Friday, it was possible to get odds of $6 on a Labor victory compared with $1.12 for the LNP.

Leaving aside matters of policy and philosophy that brought Labor within striking distance in the first place, two factors stand out in having tipped the government over the edge.

It was noted here on Friday that an unusually large number of voters were still unsure which way to jump. The most intuitively likely explanation for so many of them opting for Labor is that late opinion polls indicated that Newman’s defeat in his seat of Ashgrove was an all but accomplished fact. The message was delivered particularly forcefully on election day by The Courier-Mail, a curious irony given the paper had for so long provided the government with an ardently supportive voice in a one-newspaper town.

It can be said with good cause that the LNP’s likely defeat shows up the limitations of the boisterous campaigning so beloved of certain papers of the News Corporation stable (a compilation of recent Courier-Mail front pages having been a notably popular item among Labor supporters keen to indulge their schadenfreude on social media yesterday).

However, The Courier-Mail‘s front pages of the final week of the campaign told rather a different story to the one the LNP would have had pencilled in in advance.

Certainly Annastacia Palaszczuk was targeted with unflattering photos and headlines on Thursday and Friday, with her inability to nominate the rate of the GST having offered particular grist to the paper’s mill.

But for the two days previous, the paper’s sharp instinct for the political jugular was instead exercised against Tony Abbott, whose lunacy in relation to the Prince Philip knighthood offered manna from tabloid heaven.

However, the real damage was done by the “No Can Do” headline the paper ran on election day itself, trumpeting a devastating and, it transpired, accurate Galaxy poll from Ashgrove.

The realisation that the contest was between Labor and a headless LNP made a joke of the bunting voters encountered at polling booths advertising a choice between “certainty or chaos”.

Beyond merely promoting the LNP, the message advocated that voters use optional preferential voting to leave all other parties out of the equation, chaos being the thing that would ensue “if you number every square”.

Clearly the LNP well understood the threat it would face if the long-term trend away from allocating preferences going back to the 2001 election were reversed — and the other side of politics likewise recognised the opportunity, with the unions and GetUp spearheading a campaign to “put the LNP last”.

This brings us to the second element of the election’s surprise, namely the comprehensive defeat of the LNP in this aspect of the tactical battle.

Even as polling established that Newman’s goose was cooked in Ashgrove, the final statewide polls of the campaign appeared to endorse the consensus that it was simply too much to ask that Labor should return to power just one term after what happened in 2012.

With remarkable unanimity, Newspoll, Galaxy and ReachTEL all had results on election eve showing the LNP with a modest but decisive lead of 52-48 on two-party preferred.

This proved to be well off the mark, not because the pollsters had dropped the ball in their core competency of gauging the primary vote, but because they then projected two-party results based on from preference flows at the 2012 election.

Certainly it should not have come as a surprise that double-digit swings on the primary vote would be accompanied by more accommodating behaviour towards Labor from minor party and independent voters.

What wasn’t anticipated was a dramatic reversal in the trend of the just-vote-one rate, which went from the low 20s in the 1990s to 70% in 2012 — a phenomenon that has a legacy in an unusually high informal voting rate in Queensland at federal elections, where many mistakenly believe they can do the same thing.

As best as can be ascertained from incomplete data, the rate of non-major party votes dropping out of the count went from over half in 2012 to below 40%, a level not seen since 1998.

It’s no less clear that this was driven overwhelmingly by Greens voters, with a strong inverse relationship between electorates’ rates of exhausted preferences and their level of support for the Greens.

Since Greens voters who did allocate preferences behaved in their usual fashion by favouring Labor over the LNP by a rate of at least four-to-one, the share of the non-major party vote that passed on to Labor as preferences rocketed from 27% to 45%.

Meanwhile, the LNP’s share slumped from around 22% to 15% as Katter’s Australian Party faded from view, a weakly performing Palmer United Party failed to fill the void, and right-wing voters generally continued to allow their votes to exhaust.

The Greens continue to struggle to make their mark on Queensland politics, having a relatively weak electoral base and being locked out of Parliament by a majoritarian electoral system and the absence of an upper house.

But in driving the swing beyond the point anticipated by the polls and into change-of-government territory, it was the party’s supporters, as a good tabloid editor might put it, wot won it.

Its called “voting Labor through a Green rinse”. It sends a message to an incoming Labor Government not to forget about the environment.
Having thrown out the previous Labor Government, the voters of Queensland clearly wanted to return to normality. They preferred a down-to-earth, quiet and unassuming character to ‘strength’ and arrogance.

I thought the final straw was Campbell’s Australia Day press conference when he effectively answered all questions with versions of “Qld needs a strong team”. As a community we have limited opportunities to ask politicians questions. That means we rely on the media to ask questions for us. While I think the media often get it wrong, refusing all questions was a bad look. Reminded me too much of Joh’s “don’t you worry about that” approach.

The LNP goose was cooked a long way out with two by-election results giving a clear indication of what was on its way. They were simply too arrogant to appreciate the trouble they were in. Governments who fail to treat the electorate with respect should all be dealt with this way. In time they will learn.

Talking to people on the day and subsequently, I’m shocked at how many people have no idea how preferential voting works, yet alone how optional preferential works in Qld.