Ten's great hope launches to mass audiences, our love of sport (or medal ceremonies, anyway), and who did Alan Jones convince anyway? And other media tidbits of the day.

Now for the hard part. For months, the ailing Channel Ten’s been banking on the ratings success of imported reality series I’m A Celebrity … Get Me Out Of Here. And for once, Ten seems to have scored.

The program’s national and metro figures were solid — 1.646 million for the opening part of last night’s broadcast. There was a slight turn-off of 100,000 from the opening to the first episode, but that could be accounted for by the cricket and tennis starting on Nine and Seven respectively.

From tonight the program’s resilience will be tested when it comes up against The Block on Nine, which started last week, and the return of Seven’s mega-hit, My Kitchen Rules. Both could very well crush Celebrity. Ten might have been better starting it at 7pm and cutting The Project back to half an hour.

According to unconfirmed reports, Ten was offering to pay “celebrities” $60,000 a week for I’m a Celebrity … Get Me Out of Here. Shane Warne was approached, but he charges $100,000 a week for these sorts of gigs. That $60,000 figure suggests a $3.6 million talent bill for Ten (plus airfares, etc). Then there’s the staff costs for producers iTV and other costs. Industry gossip suggests this is costing Ten $15 million. That’s a big part of the network’s remaining cash pile, so it has to work. But in ratings terms, the first night should calm nervous executives at Ten and producers ITV.

The premiere should halt that other source of constant gossip, with the final cast revealed. Despite bizarre activity on Twitter that led media writers to speculate Sabrina star Melissa Joan Hart was a contestant (she followed hundreds of Australian accounts in recent weeks), she wasn’t one of the final 10. — Glenn Dyer and Myriam Robin

Musical chairs. After three years at the helm, the ABC’s high-profile 7.30 executive director Sally Neighbour has made the jump to 4 Corners, replacing Sue Spencer who announced her decision to step down in November last year. It’s not yet clear who’ll replace Neighbour at 7.30. Neighbour spent 12 years at 4 Corners where she won a swag of Walkleys, and is widely respected for having dragged 7.30 out of its post-Kerry-O’Brien-funk, axing the two-presenter model and grounding the program around host Leigh Sales.

ABC Head of Current Affairs Bruce Belsham paid tribute to Neighbour’s “reinvigoration” of 7.30 into “an agenda-setting must-watch.” “She will be a worthy inheritor of Sue’s outstanding tenure at Four Corners.” — Myriam Robin

Jones didn’t convince. At the start of his 2-week stint on 4BC (now indefinitely extended), we mused on what impact shock jock Alan Jones could have on the Queensland election. iSentia figures show that when it came to Queensland talkback, Jones wasn’t all that persuasive. “The intervention of Alan Jones into the campaign seems at worst to have had little impact, or even a slightly positive one for ousted premier Campbell Newman, with more callers criticising Jones ‘one-sided’ attacks than criticising Newman over the allegations”, iSentia’s briefing note on Friday stated. The Jones allegation were the single highest source of positive sentiment towards Newman in talkback calls. 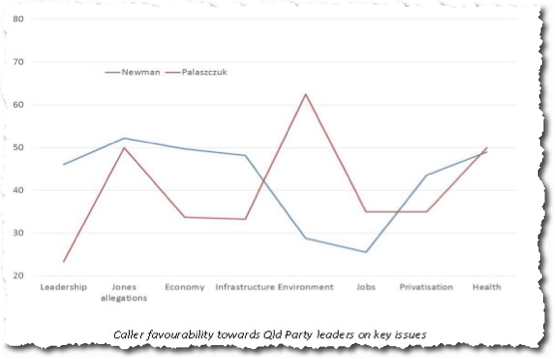 Speaking to Crikey after the shock LNP wipeout this morning, iSentia’s Patrick Baume said “on balance, it’s hard to discount what impact Jones had”. But Baume was struck by how many of the calls to 4BC and other stations were in support of Newman against Jones allegations. Many callers questioned, for example, why Jones wasn’t spending equal time grilling Labor on his program. In terms of Labor’s sentiment on talkback, there wasn’t much of it, but what there was wasn’t positive.

Social media was vehemently anti-LNP. “For possibly the first time, it was a more accurate guide to the election result than talkback,” Baume said. Talkback as a medium is generally conservative, but the sentiment does tend to shift with opinion polling. That didn’t happen to the same extent this time.

“I think these days, you have to look across a range of media sources to get an accurate picture [of voting intention],” Baume said. “If you looked at talkback and social media together, it clearly showed the Queensland government was in trouble.” — Myriam Robin

Nine’s underhanded coverage. The Nine Network showed some poor form in the 6 o’clock news in Sydney last night. First up they repurposed a part of the ABC’s Queensland election result from Saturday night, when federal Liberal backbencher Jane Prentice criticised the Prime Minister and said the leadership of the party and government was open to question. Nine recorded the sound bite and cropped it to push the ABC watermark out of view. Nine missed the story on its coverage on Saturday night, which again featured the juvenile boot graphic kicking out beaten Liberal National Party members.

And then later in the broadcast, in a story about a terrible accident in Sydney involving Seven Network personality and 2GB radio host Glenn Wheeler (who is battling for his life), the misery guts at Nine News dropped any reference to Wheeler’s work at Seven (and put a shot of him from The Morning Show with Seven and Morning Show watermarks cropped out). Nine News talked to another 2GB host, Jason Morrison, and mentioned Wheeler’s 2GB involvement in the story. Given the seriousness of the story and the fact there was no competitive issue with Seven involved, you’d think the Nine producers could have been more generous. — Glenn Dyer

Get sporty. It was a huge weekend for sport of all kinds, from soccer to cricket, tennis, NRL and even boxing, not to mention the blood sport du jour, politics. The final of the Asian Cup (Australia win), the men’s and women’s finals at the Australian Open tennis, the ODI final last night between Australia and England, the Queensland election and a couple of other smaller events attracted millions of viewers across the weekend — nearly 4 million people watched the men’s singles final on Seven and the second session of the ODI on Nine last night alone.

The ODI final in Perth yesterday and last night on Nine won by Australia averaged 1.42 million for England’s batting in the second session (Australia won early) and the Australian innings averaged 1.35 million.

I am afraid to say that a total of 162,000 people watched the return of boxing to national TV with the telecast on Nine’s digital channel Gem on Saturday night from 6pm. How unfortunate, some of the fighters looked like refugees from The Biggest Loser. And 347,000 watched the first Cadel Evans one day cycle race from Victoria on Seven. It was Evans’ last competitive ride. The NRL’s Nine’s competition had a top audience of 200,000 on Fox Sports yesterday afternoon. — Glenn Dyer

Bad news for Macquarie Radio. Usually the losses in a merger and clean-up come after the deal is done. But in something of a surprise, Macquarie Radio Network (MRN), which is in the midst of a planned $200 million merger with Fairfax Media’s radio business, revealed on Friday that it’s looking at a 50% drop in interim profit — with some of the blame going to the impact of preparing the company for the Fairfax deal.

MRN warned that based on unaudited accounts reported earnings before interest, tax, depreciation and amortisation (EBITDA) will have fallen 56% in the six months to December 2014 from the same period in 2013. That’s due to abnormal charges of around $2 million, with net reported profit to be down 65% after those one-off costs. MRN chairman Russell Tate said in a statement to the ASX:

“That cost increases in part reflected the company’s focus during the period on the facilitation of a merger proposal with Fairfax Radio Network.”

In the corresponding six months to December 2013, MRN reported a 14% fall in EBITDA to $6.4 million and a 16% drop in net profit to $3.8 million. It is scheduled to release its 2014 half-year results on February 18, with documentation for the merger to be issued for completion of the merger in late March. But it needs shareholder approval (no worries), as well as approval from the competition regulator, the Australian Competition and Consumer Commission and the media regulator, the Australian Communications and Media Authority. The merged company has already undertaken to sell AM Sydney music station 2CH and Macquarie Regional Radio if ACMA directs it to. If the deal goes through, as it looks like it will Fairfax will own 54.5% of the shares, with MRN holding the remainder. Fairfax also gets $18 million in cash. — Glenn Dyer

Forget the Big Mac. The Economist has this thing called the Big Mac index. With a global company like McDonalds, the thinking goes, it should cost more-or-less the same to make a Big Mac anywhere, so it’s a good measure of the relative value of currencies. Of course, that’s a few assumptions more than is reasonable, but it’s an interesting exercise nonetheless.

But here’s a product for which the relative cost of production across all countries is actually equal — the cost of a digital subscription to The Economist. Blogger Eric Crampton has converted the price of weekly subscriptions across a range of countries to US dollars, and it’s clear we’re a long way from the perfect transnational flow of goods. In Argentina, Brazil, Columbia, Costa Rica and Egypt, a subscription will set you back just $US1.94 per week. But in Australia, you can expect to cough up nearly $US5 a week. Of course The Economist is even expensive in print — and in our great southern land you get it half a week late! — Myriam Robin

Front page of the day. While we’re grumbling about it, this edition’s Economist cover is nice … 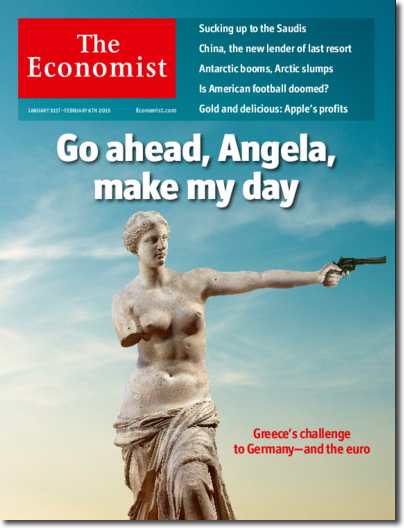