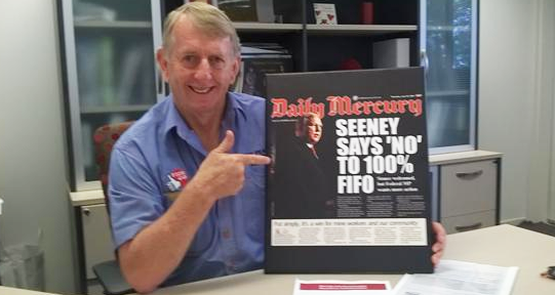 To get behind the real issues of the Queensland election, go beyond Ashgrove, where Kate Jones unseated Campbell Newman, to the coal, cane and cattle electorate of Mirani, where Labor candidate Jim Pearce defeated John Kerslake — and mining giant BHP.

The two electorates highlight the two different sectors in Queensland: the south-east urban corner and the regions. Both have candidates who focused on local communities and their issues against a strong leader seen as working for the big end of town.

The voters have turned strongly against “the elites”. This was picked up in ALP polling last year and was driven through Labor’s local campaigning — not just through the usual radio and local paper modes, but through social media in particular.

Kate Jones had 500 volunteers in Ashgrove, which proved more effective with voters than the big business-funded LNP’s $18 million war chest. She won not just on an anti-Newman campaign, but also a strong environmental campaign (the second or third biggest issue in many Brisbane electorates, which could prove troublesome for the  Labor government, which won a swag of seats in anti-greenie regions).

Jim Pearce won Mirani, a seat held by the LNP and previously the Country Party since 1950, defying the Goss and Beattie ALP popularity.

The former farmer and Vietnam veteran (and ALP member for a nearby abolished seat) took on the big miners, mainly BHP in the southern end of the Bowen Basin.

In the last week of the campaign BHP (locally known as BMA, for the BHP-Mitsubishi Alliance) announced it would reopen the Norwich Park coal mine, but workers would be fly-in, fly-out (FIFO) from Adelaide and Melbourne.

That was cream on the cake for Pearce, who over the last three years led the campaign against FIFO for an interesting coalition of unions and local small businesses.

The small business vote swung to Labor in the regions because of the devastation caused to their businesses by FIFO, and their expectation that the Newman asset sales/leases would also lead to reduced employment and purchases in their local communities.

And if they didn’t vote directly for Labor, the high Palmer United vote in the regions (16.6%  in Mirani) preferencing Labor did the job for them. Clive Palmer’s party didn’t win a seat, but he did get Labor half a dozen seats and unseat Newman’s government. Job well done!

The anti-big business/banker mood was palpable across Queensland.

The “no asset sales” campaign run by ALP — but just as strongly by Palmer and Katter’s Australian Party — was shorthand for a range of issues. But a summary of social media and party research showed up as  “when assets are sold, big business/bankers put prices up and cut local jobs”.

And voters also strongly commented that Newman’s big infrastructure binge was only a short-term fix, as the construction jobs it would have generated would be temporary — what would happen once the asset sale money ran out?

The dilemma for Annastacia Palaszczuk as premier will be to govern with a moderate debt but deficit budget, which requires big dividends from state business assets (ports, electricity, water utilities) while maintaining their job numbers and taking on the big miners over FIFO in a weak coal market.

The broadest smile on election night was that of former treasurer Wayne Swan, who actively worked on the campaign. It had all the trademarks of his “Soorley” win, when skating under the radar with a low-profile/few promises campaign he defeated high-profile Brisbane City Council lord mayor Sallyanne Atkinson. Although she was more popular than Campbell Newman, she too was perceived as arrogant and too close to the top end of town. The Soorley playbook won the election for Palaszczuk, thanks to Wayne Swan.

The real lesson from this election is that no matter how much influencing and donating the boardrooms and policy institutes do, the majority of votes are with those who feel pinged off, downtrodden and ignored.

Labor didn’t have to promise much in this election; the research showed the local community electorate had very low expectations. A distrust, in fact, of political spending programs.

But a huge distrust of board room wheeler dealers was the deciding factor.

*A fourth-generation Queenslander, Andrew Stewart has had IT, publishing and construction businesses based in Brisbane.

Campbell and the LNP received a Strong message from the community.

Good Article, It would be interesting to know how much the impact of social media and alternative news sources will change the way people vote in Rural and remote areas. The free market sell-the assets ideology of the Libs works out financially quite well for the lefty-inner-city-greeny types, the people who really pay are those in the Bush. I’ve often wondered why they just don’t seem to get that fact.

Good article however you forget Steve Bracks who outstared Kennet in a masterly manner.

Ah yes Salaryanne another in the long line of arrogant Libs.

And yes, I also think that in an oblique way, the massive funding advantage enjoyed by the LNP, actually helped in their demise. I suspect that this is because the feeling of invulnerability that it gave them, encouraged their already inflated expanded egos, to expand to an almost unprecedented level of political arrogance. This probably reached its peak when a piqued Campbell Newman decided that around 90% media support wasn’t enough for him and he refused to answer any questions that weren’t about his strong plan for Queensland’s future. Even the Courier-Mail gave a small amount of negative coverage to that one.
In contrast, Annastacia Palaszczuk’s campaign that included plenty of low key meet and greets, had her seeming genuinely engaged and affable. And when this was compared to the increasingly mercurial and vindictive Newman, I think many Queenslanders may have thought, ‘well, you’re probably not going to win, but good on you, hon, for having a go’.