Tony Abbott offered a crackdown on free speech and foreign investment, and pledges to be more consultative, in his crucial speech today. It's unlikely to be enough to save him. 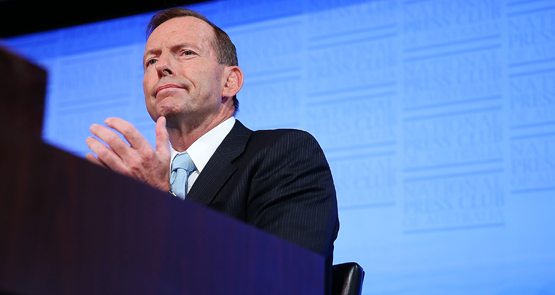 Tony Abbott has flagged further crackdowns on free speech and foreign investment, while confirming that his abandoned paid parental leave scheme will be transformed into some form of family assistance package in his make-or-break speech at the National Press Club this afternoon.

The speech, considered to be Abbott’s last chance to stave off moves to dump him from the Liberal leadership, strongly focused on blaming Julia Gillard and Kevin Rudd for the country’s woes and detailed his government’s achievements in stopping asylum seeker boats and removing the previous government’s carbon price.

But his much-anticipated program for 2015 centred on a remarkable switch to xenophobia, as he declared that, in addition to the mass surveillance scheme before Parliament, he was prepared to launch a crackdown on anyone expressing support for Islamic extremism:

“We have to tackle the people and the organisations that justify terrorism and act as its recruiting agents — such as Hizb-ut-Tahrir. We have already made it an offence to advocate terrorism and made it easier to ban terrorist organisations.  If cracking down on Hizb-ut-Tahrir and others who nurture extremism in our suburbs means further legislation, we will bring it on, and I will demand that the Labor Party call it for Australia. The police and the security agencies have told me that they need access to telecommunications data to deal with a range of crime, from child abuse to terrorism, and — as far as I am concerned — they should always have the laws, money and support they need to keep Australia safe.”

“And with the world still feeling the global financial crisis, people are anxious about our economic sovereignty. I am a friend of foreign investment, but it has to come on our terms and for our benefit. The government will shortly put in place better scrutiny and reporting of foreign purchases of agricultural land and better enforcement of the rules against foreign purchases of existing homes so that young people are not priced out of the market.”

The commitment to crack down on freedom of expression was all the more ironic after Abbott began his speech talking about his commitment to a free press in the wake of welcome news that Australian journalist Peter Greste had been released from jail in Egypt. And foreign and particularly Chinese investment has been a continuing issue of interest in the media, with perceptions in Sydney and Melbourne that Chinese buyers are depriving young Australian couples of an opportunity to buy a home, when data in fact shows foreign investment is responsible for much of the new home construction currently going on.

Also central to the government’s 2015 agenda will be “a way to improve the system of multiple payments, keep costs down, and put more money into parents’ pockets”, along the lines of the sort of family payments that the Gillard government boosted to attract votes and that were subsequently (and correctly) cut by the government in its budget last May. Abbott also flagged “a small-business and jobs package”. Clearly the “age of entitlement” is making a return, at least for voters in crucial electoral areas.

Abbott also repeated previous calls for an “honest national conversation between all of us with Australia’s best interests at heart” and said he wouldn’t be ruling anything out on the government’s coming white papers on federation and tax, although he then promptly did exactly that by indicating there would be no changes to the GST rate in the current term or the next term without full support from Labor at state and federal levels.

The Prime Minister further promised, both in his speech and in the subsequent Q&A with journalists, that he would become dramatically more consultative and collegial in his governing style, although as Seven journalist Mark Riley pointed out, Abbott has been making similar promises since he first became leader. But he acknowledged the error of both his PPL scheme and his knighting of Prince Philip, and revealed that henceforth selections for knights and dames would be made by the Council for the Order of Australia, not by himself.

In the end, there was little new in the speech beyond the appeals to xenophobia and the ditching of Abbott’s “signature” PPL scheme that had already been flagged — and for that matter, the PPL scheme had already been dramatically watered down and was still unlikely to be legislated in any event, making it an essentially symbolic move by the Prime Minister.

As to whether the speech will be enough to save him, Abbott’s performance in the Q&A with journalists was significantly better than in his delivered speech, but it is unlikely to rescue his prime ministership, at least in the medium term. There was no resetting of the political agenda, no broad unifying announcement, no compelling narrative, just assurances that this time Abbott really means it when he says he’ll consult more with his colleagues. Like the lines about stopping the boats and ditching the carbon price and the complaints about Julia Gillard and Kevin Rudd, Abbott’s colleagues, and everyone else, have heard all this before.

I suspect the only thing that will save Abbott’s position, is the fact that all of the serious contenders, recognise the job of PM in this Govt is a poisoned chalice.
So much right wing deadwood and so little actual talent.
Shorten must be praying for Abbott to hang on.
Today’s Press Club outing was a train wreck.

The Libs need a complete policy reset – away from ideology, tribalism, getting rid of anything Labor initiated and I can’tsee Abbott being able to do this.

Let’s see if Pyne reintroduces his privatisation of education bill.

PADDY: A train wreck indeed. My comment ““If the Liberal Party’s prime movers actually believe Tony Abbott’s speech, made today at the National Press Club, they will deserve every thing they get. The turning over to a committee of honours, no more ‘captain’s picks’ the fond belief in himself as the Messiah, The bucketing of the Opposition and the tired reiteration that things will be better. If Tony Abbott was even halfway sincere, why didn’t he do these things as soon as he got into power?

“They hate the cünt, and the more they saw of him the more they hated him,” should reveal the feelings of the electorate for Tony Abbott.”

We’ve heard it all before, and, no doubt we’ll hear it all again. And, do we believe any of it ???