Al Jazeera is playing nice with the regime these days. Is the Marriot cell now old news in Egypt? 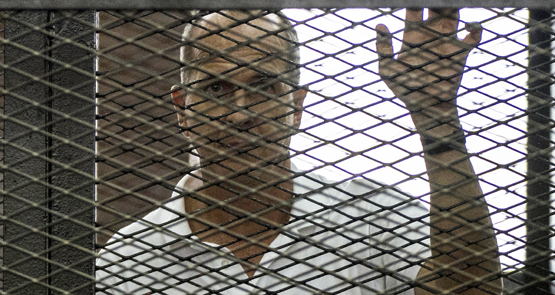 After 400 days in Egypt’s most notorious prison, Australian journalist Peter Greste was finally bundled onto a plane to Cyprus this morning, to the relief of his family and friends.

Sentenced to seven years to ludicrous charges of defaming Egypt and aiding the Muslim Brotherhood in June, Greste and his colleagues, dubbed by the local press as the Marriott cell (after the hotel they were arrested in), had their guilty status changed recently when an appeals judge on New Year’s Day ordered the case be retried. This meant Greste and Cairo bureau chief Mohamed Fahmy could be deported under a November presidential decree that allowed the deportation of foreigners accused of crimes in Egypt. Egyptian President Abdel Fattah al-Sisi used this decree yesterday to deport Greste. The deportation allows Sisi to pragmatically neutralise at least part of what had been a constant source of lobbying by Western governments.

It’s the middle of the night in Egypt, and it’s yet to be seen whether members of the government or Egypt’s commentariat will more formally address the Marriott cell case in the morning. But the issue has received minimal mention in Egypt’s Arabic press this morning, while the English-language Egyptian press has mostly run wire copy on Greste’s release.

Staying behind in Egypt are Greste’s colleagues Canadian-Egyptian Fahmy and Egyptian national Baher Mohamed. Reports this morning suggest Fahmy’s release will shortly follow. For Mohamed, there is no prospect of deportation. His employer Al Jazeera, along no doubt with Greste and Fahmy, will be keen to ensure interest in the case does not drop off once its two most high-profile victims are safely with their families. But maybe Al Jazeera can be optimistic. While Egypt’s imprisonment of journalists hasn’t slowed down in recent months, its relationship with Al Jazeera has improved.

Following the popular rebellion that led to the military retaking power in Egypt, the Qatari Al Jazeera adopted an editorial stance that many viewed as being overly sympathetic to the deposed Muslim Brotherhood, particularly in its Arabic channels (Greste worked for Al Jazeera English). When Egyptian authorities violently cracked down on the political party and its supporters, Al Jazeera’s Arabic-language Egyptian channel Mubasher Misr devoted hours per day of heart-wrenching interviews with families of the victims. It also referred to the overthrow of the Brotherhood as a “coup”, a description many if not most Egyptians object to (they prefer references to a “revolution”).

But relations have thawed in recent months. In December, Al Jazeera closed down the biggest stumbling block in relationship, Mubasher Misr, shortly after Sisi finally met with representatives of the Qatari government at Saudi Arabia’s behest. The kingdom has been pushing an Egyptian/Qatari reconciliation plan. Some observers, including  Mubasher Misr’s journalists, have described the closure of the channel as a sign the Qatari government refused to be cowed into toeing the Egyptian government’s line. But the practical effect is the same.

With the closure of  Mubasher Misr, a key source of criticism of the regime has gone, and the few local opposition journalists and political activists are increasingly isolated. There are at least a dozen journalists currently imprisoned in Egypt, according to the American Committee to Protect Journalists, and up to 40,000 political prisoners (the regime acknowledges only 16,000). But Greste and his colleagues were arrested as public anger over the Al Jazeera coverage was at its height. It has now subsided, overwhelmed by economic and regional concerns as Egypt rebuilds during a period of relative political calm. Releasing Al Jazeera’s journalists is now easier — and removes a thorn from Sisi’s side.

So the US has allowed its Egyptian puppet government to allow the release of a Qatari employed journo…big deal.

There remains around 200 jailed journos in Egypt..all incarcerated cos they dare to question the right of a foreign power to control their society.

Watching Bishop today act out the fantasy that Australia had something to do with the journo’s release, is as pewk-inducing as seeing Abbott recently shake the hand of the evil despot that runs Saudi Arabia – yet another US stooge.

These two fiasco’s are emblematic of the sad reality of Australia’s asinine boast of being a ‘middle power’……more a junior burger power for mine, operating under the slogan of ” do you want lies with that?”.

I suppose he’s going to be dripping with politicians soon?

The US was the force behind the army take-over and alSisi knows which side his military toys are buttered.
Even Israel was happy with the coup so all is right with the world. QED

Will the third journalist be offered citizenship by another country, for example, Australia?