Yingluck is right, democracy is dead in Thailand

The military junta that controls Thailand is looking every inch a dictatorship. 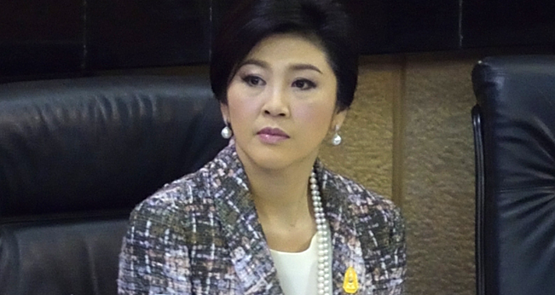 The world that the military junta in Thailand is creating for its countrymen is an increasingly fragile place after the country’s appointed rubber-stamp parliament, the National Legislative Assembly, last week impeached former prime minister Yingluck Shinawatra, whom military generals tossed out of office last year; she could now face 10 years in jail.

In response, she declared that democracy in Thailand was dead. She was right.

On Monday, Daniel Russel, the United States Assistant Secretary of State for East Asian and Pacific Affairs, and the most senior US official to visit Thailand since the coup, raised concerns about the situation in the country, suggesting that the move against Shinawatra could be politically motivated and saying that martial law should be lifted.

Now the NLA’s foreign affairs committee has summoned the US envoy in Bangkok to participate in “some talk and explanation about what happened”.

All of this places Australia in an invidious position. After being singled out by the junta, alongside the US, for its strong stance against the coup — which included the cancelling of military exercises and banning coup leaders from travelling to Australia — the Abbott government has been working hard behind the scenes to make nice with the junta in an effort to normalise relations.

But the fresh stoush with the US has thrown a spanner in the works. To add to the Australian government’s problems has been the arrest of Phuket-based Australian journalist Alan Morison, who faces politically motivated charges of criminal defamation and computer crime in July that could land him in jail for seven years. Then there’s the forced closure of Thailand’s largest gold mine, run by Australian-listed company Kingsgate, on suspicions that it is poisoning local villagers. The company strenuously denies those claims, which might be politically and commercially motivated.

Thailand is an important country for Australia. In 2013, it was our sixth-largest trading partner (after China, Japan, the US, South Korea and Singapore). It is one of the country’s favourite holiday spots — in 2013, close to 1 million Australians visited Thailand. That figure was likely down a little last year as tourist numbers across the board to Thailand dipped by 7% — a sharp turnaround from the annual growth of 20% seen in 2013 — hit by a combination of the street protests, the coup and the resilience of the Thai currency against pretty much every other except the US dollar, which it has closely tracked. As well, there are tens of thousands of Australians who live, work or have retired in Thailand, using the country’s attractive retirement option available to most comers over 50. The Australian consulate in Thailand is the biggest in the world due to the huge number of visitors and residents.

Thailand is also the second-largest economy in the Association of Southeast Asian Nations, which will belatedly launch its economic community at the end of this year. While no one is really expecting much from this initially, it’s a landmark symbolic move. Thailand has been putting itself forward as the regional small and medium business hub, leaving Singapore to play the role for larger corporations, as well as a secondary regional headquarters for companies based in Singapore and Hong Kong. But international investors remaining very wary of military governments in general and there remains plenty of uncertainty about where the generals are taking Thailand. The business community in Bangkok has been particularly spooked by early nationalistic moves, now mostly hosed down, to amend the Foreign Business Act.

In the eight months since the chief of Thailand’s army General Prayuth Chan-ocha seized power on May 22, installing himself as Prime Minister, he has been trying to stamp out Shinawatra support, for both Yingluck and her brother, exiled former prime minister Thaksin Shinawatra. Prayuth has been removing Thaksin’s supporters and the support base of the former PM, himself the victim of the military coup in 2006, who has been pulling the strings of power from afar.

In his biggest move so far, Prayuth is overhauling the entire structure the Royal Thai Police, widely seen as a support base — and possibly even a militia — for Thaksin, himself a former policeman.

As if all these self-created problems were not enough, economically things are not going so well for the junta. Official figures for economic growth in 2014 will be released next month, but is expected to be less than 1%. Exports, the country’s biggest economic driver, continue to underperform, with the ongoing uncertainty crimping domestic investment and consumption.

Even Russia has called for the junta to lift martial law, which has remained in place since the coup, despite no signs whatsoever that anyone wants to challenge the military beyond a few desultory student protests.

“Each country has its own practices and we have our own way to deal with problems we face. I insist that we have to maintain martial law to keep everything in order,” Prayuth said, sounding every inch the dictator, rather than the democrat he professes to be.

As well as martial law, the junta has been highly censorious of the media, especially the local press. It has blocked thousands of websites, and NGOs have regularly had to cancel talks about media freedom.

Yet the military has so far failed to address the root problems in Thailand of massive income inequality and limited social mobility underpinned by a deteriorating education system and a lack of any real independent institutions.

The junta is seeking a way to keep Thaksin and his supporters, which in five successive national elections have proven to be the majority of Thais, out of power. Any move to jail Yingluck runs the risk of creating a martyr, so the junta must tread carefully. But for now, Prayuth and his team are simply kicking the can down the road for an eventual moment of national reckoning that is increasingly looking like it won’t end well.

Re your last paragraph, I wonder how the families of those farmers who committed suicide feel about the Shinawatra rice scheme? It was nothing more than grab for the vote of the Isaan dwellers. The fact that it was completely rorted by the Shinawatra trough snorters meant it was time to rid the nation of this scourge. The shakeout of the Police has only just begun.

Thaksin was that good for the country …?

Klewso: Compared to the current military dictatorship…He really wasn’t all that bad. Corrupt, yes, but the military are no better.
Meanwhile, Shinluck made some fairly sad stuffups like the rice scheme, but replacing a popularly elected leader with yet another military coup is a pretty sad state of affairs.

But the real “white elephant” in the room, is what happens when the king dies. I fear it won’t be pretty.

klewso
Thaksin introduced a universal healthcare scheme similar to Medicare (with a small co-payment) which among other things made him very popular with the Red Shirts the current Junta has close ties with and is supported by what is the equal of Australia’s LNP the Yellow Shirts.
Tony Abbott’s tantrum when he lost to Julia Gillard was nothing compared to what the Yellow Shirts are capable off if they don’t win they just oust the popular Government and go to election again.
This time around after calling for an election Yingluck gave them what they wanted and she was re-elected hence a coup
paddy
Re Rama IX that is something many expats fear including myself to the point of staying in Australia until both democracy returns and the chaos that will surely follow the passing of HRH

Michael Sainsbury says the forced closure of Kingsgate’s silver and Gold mine in Thailand over concerns about poisoning the local villagers “might be politically and commercially motivated”. Well it might, but the company has been able to produce no baseline studies of the health of villagers or the environment and its only response has been to insist it doesn’t “use” the harmful substances involved. This of course is irrelevant if mining has released those substances into the surrounding area. Rather than a scientific response the company has instigated legal action against the Thai government. What, it should be allowed to continue without showing it isn’t poisoning locals? It has also been investigated by ASIC over bribery allegations in relation to this mine. This is the same company that wants to mine lead near Mudgee less than 1.5 kilometres from a village and primary school. without baseline health data.