Mass sacking at South Australian DPC ... another name to replace Newman ... and what the trees think of the PM ...

A massacre in the dark. Head honchos at the South Australian Department of Premier and Cabinet were shocked yesterday when 11 directors and executive directors were summarily shown the door, some without time to clean out their desks or say goodbye to their colleagues. An internal email to staff from new chief executive Kym Winter-Dewhirst told mandarins:

“Reform will be continuous, firstly to bed down the new structures, but also to improve processes, procedures, attitudes and work practices. Over the coming days, meetings throughout the department will be scheduled to further discuss the changes and the Department’s future priorities … As you would appreciate, these changes have a direct impact on several existing executives, some of whom are departing DPC.  I would like to thank those who are leaving for their service and contributions to this agency. All of the changes are effective immediately and implementing them quickly and in accordance with employment obligations will ensure the momentum of reform continues.”

An insider in the department has told Crikey staff at the department think the terminations were handled cruelly, with one director having his work phone confiscated immediately and company car returned within hours. His staff cleaned out his personal items from his desk. Some other directors were, at least, given the courtesy of leaving behind clean offices. Crikey is told the four of the executive directors no longer required had professional links to the outgoing chief executive, James Hallion (who has remained with the state government in a part-time capacity in another role).

“Few will shed tears for the sacking of senior public servants who earn six figures, but what happened was a massacre in the dark,” an insider told us. “A new chief executive is obliged to flex their muscles to show they mean business, and that need is heightened when you’ve come from the private sector into a public service organisation which is regularly lambasted as staid and wasteful. But is there a need, in amongst this carnage, to act with such callousness? Should the new chief’s much-touted mandate stretch far enough to decline a request to take a moment to farewell your staff one by one?”

No redundancies are expected in the lower ranks. But the grunts aren’t happy about this.

Training regulator trouble. We hear grumblings at the Tertiary Education Quality and Standards Agency, the regulatory body responsible for ensuring the quality of the higher education system:

“Today TEQSA lost a commissioner, the second executive director responsible for core regulation functions (the other one went months ago) and a head of Communications. At the end of January, the Chief Commissioner’s temporary appointment will end with no announcement on a replacement. A new CEO won’t be appointed for some weeks or months. If the reforms get through, who’s going to ensure the proposed 80,000 new students doing advance diploma/associate degrees get what they pay for? TEQSA can’t, it doesn’t have the staff. “

According to our tipster, this is just the tip of the iceberg, as has the agency has lost a significant number of staff in recent times. We asked TEQSA whether key staff had finished up yesterday and received this response:

“That’s right, Commissioner Michael Wells is moving to Phillips KPA (announced a couple of weeks ago) and the Director of Communications and International is working in consultancy. They both leave with our best wishes and will be very much missed. Until recently, the roles of the Chief Commissioner and Chief Executive Officer were combined — these roles were split after amendments to the TEQSA Act late last year. The Department of Education and Training is recruiting for the Chief Executive Officer role and Professor Nick Saunders continues as Acting Chief Commissioner and CEO until the end of February. The TEQSA Act Amendments mean that Commission decisions require a quorum of two, so our regulatory business is unaffected.”

TEQSA told us that the future of the chief commissioner role will be decided by the Department of Education.

The only one who agrees with Abbott. This from a tipster who thinks we shouldn’t be looking in Credlin’s direction:

“Whose hand was behind the prime minister’s decision to award a knighthood to Prince Phillip? Someone close to Buckingham Palace — physically — with close family ties to the royals? Someone with a plummy voice and impeccable Liberal Party credentials? Someone whose first name is Alexander?”

The final countdown. In less than 24 hours polls will open in Queensland, and this is our last edition of Queensland campaign gossip before votes are cast. While academics are saying that Campbell Newman could stay on as premier in the event that the LNP wins and he loses his seat, we have heard another name bandied about to lead the LNP. Although we have previously been told Health Minister Lawrence Springborg could get the gig, one tipster reckons Deputy Premier Jeff Seeney will be “annointed” by the party leadership. We put that to Seeney’s office and didn’t hear back by deadline

We’ve already reported that the LNP is warning Queenslanders against voting for the minor parties to forestall “chaos”. It seems that letters from every single candidate features the message and even residents living in electorates where the minor parties aren’t running are getting such warnings. A tipster also snapped this photo of a protest at Brisbane’s Kangaroo Point Cliffs this morning. We’re not sure why they’re in pink, but it makes a nice visual: 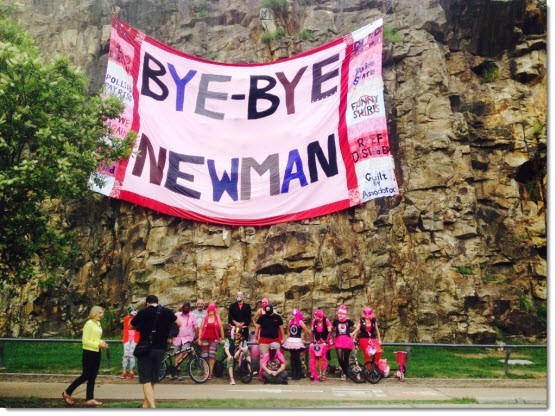 Listening to Mother Nature. While we have never really wondered what the trees are thinking, the powers that be at Melbourne City Council have decided to make it possible to email trees of the city as part of its urban forest map. Residents can also receive replies penned by various council staff. Of course the trees don’t write on paper — that would be rubbing salt in the wound. While some have received love letters, Ms Tips decided to email one of the trees that sits outside the Crikey bunker with one of the most pertinent political questions of the day:

“Do you think Tony Abbott will still be Prime Minister in six months?”

The answer came as follows:

“You’ll have to visit me and listen to the rustle of my leaves to understand which way the wind is blowing.

We’ll keep you updated on the news from the trees and from grumbling MPs as we hear it.

Setting the record straight. The art world is today mourning the death of Sydney painter and sculptor Colin Lanceley, who died this morning at his studio/home in Surry Hills, aged 77. We hear this from a tipster, who is making sure he is remembered properly:

“Lanceley was visited recently by an arts critic who had compiled a monograph. He showed Lanceley a copy of his draft and invited his comments. When he faltered after reading a couple of pages, his wife Kay took the manuscript and began her own edit. Suddenly she gave a startled cry: ‘What’s this rubbish about Colin being a lifelong Fabian socialist? He was never one of those armchair Fabian tossers. He was a socialist. This will have to be changed.’ It was.”

Literati and schadenfreude. The Victorian Premier’s Literary Awards kicked off in the gardens of Parliament House on a balmy Wednesday evening, and the air was thick with the scent of expensive perfume mingled with not-so-subtle notes of schadenfreude.  Enter newly minted Minister for Creative Industries Martin Foley and the Premier himself, Dan Andrews, who could barely contain their glee as they mined the rich vein of comedic potential that was the PM’s Prince Philip knighthood announced over the weekend. Overly politicising these types of events isn’t really the delicate thing to do, but Foley’s speechwriter had gone to town, with the minister referencing the decision repeatedly in his speech, citing the ridiculous appointment as a sign of how out of touch the government’s vision of Australia was. Andrews took the higher ground. As he himself acknowledged, he was tempted to go there, but given his position now, he had to be above poking fun at such things (while grinning widely.) After that, it was left up to winning playwright Angus Cerini to play to a very receptive crowd by delighting in what a great land it was when he could stand up without fear and call the leader of our nation “a dickhead”. “I mean, how good is it?” he marvelled to the appreciative crowd. “He can’t even  fail at failing.” Evidently Foley appreciated the quip: 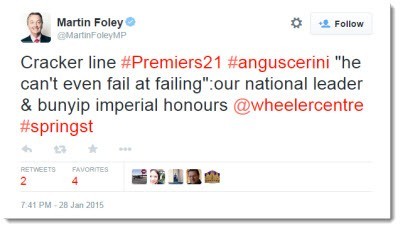