Reserve Bank goes back to the bad old days

The Reserve Bank appears once again to be playing favourites by breaching its own communications policy on the direction of monetary policy, Glenn Dyer and Bernard Keane write. 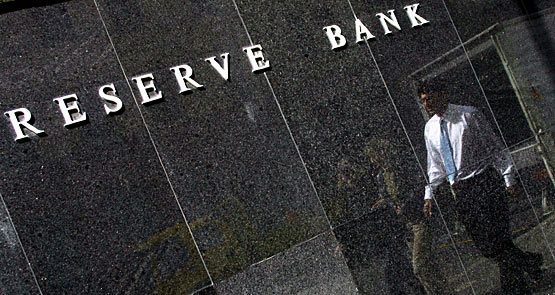 Once again, hard questions have to be asked about the Reserve Bank’s communications strategy, after the Australian dollar fell sharply overnight, taking its losses in the past 40 hours or so to US3 cents as the market reacted to suggestions of an interest cut next Tuesday.

The Aussie dollar traded to a high of US80.27 cents on Wednesday night in the wake of the December-quarter inflation figures (and the suggestion underlying inflation, which the Bank focuses on, remained stronger than expected) but this morning is down almost 3 cents at 0.7740. It traded a low of 77.17/20 early this morning, the lowest level the currency has been against the US dollar since July, 2009. The currency was trading around 77.65 at 8am today.

The change of heart came around 9-10pm on Wednesday night when market rumours of an article in the Herald Sun in Melbourne by Terry McCrann, started circulating. When traders managed to get hold of the piece, they found the lead paragraph in his column declared the RBA “will almost certainly cut its rate at its first meeting back for next Tuesday”.

That revived memories of past scoops by McCrann about RBA rate moves, which got so common that other media commentators and groups complained and forced the RBA to introduce a media blackout period starting the Wednesday before the monthly RBA board meeting on the first Tuesday of the month. The bank, it was perceived, had breached its own blackout to brief McCrann in the wake of the slightly stronger December quarter CPI figures had seen the dollar rise past 80 US cents and market pricing rule out a rate cut.

This morning The Australian Financial Review tried to clamber on the rate-cut bandwagon by claiming, “The Australian Financial Review also reported the chance of an interest rate cut, potentially as early as next week, had increased following the inflation data, which indicated soft domestic demand”. Well, the soft domestic demand has been apparent for the past year or more, and the RBA has been mentioning that in post-meeting statements and in the various speeches and publications from the bank. There was no “new news” in the data to warrant a rate cut.

But Barclays’ chief economist Kieran Davies made the perfectly valid point yesterday when he said the “episode raises some important questions for the RBA” about its communications policy.

The Bank communicates frequently and clearly with the markets. Take 2014, which was typical for the bank. There were the 11 post-meeting statements and 11 sets of meeting minutes, four statements on monetary policy and two reports on financial stability. Governor Glenn Stevens makes two appearances a year before the House of Representatives economics committee. Senior RBA officials from Stevens down to senior heads of departments (such as Financial Stability and Economics), made a total of 46 speeches and other public appearances, most of which saw questions on interest rates and key issues like the dollar. In total, that’s over 70 communications to the markets, in addition to more than 20 research papers and RBA bulletins.

Stevens hasn’t been averse to using the media as well. For the past two years, he has given a major interview in mid-December with the AFR. In December, he nominated US75 cents as the ideal level for the currency (while noting that the fall is much smaller on a trade weighed index. That remains the case today with the currency very strong against the weakening euro and yen). But those interviews were done outside the blackout period.

So what happens next week? Cutting interest rates will confirm in the minds of many in the markets that the bank has shown partiality to one media writer, drawing an unwelcome level of hostility and scepticism which will linger. But if it doesn’t cut, then McCrann will be stranded and look like a goose, and likely bring the wrath of News Corp down on the bank.

Possibly the final paragraphs of the meeting statement will be adjusted. In December, Stevens said:

“In the Board’s judgement, monetary policy is appropriately configured to foster sustainable growth in demand and inflation outcomes consistent with the target. On present indications, the most prudent course is likely to be a period of stability in interest rates.”

The final sentence could be easily changed to remove the reference to “a period of stability in interest rates”, or change the phrase “on present indications”.

But the Bank wouldn’t be in this position if it hadn’t decided to return to the discredited tradition of playing favourites.

Ask the economists: how do you talk down the dollar?

As the mining dries up he government is hoping that agriculture will take the shortfall and a low AUD will help that. However we are a net importing country and with a low AUD inflation will increase, it will be cheaper for overseas countries to buy our assets and our country. It also means that the government debt will increase. That is the trade off. Perhaps it will encourage businesses to set up in Oz but it is more likely these businesses will be foreign owned.