What is it with The Guardian telling us what to do? And other media tidbits of the day.

Grauniad watch. Cognitive behavioural therapy has it that the pathway to good mental health is to minimise the number of “musts” we impose on ourselves. “I must not kill people” is a good one to keep; “I must be thin, successful, in love and have a No.1 album” are the sort of things it’s good to ditch.

Given that, what can we learn from the “tyranny of the musts” about The Guardian? Famously, the paper gets more annoying as you get older, due to its unceasing moral invocations, but it’s starting to get ridiculous. Here’s the heads and decks from one day’s comment pages:

Owen Jones: “We must stop Angela Merkel’s bullying — or let the forces of austerity win”

Simon Jenkins: “Where are the Real Tories? We need a party to halt the advance of the state”

Suzanne Moore: “Forget the Greens — if the UK wants a truly left-wing party, it might have to grow its own”

Monique Wilson: “Critics of the Vagina Monologues must acknowledge its transformative powers”

Katie Price is the former model Jordan who has earnt, and apparently spent, millions. Doubtless, she deserves access to universal welfare provisions, but by my calculation, today, we already have to defeat German power in the EU, start two new political parties and praise the Vagina Monologues. That’s the UK page. I haven’t even looked at Australia’s, for fear that the Holocaust Memorial Day edition will have an article entitled “Don’t fat-shame Hermann Goering”.

Seriously, we all do too much of this, but this is crippling neurosis raised to an editorial principle. A bit more analysis and opinion would do the trick. Facts are sacred, comment is free, and exhortations aren’t worth the paper they’re not printed on. — Guy Rundle

Seriously? We know obituaries are written far in advance, but was this one written in Regency England? The Australian today (page 9) on the death of Australian author Colleen McCullough … 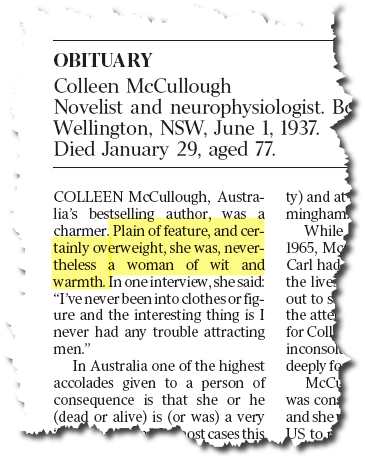 Who could have written it? The obituary carried no byline, and the insiders we asked were clueless. We’ve put the question to the Oz.

The final verdict. The Courier-Mail passes on Palaszczuk (note their little comment on the level of GST next to the price). 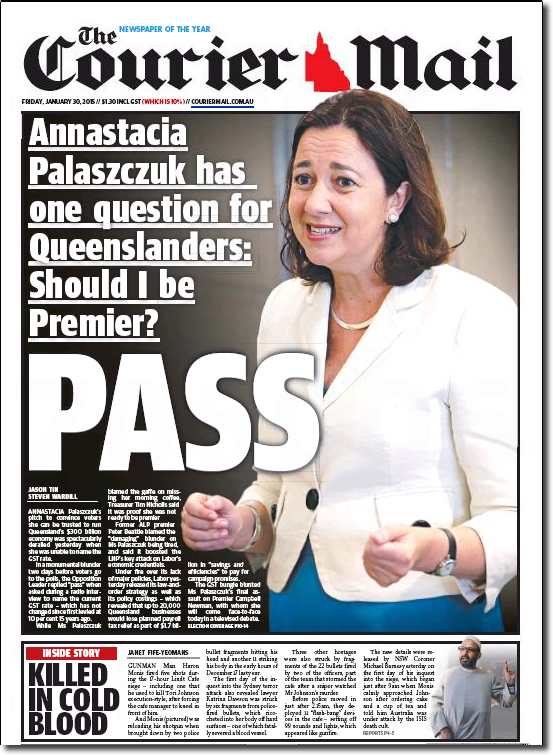 And the Gold Coast Bulletin gets creative … 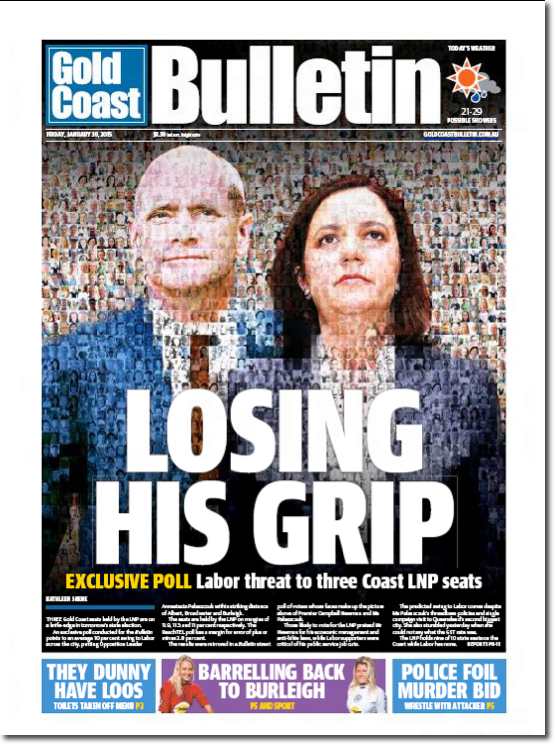 Video is the content king. Online video is casting a spell over more and more companies in the digital space with websites Mashable and Business Insider revealing overnight they have attracted a new round of funding from venture capitalists that they say will help finance their expansion deeper into video. Mashable will receive US$17 million in a funding round led by Time Warner Investments, the investment arm of Time Warner Inc. Business Insider will receive US$25 million from a group of investors led by a unit of German media conglomerate Axel Springer SE, and Amazon founder Jeff Bezos (who also owns The Washington Post).

Downton actors jump ship. Doubt is growing over the future of Downton Abbey. Last week we pointed out that Julian Fellowes, the writer of the series, was being wooed by NBC to write its new costume drama, The Gilded Age. Downton Abbey is made and distributed by a subsidiary of NBC. As well, PBS executives were uncertain about series seven when talking to American entertainment media on the recent Winter TV tour.

Overnight, more stories emerged in the US media about how some cast members were reportedly talking to film and TV producers in the US. While that has happened in the past as actors fill in the downtime from Downton Abbey with other work, the UK reports are suggesting these moves are an acknowledgement by the stars that the high rating historical drama won’t proceed to a seventh series.

Fellowes is currently writing series six, which will go into production in the near future for broadcast on ITV in the UK in the northern Autumn, in the US on PBS next January, and the Seven Network here in 2016. Series five is airing on PBS at the moment, aired in the UK late last year and is about to start on Seven next month.

Downton’s ratings have slipped a little in the UK and fallen sharply on Seven. The premiere of the fifth series of Downton Abbey was watched by 8.4 million Brits in September — the lowest debut since the show’s launch in 2010. Ratings peaked at 10.8 million viewers in early November. The Guardian points out there’s plenty of time for a change of mind — ITV usually completes negotiations and commissions by November each year. But ratings here on Seven have fallen noticeably, to the point where the program was attracting less than a million viewers in metro markets last year. — Glenn Dyer

Front page of the day. Newsweek’s cover is being called sexist in some quarters, but we can’t help thinking that’s exactly the point … 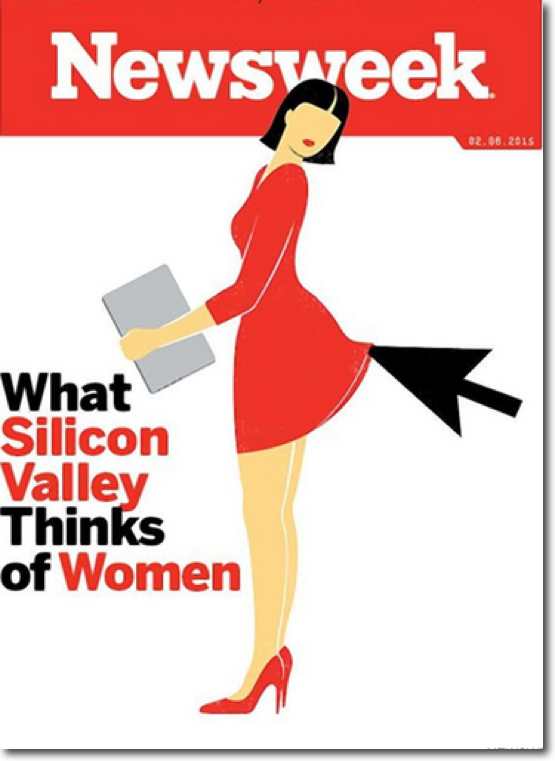 That Colleen McCullough obit is a disgrace. The Oz should apologise for such sexist rubbish. As for Downtown Abbey, its simply a soap in costume, who would miss it?

Obviously those in charge of – what amounts virtually to, our state’s one viewspaper (and thus hard-copy news/information) – the Curry or Maul – have never been preoccupied, and had a blank moment ….. except when it’s come to editing/reporting what it thinks “isn’t in the public interest” (ie much if any detail of Limited News Party cock-ups)?
What a use of elite power?
[As pimps, having abandoned any neutrality to tout their Limited News Party, again, now they’re joined at the lip to Newman’s future governance again.]
Also looked like a get square for the fun had at Murdoch’s Toady’s expense, the daze before, by the “hoi polloi” – that normally vote Left?

Every now and then there’ll be something worth while, but these days I only read the Guardian’s opinion pieces to have a good, self righteous sneer. Their own goal over The Sun’s page 3 was a delicious sticky date and schadenfreude pudding in a rich, caramel sauce.