Yoav Hattab, a 21-year-old Tunisian Jew, was murdered in a kosher supermarket on the day of the Charlie Hebdo massacre. Eyewitness accounts show that he died a hero, trying to protect his fellow hostages, writes freelance journalist Ken Haley. 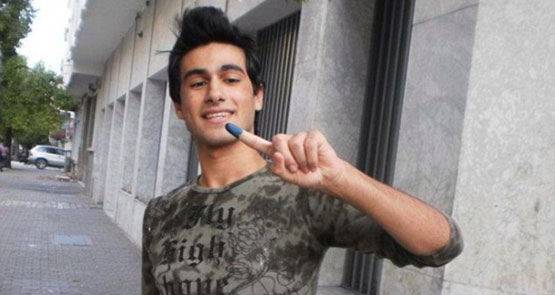 Earlier this week, Malian immigrant Lassana Bathily, who worked at the Paris kosher supermarket targeted by terrorists on the day of the Charlie Hebdo massacre — and saved many lives by ushering customers into a storage room — received a medal for his heroic actions along with French citizenship. Because of Bathily’s quick thinking, many people were able to go home to their families that day.

Another hero in the supermarket that day, Yoav Hattab, received a posthumous Legion of Honor for his actions. In the photo above, he shows off his ink-dyed index finger to show he has voted in his home country of Tunisia’s first democratic election since it ignited the Arab Spring in 2010 and demonstrates the pride he feels in being part of its history on this day, October 26, 2014.

Yoav Hattab was a Jew, raised on the island of Djerba, where his father superintended the synagogue for a population that could trace its presence there back two-and-a-half thousand years,  and who was chief rabbi to the nation’s 2000 remaining Jews.

Yoav Hattab was a student. Having graduated with his baccalaureate from the French Lycee in Tunis, he came to Paris to pursue studies in marketing. Like many his age, he found a casual job to support himself while studying.

And Yoav Hattab was an activist. Inspired by the fall of longtime dictator Zine El Abidine Ben Ali, he became e a prominent member of  the Tunisian Association for the Defence of Minorities.

Because of  the way France regards those who live on its territory, speak its tongue and embrace la vie francaise, Yoav Hattab was also a Frenchman. He lived near the Porte de Vincennes, and on Fridays it was his habit, while on his way home to prepare for Sabbath observance, to drop in to his local Hyper Cacher, one of a European chain of kosher supermarkets.

On January 7, that is just what he did. There he was taken captive, along with everyone else in the shop. But, like Todd Beamer aboard Flight 93 on September 11, 2001, and Lindt cafe manager Tori Johnson five weeks ago, he would distinguish himself by fighting back. He took the terrorist on.

Hattab noticed as Ahmedi Coulibaly placed one of his two shotguns on a box in the store. When Coulibaly spoke to a woman in the supermarket and turned his back on Hattab, he seized his chance, picked up the firearm and pulled the trigger.

The click of the safety catch, which was on, alerted Coulibaly, who, turning round and seeing Hattab’s hand still on the trigger, ended his life in seconds with a burst of fire from his other shotgun.

A survivor later revealed how Coulibaly used his murder to terrify his other hostages into submission, telling them: “See what happens to someone who stands up to me.”

Yoav Hattab — activist Jewish Tunisian Frenchman, hero, posthumous recipient of the Legion of Honour — could not foresee that he would be buried in faraway Jerusalem at a ceremony attended by thousands of Israelis.

He would not hear a family friend, Rene Trabelsi, recall him as a pious Jew who always wore his kippa (skullcap) but who lived in a thoroughly modern way. He would not hear that friend praise him as “altruistic and courageous” or his comment: “I’m sure he wasn’t thinking of himself when he confronted the terrorist, but about saving the maximum number of hostages.”

He would never have time to ponder the irony of how he became — without in the least wishing it — the very thing Ahmedi Coulibaly made such elaborate preparations to turn himself into: a martyr.