Do you even internet? Remember fax machines? Apparently they were machines in the analog era that you slid some paper into, and the machine called another machine on the telephone and got the second machine to print out your message, and the piece of paper would emerge at the other end and fall onto the floor and be ignored, assuming you didn’t type the wrong number. At least that was the idea, the old timers tell us. Anyway, at this morning’s enormously depressing hearing by the Joint Committee on Intelligence and Security on data retention, at which the politicians who are supposed to be subjecting a gross invasion of privacy and an assault on freedom of the press to some sort of basic scrutiny instead settled for having a slap at critics of the proposed scheme, faxes got a mention. How so? According to one of the witnesses at this morning’s hearing, Telstra — whose representatives patiently explained to the uncomprehending committee that putting every Australian’s metadata in one place would create an irresistible target for hackers — revealed something interesting. Whenever law enforcement agencies demand metadata from communications companies — which they do over 300,000 times a year, without any sort of oversight — they do so via … fax. It’s an elegant demonstration of just how profoundly uncomfortable government agencies are with 21st-century communications technologies that they won’t even use email to demand people’s data, but instead prefer a technology not much removed from going down to the telegraph office and sending a telegram. No wonder they regard the internet as a profound evil that must be fought at every turn. Perhaps opponents of the scheme like iiNet can circumvent it with the simple expedient of not putting any paper in the ancient device the AFP insists on using.

Top secret Keating info. Ms Tips was surprised to receive an “embargoed” press release from publishers Harper Collins today telling us all about David Day’s new biography of Paul Keating, imaginatively titled Paul Keating: The Biography. According to the release it features information we can’t publish until February 1, even though the book is already listed on the Harper Collins website (as available from January 27), and it will be launched by former attorney-general Mark Dreyfus at Readings in Carlton tomorrow night. So we don’t feel so bad telling you that “David Day has taken on the task of giving Keating the biography that he deserves”. Take that as you wish.

North face. Veteran Media, Arts and Entertainment Alliance organiser Louise Connor resigned from the journos’ and actors’ union in October, and told Crikey at the time she wanted to spend her long service leave converting an old newsagency she bought into a comfortable home. But as luck would have it she hasn’t had time to do much of that. Ms Tips caught up with her this morning and discovered since November she’s been living in Darwin as chief of staff to leader of the opposition Delia Lawrie. Connor’s never been a political staffer before, but told Crikey the skills needed were broadly similar to union organising. Lawrie was an old colleague of Connor’s at the Australian Journalists Association (before it amalgamated with the MEAA), and sought her out when Connor quit her old job. “And there’s never been a dull moment since,” she told us.

Uniform controversy. Staff at Sydney Trains have been grumbling about their new uniforms ever since they were introduced by Transport Minister Gladys Berejiklian last year. The range didn’t include shorts or winter coats, as was reported at their launch, but now Ms Tips hears staff have been grumbling that the contract was awarded to a company owned by Berejikian’s niece without a competitive tender process. We put that to the minister and were told that she doesn’t even have a niece. We double-checked that the contract wasn’t awarded to anyone in Berejiklian’s family and were told that it was “categorically untrue”. Maybe the heat went to Sydney Trains employees’ heads while they sweated through summer in pants.

Rupert’s doing? In today’s Australian Financial Review Phillip Coorey writes that it’s not unusual for the Prime Minister to take hiring and firing advice from Rupert Murdoch, and that media adviser Jane McMillan was let go right before Christmas on the advice of the media mogul (she’s been on leave since then). We’ve heard similar murmurings yesterday afternoon from a source saying that she was on the way out and that the “leave” may turn out to be indefinite. We asked the Prime Minister’s Office if this was correct, but didn’t hear back by deadline.

Real and electronic graffiti. While the Prime Minister has railed against social media as “electronic graffiti”, we’re glad that in Queensland people are getting on with retro graffiti — actually drawing on signs. And LNP MP Tarnya Smith didn’t let it get her down either, but used it as an opportunity to spruik the Newman government’s health policies. 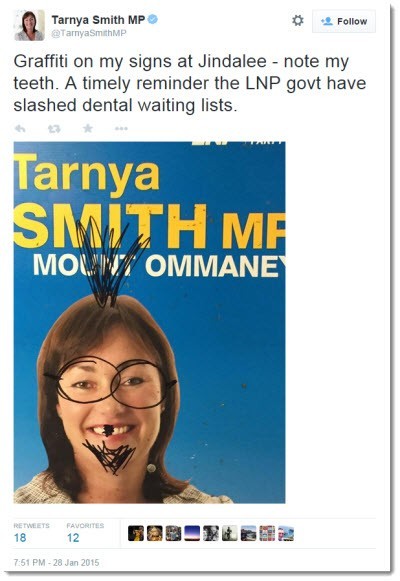 Also in Queensland, Campbell Newman has been campaigning directly for his seat, telling local voters in an email that he is a better pick than Labor’s Kate Jones. Getting nervous, Cam?

Selfies are nit OK. While it seems that there is a think piece a week blaming selfies for the world’s problems, it seems the teenagers of Queensland have more to worry about than duck face. According to The Chronicle, which covers Toowomba and surrounds, there has been a surge in cases of nits in the teenage population — and selfies are the culprit.

I assume the use of fax involves legal requirements for hard copy notice.

Utilising the one telecom tech that pretty much can’t be encrypted and is therefore guaranteed to be intercepted by even a dumb sniffer … and that’s the mob that stands as the bulwark against plots insidious and nefarious? And we’re being told we need to give these knuckleheads even more power? Asylum being run by inmates indeed.

Having a PS in a mass mail-out letter makes as much sense as having one in an Email.
Has this epidemic of postscripts spread to the missives of all the LNP candidates? It certainly has to mine (Ros Bates, current Mudgeeraba MP)

Any serious business office photocopier/scanner/printer machine has the ability to receive and send both emails and faxes, The Pav.