The unfair caste system of the AACTAs (crew, you may use the tradies’ entrance)

The AACTA awards are supposed to celebrate the best in Australian film. And they do ... if you are an actor or director. Film producer Louise Pascale explains the hierarchy.

Four years ago the Australian Film Institute became the Australian Academy of Cinema and Television Arts (AACTAs), in a rebranding that aimed to improve the profile of the industry. No longer an “institute”, Australia’s filmmakers were brought under a new banner: “academy”. It made us sound prestigious, and we even moved our awards ceremony to January in line with the US awards season.

The AFI was established in 1958, and we certainly needed a makeover. Over the past few decades we were losing audiences and relevance. So with a sexier statuette and the label of “academy”, it felt like we were really recognising a history of filmmaking in Australia. 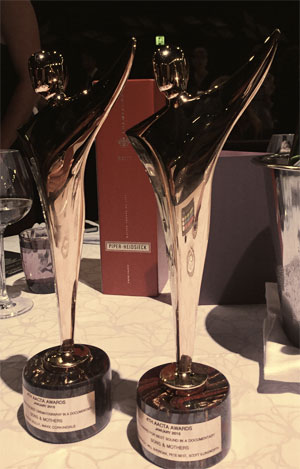 While some parts of the overhaul were obvious, there was another significant change that wasn’t so apparent. We moved our ceremony from Melbourne to Sydney’s glamorous shores and ditched the less star-studded bits of the awards from the broadcast. What we call the craft awards is now celebrated with a mid-week luncheon. For those who may have missed it, that was on Tuesday, and if the AACTAs stick to their short tradition, then tonight’s broadcast will give you a quick rundown of the winners. But the finer details will be missed.

Firstly, if they don’t bother to mention it in little montages during the broadcast, you could easily be left to believe we don’t award our hard-working crews, short films or documentaries at all. Sure it’s a good excuse to have a long boozy lunch, but it’s also about awarding excellence.

Australian crews have an incredible reputation internationally; it’s not just our locations and Fox Studios that bring the likes of Angelina Jolie and Steven Spielberg here. We are a fertile training ground. Just look at the success of Catherine Martin that stemmed from films like Priscilla, Queen of the Desert or Andrew Lesnie, who shot Babe well before winning Oscars for Lord of the Rings.

Tuesday’s awards could have been the beginning of a future Oscar winner, so why not broadcast it to the nation? If the Walkley Awards can manage a full broadcast on ABC iView, which can now be streamed to digital TV, why can’t we find a digital channel to do the same for us?

As a producer, being broadcast on a primary network does not matter that much to me. What matters is celebrating our industry together, just like on set. When you make a film, television series or documentary you become like family. Producers, writers, directors and actors are nothing without the crews there to realise the work.

They allow us to do what we do and we need to nurture them, celebrate them and use them to inspire the next generation of filmmakers. Giving them a moment in front of the camera next to our big names shows what is possible, and how your talents and passions can be crafted in so many ways. It is not just about whether you can write, act or even direct. It is also about how it sounds, how it looks and is cut together.

Rattling off winners in short packages throughout the TV broadcast gives audiences no context. It doesn’t show the level of competition or what is even in competition. It does not show how low-budget films made on the smell of an oily rag can beat those with big budgets.

Tuesday I saw this first hand when the low-budget documentary I produced, Sons and Mothers, won Best Cinematography in a Feature Documentary. Our film about a group of disabled actors creating a theatre show about their mothers was shot mainly in a rehearsal hall, and it beat Deepsea Challenge 3D. As the title implies, our main competition was a 3D documentary shot on a boat and in the deep sea — no easy task. But we proved that excellence in our craft comes in all forms. If you get to hear any of my cinematographer Maxx Corkindale’s speech, you will see he was shocked and humbled by the award. This was his first feature credit, and the AACTAs gave him a pat on the back that will have a profound impact on his career.

I may sound like a gushing proud mum, but for me as a producer this is what it’s about. It’s about showing our future filmmakers how to dream big and when the big budgets don’t come, still believe they are in with a chance at the AACTAs.

When I first attended the AFIs it was in 2007 as producer for the short film Swing, and it was one big celebration. We had a meal in Melbourne’s Crown Casino, the event was broadcast, and everyone was given L’Oreal showbags (the makeup giant was the sponsor at the time). This was my first short film and I had made it. I was rubbing shoulders with the stars, and craft awards were just as important as the big-name awards.

While I have romantic memories of having cocktails standing next to Geoffrey Rush, I have taken the rose-coloured glasses off. Sure we had actors presenting our awards on Tuesday, but they weren’t the Hollywood names of Cate Blanchett, Russell Crowe or Rose Byrne. They were TVs Adam Zwar (our host), Emma Lung, Michael Dorman and Brooke Satchwell.

And there was red carpet saved for them. Just like in 2007, we discovered there are two ways you enter — either ushered on to the red carpet, where photographers await, or down an alternate channel lined by the photographers’ backs. Which path you get, just like the ceremony, depends on which side of the camera is your livelihood.

While I laugh at the ridiculousness of it I still can’t help but feel this too demeans what it is all about. We may be used to working behind the camera and happy to avoid it at times, but why can’t we have our moment on the red carpet to at least take a selfie?

Just letting celebrities walk the red carpet at an awards ceremony where there are no categories for them makes no sense. Surely after putting in 12- to 14-hour days weeks on end to realise a writer’s words, a director’s vision and an actor’s performance we can give our crews a bit more respect.

The AACTAs get no awards for portrayal of women