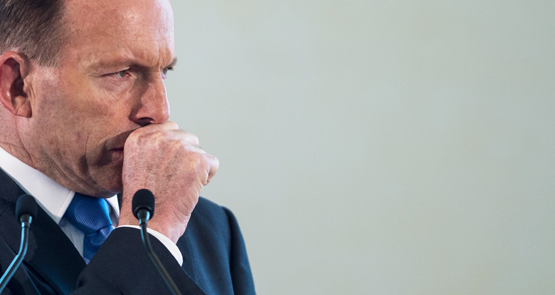 Never one to let a News Corp subsidiary drift, Rupert Murdoch plainly has strong views on the performance of senior executives of his troubled Australian project, the Abbott government. A joint venture with the Liberal Party, the Abbott government has performed well below forecasts since its launch in September 2013 and Murdoch, kept closely informed by his Australian staff, wants new blood brought in, a view he has expressed first in private and, evidently disgruntled that his JV partner is ignoring his views, now in public …

One could go on in such terms. Except that by demanding he dismiss his chief of staff, Murdoch has placed Abbott in a no-win situation, in which Abbott can’t let Peta Credlin go without appearing to demonstrate that his government is indeed just another subsidiary of the Murdoch empire, with executives hired and fired at the whim of the executive chairman. On the other hand, if one were inclined to Byzantine plotting, Abbott can’t retain Credlin without manifestly defying the will of the man whose papers campaigned so aggressively for him, creating the pretext for News Corp to move to openly backing Julie Bishop, on whom Murdoch bestowed his blessing on the weekend.

It’s all as if Murdoch had decided to play the role of efficiency expert and, having run the ruler over the Prime Minister’s Office, had drawn up a list of underperformers who needed to be removed — first Jane McMillan, Abbott’s communications director, who according to the Financial Review today was removed after a private demand by Murdoch late last year, and now Peta Credlin, targeted in the most public and humiliating manner, via the very “electronic graffiti” of which Abbott had been so dismissive earlier in the week.

Alas, if only Rupert had been so interested in the performance of his own executives while they were overseeing industrial-scale phone hacking and bribery in the UK.

And, by the way, what do McMillan and Credlin have in common, apart from their gender? McMillan was media adviser for Helen Coonan, under Credlin as her chief of staff, when Coonan was communications minister in the Howard government. It was Credlin, with McMillan among her staff, who oversaw the successful passage of media ownership reforms in 2006. Those reforms were a huge win for the TV networks and particularly James Packer, who sold Nine to foreign private equity virtually the moment the bill was carried in the Senate. They were not a win of any kind for News Ltd, as it then was — all News got was a commitment to “use it or lose it” anti-siphoning rules, while it lost the crucial battle to keep the ban on free-to-air TV multichannelling.

Perhaps there are some long memories at News Corp.

Credlin, Credlin, Credlin … how did a chief of staff ever get to be a trending topic on the electronic graffiti and the dominant political topic in the country? She’s become the target for ever more bizarre complaints and demands. She’s too controlling and Abbott relies too much on her was the complaint for most of 2014, except now she’s not controlling enough because she failed to stop Abbott from inflicting the Prince Philip disaster on himself (and funny how that “have it both ways” thing crops up when women are being criticised). Although she has barely said a word publicly as chief of staff, there are now calls for her head because she’s become too high profile — the ultimate in the media getting to play judge, jury and executioner. Most ridiculous of all is the argument, ventured by News Corp attack shih tzu Miranda Devine, that Credlin needs to be dispatched as a kind of ritual sacrifice to demonstrate Abbott’s good faith to his colleagues, bringing to mind nothing so much as the Beyond The Fringe sketch in which a WW II officer is told to make a “futile gesture” to “raise the whole tone of the war.”

That the PMO — like any PMO — shares responsibility for the government’s failures is naturally undeniable. But as Crikey noted in December, a close look at the government’s failings shows that it is ministers who are chiefly responsible. If Credlin should go, surely Joe Hockey should go for a long series of gaffes that derailed the selling of the budget; Peter Dutton should go — well, he sort of has already — for miserably failing to sell a Medicare co-payment. Christopher Pyne should go for botching the higher education reform package. But then, that would involve ministers actually taking some responsibility for their own portfolios.

And most of all there’s Tony Abbott himself. As even News Corp commentators are increasingly saying, Abbott isn’t up to the job of prime minister and shows no signs of growing into it. How many more times will Abbott make a disastrous “captain’s pick” and promise to consult more? For all their faults, Kevin Rudd led Australia safely through the financial crisis, and Julia Gillard made a legislative success out of minority government and managed the unprecedented feat of landing a mining investment boom without an inflationary explosion. And they did so in the face of remorseless, bitter hatred from Murdoch and his spear carriers. Abbott has had virtually a free hand to do what he likes with the support of the dominant media company in the country, and he has constantly stumbled.

The problem isn’t in the PMO, it’s in the head of Tony Abbott, and in the heads of lazy, inept ministers who have failed to do the basics in their own portfolios. Ceremonially executing staffers isn’t going to change that, no matter what ukazes are issued from Murdoch’s One Madison penthouse in New York.

Turnbull should learn some lessons from Abbott and Credlin

This was a brilliant article.

The LNP don’t seem to understand that their issues with the public are not of presentation, but of the actual substance of their proposals.

What don’t people understand about “born to rule”?

Yes a brilliant article. What we see emerging is the influence that Murdoch has played in politics. And its not nice.