Gawker suggests Rupert Murdoch may tweet while drunk. But Helen Razer thinks there may be a more poetic explanation ... 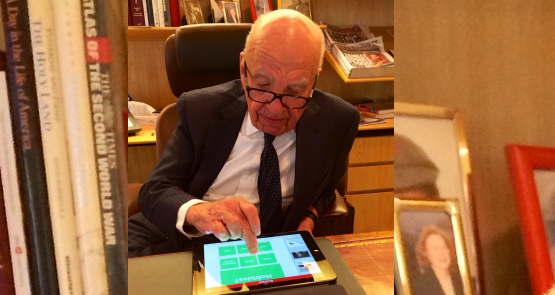 As any Australian moved to unlawfully download Game of Thrones will attest, Rupert Murdoch has a sluggish approach to fast new tech. Just as he cleaves to an antique distribution engine, with a little help from local News Corp attendant George Brandis, he lacks the modern knack in his use of social platforms. Murdoch’s tweets, lately in discussion for personnel recommendations to the Prime Minister, have long provided laughs to any soul more fluent in the cant of online branding than the guy who manages the Islamic State YouTube channel. K.R. Murdoch’s personal use of the social internet is both brutal and crude.

Certainly, the Murdoch thumb seems as unskilled in the operation of its iPad as the Murdoch Empire is with the needs of iPad users. It is, perhaps, his ignorant aversion to 21st-century media that produces empty or bizarre dispatches. Although Gawker posits that liquor might be behind curious declarations like “all Egyptians are white”, there is possibly another and more scholarly influence at play in the papal knight’s short works: maybe the guy loves poetry.

Over time, Murdoch’s tweets have evinced a style too dependable to be the byproduct of poor tablet literacy alone.  His free verbal repetition — “Believe Gawker, believe any nonsense” — and fondness for the hard return have begun to reveal a despot with a modernist’s heart. Part telegram, part Old Testament raging, the patriarch’s works may owe more to T.S. Eliot than they do to hard grog.

As literary and theatre critic Cam Woodhead has it, the spare experimentation of Gertrude Stein can be seen online in the Murdoch lab. “His go-to word on Twitter is the adverb ‘just’ (no one would accuse him of overusing the adjective, or even knowing what it means). And if you ignore the massive ego and patriarchal sentiments, you can sense shades of Stein in the phrasing,” said Woodhead. And he asks us to compare a line from the great modernist’s study in banality Tender Buttons …

with one of his early fragments …

This repetitive arrangement of words, seen in the work of Eliot and Stein and many modernist others, is a device intended to deliver the reader from triviality both of the object — in Stein’s case, a dress, and in Murdoch’s case, a shitty film — and of everyday language. We Anglophones learn not to repeat in ordinary speech, and the repetitive technique of 20th-century poets was one intended to disclose unexpected beauty and evoke Freudian notions of word association.

You can giggle all you wish at these undergrad English musings, but the plain fact is, Murdoch, who sacrifices the narrator’s “I” for his love of repetition, read at Oxford at the height of modernism.

“I’m worried about my son Rupert,” Keith Murdoch wrote in a letter to Daily Mirror editor Hugh Cudlipp. “He’s at Oxford and developing the most alarming left-wing views.” While “Red Rupe” was redeemed from the teachings of the Frankfurt School, perhaps he never misplaced his fondness for mid-century wordplay.

Woodhead sees American imagist William Carlos Williams creeps at play in the Murdoch iPad. He “seems to love the gushy postcardese tactic of one word sentences with an exclamation point”. Compare this from A Sort of Song …

Compose. (No ideas
but in things) Invent!
Saxifrage is my flower that splits
the rocks.

Rupert’s father famously brought the verse of C.J. Dennis to a daily attention and if anything is going to drive a young Oxbridge candidate to the economical beauty of modernist poetry, it is those florid Songs of a Sentimental Bloke. Impact from the short influential jolts of Frost and Eliot, both conservative men, can still be felt in the Credlin-crushing tweets of Murdoch.

Perhaps, he sees, as Gina Rinehart does, poetry as his redemption. Perhaps we should prepare for a volume of verse from Harper Collins. Certainly, there are literary antecedents to Murdoch’s output as influential as Chateau Margaux and tablet misuse. But let’s not do these greats too much of a disservice through this association. As Cam says, “whatever missteps the modernists made, at least they were intentional. You can tell from his very first tweet that the resemblance is, often as not, caused by Murdoch’s epic fail with new media and the tech behind it.”

I am just tired of all the attention given to Rupert. He is a very old man now and really can you justify all the column inches? His sons sound a lot worse than he is. I think best not to give the family the air time. The abasement of our politicians is easy to watch.

Sorry -substitute NOT east to watch.

Rupert Murdoch and Gina Rinehart are both pompous, opinionated ,born with golden spoons in their mouths, silver spoons up their arses, gentry who have not done one day’s honest work in their lives.
Both have the audacity to tell Australian politicians what to do. Even worse, most Australian politicians listen. If that is not bad enough, the main street media encourage this nonsense.
There are millions of Tweets a minute, but why does the media pick and then publish Murdoch’s” inanities ?