Media briefs: Abbott can’t catch a break … Margaret and Graeme … how to beat the ABC …

Is anyone rooting for the Prime Minister this morning? And other media tidbits of the day.

Even the letter writers are sick of him. “One can only say ‘God save the Queen’, because nothing will save the PM” … “Tony Abbott’s statement that people he met on his holidays said he was performing OK shows how far out of touch he has become with voters” … “What have the Australian people done to deserve this political shambles?” … etc, etc.

What am I reading? The Australian‘s letters page of course, which features 20 letters today either bagging Tony Abbott’s leadership or his choice to knight Prince Philip. The readers want Julie Bishop, Turnbull, even Josh Frydenberg ahead of Abbott. Yesterday’s letters page was better — 16 anti-Abbott letters, with five in support. Still, with the decision now half a week behind him, it’s still drawing censure. And from Coalition loyalists like the Oz‘s letter-writers to boot. The poor PM, a former journalist on that paper himself, can’t seem to catch a break.

Incidentally, Andrew Bolt doesn’t like the knighthood either. — Myriam Robin

Peppa has the last laugh. Remember how Piers Akerman made a right goose of himself in late 2013 by “discovering” a left-wing feminist plot in Peppa Pig on ABC TV? “Even the cartoon character Peppa Pig pushes a weird feminist line that would be closer to the hearts of Labor’s Handbag Hit Squad than the preschool audience it is aimed at,” Akerman wrote in Sydney’s Daily Telegraph in late 2013.

Even columnists at News Corp papers, including The Daily Telegraph, laughed at Piers. Now Pig and her owners have had the last laugh, after they revealed that she has become the company’s biggest earner.

Pig’s owner, Entertainment One (eOne), said this week it expected to double licensing revenues later this year when it entered the huge US market, selling Pig and her merchandise through Walmart stores. Entries into the Chinese, Japanese and South Korean markets are also planned.

“Peppa Pig goes from strength to strength both in established markets and newer territories,” the film and TV distributor said in a trading update on Tuesday night, our time. The overall retail value of Peppa Pig merchandise is expected to exceed US$1 billion this year and will make up more than one-fifth of eOne’s earnings before interest, tax, depreciation and amortisation this year of an estimated A$190 million, according to UK brokers. — Glenn Dyer

Margaret and … Graeme? Margaret Pomeranz has a new gig. She’s joining Foxtel, which is launching a new arts channel, to co-host a weekly culture program with Oz TV commentator Graeme Blundell. She’ll also present a weekly movie of her choice on Wednesday’s at 8.30pm on Foxtel Movies Masterpiece, starting from March 4. — Myriam Robin

Sullivan calls it quits. American blogger extraordinaire Andrew Sullivan announced overnight that he’s to stop blogging. In a note on his website The Dish, he said that after 15 years of blogging daily, “there comes a time when you have to move on to new things, shake your world up, or reorganise before you crash”:

“I am saturated in digital life and I want to return to the actual world again. I’m a human being before I am a writer; and a writer before I am a blogger, and although it’s been a joy and a privilege to have helped pioneer a genuinely new form of writing, I yearn for other, older forms.”

While he hasn’t announced what this means for The Dish, he has said it’s disabling its paywall and cancelling auto-subscriptions.

Sullivan has gone through a variety of business models with his blog. It’s been housed at Time, The Atlantic and the Daily Beast, until early 2013, when he announced he would run it alone. He launched subscriptions and had a first-year goal of making US$900,000 in revenue to support himself and a small staff. It finished its first calendar year with revenues of US$875,000, of which most came from 34,000 subscribers and $24,000 from Amazon’s affiliate program. — Myriam Robin

More uncertainty at the ABC. ABC staff were yesterday sent the 10th of what have become acting director of people Alan Sunderland’s regular updates on the process of finalising ABC budget cuts. Consultations drag on but have been concluded for several of management’s proposals, Sunderland says. These include changes to the ABC’s corporate affairs division, its audience and marketing division, its mail room, its news strategy and policy divisions, and several of its specialised TV “overheads” teams. Sunderland wrote:

“More than a third of the people we are losing as a result of these changes have already left the ABC, and many others will be setting their departures dates over the next few weeks.”

How Nine won Gallipoli. Endemol’s eight-hour Gallipoli miniseries will air on Channel Nine this year, even though producer John Edwards initially thought its more natural home was the ABC. Speaking to TV Tonight, he reveals the lengths Nine’s execs went to secure the series for their network:

“We basically said to everybody, ‘If you want it you tell us. Give us your marketing plan.’

“Around the foyer of Nine there were these beautiful posters of Gallipoli artwork, with a soldier in the mist and the words ‘The Television Event of the Century’ and an air date on it.

“I stepped out of the lift on the third floor at Channel Nine and there were two soldiers in period dress saluting us, marching us down the corridor to the Board Room. The doors open with the Nine execs sitting there with rosemary in their lapels, billy tea, damper, ANZAC biscuits and then they presented us — in the same logo as the poster — a 27-page marketing book with their plans. [Nine director of television] Michael Healy’s words were, ‘Is it clear that we want it?’

The ABC, Edwards says, confused their meeting with another one.

We failed: NYT editor. In a surprisingly honest interview with German newspaper Der Spiegel, The New York Times’ newish executive editor Dean Baquet says his publication “absolutely” failed in its coverage leading up to the Iraq War (mark I):

Asked how he felt when Edward Snowden didn’t approach the NYT with his NSA leak, Baquet said:

“It hurt a lot. It meant two things. Morally, it meant that somebody with a big story to tell didn’t think we were the place to go, and that’s painful. And then it also meant that we got beaten on what was arguably the biggest national security story in many, many years. Not only beaten by The Guardian, because he went to The Guardian, but beaten by the Post, because he went to a writer from the Post. We tried to catch up and did some really good stories that I feel good about. But it was really, really, really painful.”

Front page of the day. There’s a storm in New York. While the New York Post went with “CLOSED” boldly printed atop a photo of a snowstorm, we do like the elegance of local paper The Staten Island Advance … 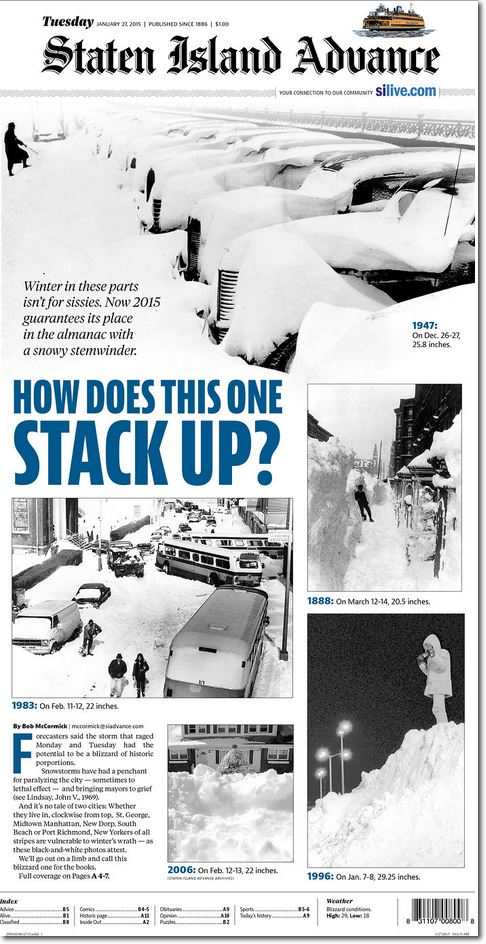 Could Bolt do a Sullivan and blog solo? Don’t hold your breath