Tony Abbott has defended his captain’s pick of Prince Philip for Australia Day honours against the “electronic graffiti” of social media, but print publications around the world have joined in the fun.

The Diplomat in Japan suggested this was yet another gaffe by a gaffe-prone PM. Its piece was headed “Good Knight, Mr. Abbott?” and sub-headed “In another misstep, Australian Prime Minister Tony Abbott knights Prince Philip”.

“After his government’s cuts to the Australian Broadcasting Corporation and the Special Broadcasting Service, Abbott has essentially put the nation’s satirists out of work. Even John Oliver, a Brit, would have a hard time making the Australian prime minister appear any more ridiculous than he does on his own steam. Right now it is about all he seems to be doing well.”

Another Irish newspaper, The Times, was amused by Abbott’s approvals:

“The only person Prime Minister Tony Abbott consulted before awarding an Australian knighthood to Prince Philip was former defence force chief Angus Houston — who was also knighted. And the only person Mr Abbott consulted about knighting Mr Houston was Governor General Sir Peter Cosgrove, who was knighted last year.”

Other German reports highlighted “Ein Premierminister in der ‘Zeitschleife'” — A prime minister in a time warp.

The pun is clarified later:

“Abbott brought the knighthood tradition out of mothballs last year, earning him criticism for being a royalist.”

In Holland, the Elsevier reported that “ministers in the Australian government are surprised, angry and disappointed — verrast, boos en teleurgesteld — at the decision by Prime Minister Tony Abbott to appoint Britain’s Prince Philip a knight”.

The Guardian in Britain emphasised the “anger and derision among colleagues” Abbott has copped. It added “conservative columnists and supporters have joined a chorus of scorn”.

“The move to honour Prince Philip has been widely ridiculed and has fuelled speculation about Mr Abbott’s future as leader of the ruling conservative coalition.”

Le Petit Journal claims this controversy will allow Australian republicans to revive the debate about modernising the country, “starting with abolishing ties with British royalty”.

“Australian PM Faces Backlash Over Royal ‘Knightmare’”, led The Jakarta Globe. Both it and Kompas emphasised the ridicule from Abbott’s colleagues, who called the decision “keliru dan bodoh” — wrong and stupid.

The Straits Times ascribes the “time warp” expression to Opposition Leader Bill Shorten, to whom it attributes also: “I wasn’t quite sure it was serious until I realised it was.”

The conservative New Zealand Herald played it straight with support for the embattled PM across the strait. Its sympathetic piece was headed “Australian PM Tony Abbott promises wider consultation over future knighthoods”. It insisted “he weathered an avalanche of criticism over his decision to make Prince Philip an Australian knight”.

But then it ran a delightfully disrespectful cartoon: The story has also been covered in Denmark, Pakistan, the USA and elsewhere. 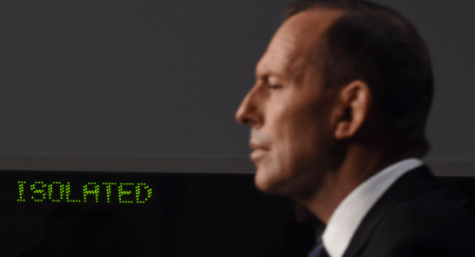 ‘Zeitschleife’! What a great word – much more interesting (and somehow more damning) than ‘timewarp’!

I give Abbott full credit for making me laugh more heartily and enduringly than any other PM in living history. It’s almost been worth the pain since Sept 2013.

LC @ 1; that has gone into my lexicon also. The Germans (and French) have a mocking tilt at the Royals whenever they can; this would have been gold for them.
What a fine PM has been elected, the laughing stock of the world’s press. I guess we can be pleased that Australia is getting some free publicity (for all the wrong reasons). Someone save us from this embarassment!

And while they all titter on about his our disgustingly racist high court judges have deemed that we are allowed to kidnap,imprison and deport people at sea.

Luckily it is not a strait that separates us folk in New Zealand from Australia. It is a Sea and a couple of hundred years. I must confess our PM did reinstate knights and dames some time back but since Rupert Murdock does not own a newspaper in NZ he has held on to his job.