While the ICAC blowtorch was focused on ALP politicians, conservatives applauded from the sidelines, happy to see Labor’s scandals unearthed and publicised. They seem to have changed their tune. 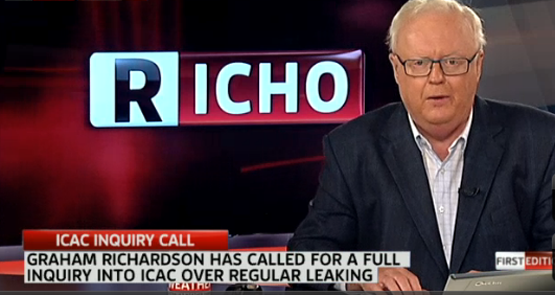 He opened this year’s season of Richo on Sky TV with a full-frontal blast against ICAC and Sydney Morning Herald investigative journalist Kate McClymont. He accused ICAC of leaking a story to McClymont that he had been recently interviewed by commission investigators about a property deal involving Richard Torbay, the former NSW parliamentary speaker.

He wrote in his column in The Australian:

“Now it is over to NSW Premier Mike Baird. He would know already there is considerable disquiet in legal circles about ICAC.”

On the contrary, the disquiet is almost exclusively confined to political circles that are feeling the heat of ICAC investigations. The Liberals have lost two premiers, Nick Greiner in 1992 and Barry O’Farrell in 2014, after they were caught in the wheels of ICAC investigations but subsequently cleared of any wrongdoing.

In the final days of the last state Parliament, two outgoing Liberal MPs used their farewell speeches to complain about the ICAC, an instrument their own party had created.

Darren Webber, MP for Wyong, who was named in the ICAC’s donations investigation, told MPs:

“I am bitterly disappointed to be leaving this place under the circumstances in which I am. I completely reject the false and baseless allegations made against me …

“Appearing before a public inquiry is a terrible experience, and it takes a huge toll on personal relationships.”

Garry Edwards, MP for Swansea, referred to the watchdog as the “totally unregulated, totally unaccountable fishing trawler, the MV ICAC”.

“It is a ghostly vessel that sails the corridors of the unsuspecting, with state-sanctioned impunity, destroying all in its path — other than that which, again with apparent impunity, it elects to overlook.”

The main charge against ICAC is “overreach”, a euphemism for the commission’s public hearings at which senior politicians and public servants are named and shamed in the witness box giving evidence on oath.

Opponents want ICAC’s search and surveillance powers curbed and its public hearings restricted. To cripple ICAC’s ability to function effectively, pressure is mounting to cut its budget or enforce a merger with the Ombudsman’s Office or the Police Integrity Commission where it will become lost in a fog of bureaucracy.

Extraordinarily, the political hounds have started barking at a stellar time in ICAC’s 24-year history. Nine public inquiries were held in 2013-14 covering the activities of Labor ministers Eddie Obeid, Ian Macdonald, Tony Kelly and Eric Roozendaal as well as a dozen Liberal ministers and MPs across the central coast and the Hunter.

It received and dealt with 3386 matters, completed 49 preliminary investigations and 14 operations, and delivered 79 corruption-prevention speaking engagements to more than 3250 people.

At the end of the 2013-14 financial year, 22 people were before courts in NSW as a result of ICAC referrals, and in the previous 30 months, 35 people had pleaded guilty or been found guilty of charges arising from ICAC investigations.

It is the very success of ICAC under its two most recent commissioners, David Ipp QC and Megan Latham QC, former NSW Supreme Court judges, that is distressing the political class. When the commission’s public standing is at an all-time high and the Greens are calling for a Commonwealth ICAC, the Coalition parties and Labor are taking aim at the source of their distress.

The acid test for Premier Mike Baird will be to give an ironclad pre-election guarantee the ICAC will not be castrated, but corrupt politicians will be.

Re Richo’ statement: I seem to remember that when he was part of a Federal Labor Government he tried to lean on an immigration official to issue a visa to a shady mate but the official stood firm which was the right thing to do of course but looked even better when the matter became public later.

There’s no doubt we need a federal ICAC if only to ensure that the sort of corruption and undue influence unearthed in NSW doesn’t occur federally. Methinks those who protest too much do so for reasons not entirely pure!

… and maybe corrupt politicians could be “neutered” rather than “castrated” (which is a bit sexist?)?