Coincidences mount in the search for MH370 as Malaysian authorities prepare to release an interim report on the flight's mystery disappearance.

It might be a coincidence that three of the four vessels searching for MH370 came quite close together in a particular part of the south Indian Ocean yesterday. It might also be a coincidence that Malaysia has signaled it will issue a second interim report on the disappearance of the Malaysia Airlines Boeing 777-200ER on March 7, one day short of the first anniversary of its disappearance.

But as the graphic supplied by Mike Chillit, a US-based ship tracker, shows, there does seem to be a lot of interest where the 90th east meridian meets 37 degrees south latitude, south-west of Perth.

This is in the vicinity of where the first informed guesses were made of MH370’s likely impact with the sea, with at least 239 people on board, on March 8, 2014, after it suddenly went dark — meaning air-traffic control lost track of the plane’s transponder signal — over the Gulf of Thailand on its way from Kuala Lumpur to Beijing with a cargo manifest that has not, to this day, been fully revealed.

(It is more or less where a White House spokesperson said, five days later, that the jet was believed to have crashed, based on satellite images of possible floating wreckage from the flight.)

The jet suddenly veered off course, crossed west above the Malaysia Peninsula, and ultimately, according to satellite data which picked up a semi-regular signal from the flight, turned south and flew into oblivion somewhere over the south Indian Ocean.

It is important not to get too carried away with the shipping news from the Australian-led search area, just as it is prudent not to ignore it.

Mike Chillit shows the search routes being sailed by the Fugros — Equator, Discovery and new arrival, Supporter — this evening, eastern Australian time. Fugro Supporter is carrying an automated underwater vehicle capable of searching the deepest and most confusing wrinkles and “black holes” in the ocean floor, where wreckage mighty have escaped the resolution of earlier search coverage along the so-called seventh arc of impact possibilities.

On this graphic (below) the focus of theoretical impact points calculated by the sceptical but expert Independent Group, the ATSB, and an Inmarsat calculation are shown, as well as the possibly coincidental bunching up of the vessels. 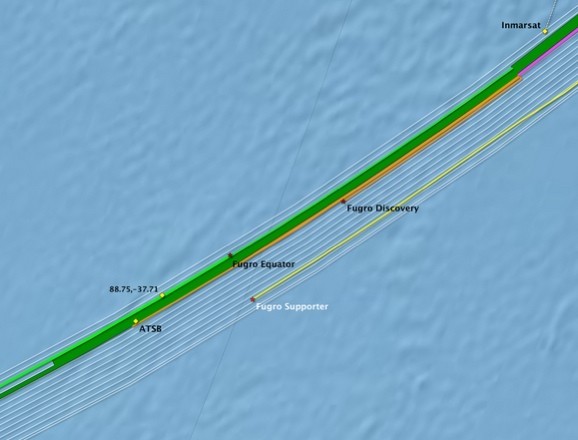 With thanks to @Mike Chillit

It took quite some time for the Independent Group to capture the attention of the Australian-led search. Its optimal impact point calculation is identified as 37.71 degrees south and 88.75 degrees east. There might be an assumption that wreckage was circulated to the east or north-east by a current, or driven in that direction by winds and waves if it was stuff that floated for a while and then sank.

But that is, for those outside the tent, all conjecture.

Yesterday’s announcement in Kuala Lumpur that an interim report concerning the disappearance of MH370 will come out one day before the International Civil Aviation Organization protocol — the ICAO says air accident reports should be made within 30 days — and then a full year after the event doesn’t mean it is the final report.

After the first interim or preliminary report, an investigation can make as many such reports as it sees fit, consistent with the objective of advancing air safety, provided the second one comes out within a year.

So it can’t be said that this second MH370 report is going to be orchestrated to follow the discovery of the wreckage. It might be nice, but if the wreckage were identified tomorrow it would be quite a stretch to envisage either or both of the flight recorders being recovered and analysed in that period, or other crucial parts of the wreckage being brought to the surface for study.

The first interim report by the Malaysian investigation team was not released until May 1 last year, and it coincided with the extraordinary revelation — made to an apparently sleeping media and revealed by then-acting transport minister Hishammuddin Hussein — that cabinet had known about the western turnback on the morning of the crash, while officials lied about it to the media, and Prime Minister Najib Razak urged search partner nations to extend their resources even further into the South China Sea while knowing this was misleading, pointless and cruel to those hoping their loved ones were alive.

MH370 has everything. A lying government in Kuala Lumpur, suppressed cargo details, implausible scenarios as to cause or blame, and some very strange search decisions at times, while the forensic work on estimating what path the jet actually flew until its fuel ran out sits at the extreme end of flight modelling based on a range of reasonable, yet possibly incorrect assumptions.

It also has the grief and loss of the families and friends of the 239 victims. Will they ever learn the truth?