Why Melbourne Bike Share riders shouldn’t have to wear helmets

The new Victorian government has to decide what to do about the lacklustre performance of Melbourne Bicycle Share. One possible action could be to exempt it from the mandatory helmet law. 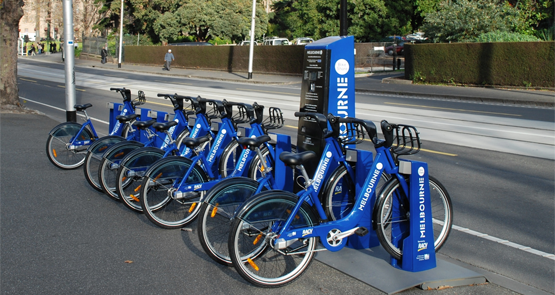 Melbourne Bike Share (MBS) is a white elephant. It has struggled to attract riders in even modest numbers since it was set up with 600 bikes (Bixis) by the Brumby government nearly five years ago.

The current five-year $5.5 million contract is due to expire in June this year; given its poor performance, the real cost to taxpayers is, undoubtedly, considerably more.

MBS is a case study in poor policy-making. The warrant for providing a public subsidy in terms of environmental benefits and the need for improved mobility in the city centre was never established and is tenuous at best. Bike share doesn’t replace car trips, and Melbourne’s city centre already has great walking and public transport options (now boosted by free CBD tram travel).

The feasibility of the scheme wasn’t thought through properly either. The suppression of demand by factors like the mandatory helmet law and perceptions of unsafe traffic conditions was seriously underestimated. On top of all that, it was poorly designed. In particular, the area covered is too small and the density of bikes is too low. It was done “on the cheap” because it was motivated by appearances, not real outcomes.

It’s therefore no surprise MBS limped along from day one. Unless the government is prepared to make serious changes designed to make it work much better, continuing it beyond the current contract shouldn’t be an option.

The Napthine government sought expressions of interest in an expanded scheme operated on a non-subsidised basis, but failed to attract any bidders.

The simplest choice for the new Andrews government might be to kill off MBS on the grounds it patently hasn’t worked. It could use the introduction of free CBD tram travel from the start of this year as an additional justification.

But I can’t see that happening because MBS already exists. It would be very difficult politically for the same reason it was set up in the first place: irrespective of what it actually contributes in practice, it’s a potent symbol of the government’s commitment to sustainability.

Another option would be to expand MBS’ geographical coverage in the hope that adding scale would dramatically increase usage. That could be costly; New York’s successful Citi Bike scheme, which launched in 2013 with 6000 bikes, cost $40-$50 million to establish (all of it privately funded).

The parts of Manhattan and Brooklyn covered by Citi Bike aren’t especially large. It covers about 30 square kilometres, roughly equivalent to the area within a three-kilometre radius of Melbourne Town Hall (i.e. to Victoria station, Collingwood; to East Richmond station; to Albert Park Lake; or to the cemetery in Carlton North).

That’s the sort of coverage MBS needs at a minimum to be useful, but in light of its lame performance there’s a serious risk that expansion would be a case of throwing good money after bad.

Many observers think the mandatory helmet law is the critical reason for MBS’ poor record. If the government wants to continue with the scheme, it should exempt MBS from the helmet law.

That would invite plenty of criticism because there’s a near-unanimous consensus in the general population that the helmet law is self-evidently sensible. It would therefore be absolutely critical to draw a convincing distinction between how the law should relate to bike share on the one hand and private cycling on the other.

There are a number of arguments the government could put forward to justify an exemption solely for MBS.

First, circumstances have changed a lot in the years since MBS was set up way back in 2010. An accumulation of new evidence from more recent implementations like NYC’s Citi Bike shows that bike-share schemes are extraordinarily safe for users compared to private cycling.

That seems to be largely because bike-share riders are very cautious, probably because they’re mostly novices or occasional cyclists. The great majority of cycling casualties on Australian roads are in fact accounted for by very experienced cyclists, especially those who ride road bikes and wear lycra.

Second, the helmet law imposes constraints on bike share that don’t apply to private cycling — i.e. casual users can’t reasonably be expected to carry a helmet with them, or buy a new one, in order to ride a Bixi.

Third, many of the roads within the area covered by MBS’ 50 stations — including the entire Hoddle grid — are now subject to 40 km/h speed limits. There’s also a lot of high-quality cycling infrastructure in the inner city.

Fourth, the exemption would be confined to that tiny percent of the population — and of all cyclists — who choose to use MBS. It would also be easy to police; only those riding a readily recognisable Bixi would qualify.

While there’d be political risks with an exemption, it would offer tangible benefits to the government too. Importantly, it wouldn’t involve any significant additional cost. It would also be received well by progressively inclined voters, especially those residing in the inner city.

But it wouldn’t necessarily be a silver bullet. I think an exemption would improve the fortunes of MBS significantly, but not to the degree most observers imagine. I think other constraints on demand like safety and scale are at least as important as the helmet law in explaining the scheme’s poor performance, perhaps more so.

But it would certainly address a real problem and it’s unlikely MBS could ever achieve its full potential (whatever that might be) while the helmet law is in place.

Why is bikeshare failing in Australian cities?

Should the helmet law be repealed to save bikeshare?