Rundle: the notorious Allen Jones, who shocked the unshockable

Allen Jones has gone from enfant terrible of the avant-garde to a bit of a historical footnote. 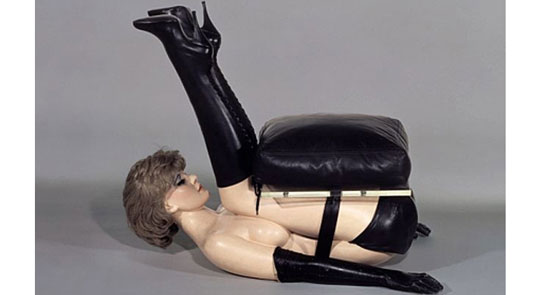 “Good god, who’s Allen Jones?” someone asked, beneath the huge banner outside London’s Royal Academy, featuring a pneumatic blonde with spangled tits sharpened like missiles. Her partner, a fellow hipster, shook his head. That is a measure of the times, for he was not merely famous, but notorious for 25 years on the basis of a series of works that he first tried to get away from and has now returned to simply repeating. Uniquely among later modernism of the post-war avant-garde, he cut against the grain — of its politics, of its culture, of its assumptions. It wasn’t a particularly heroic act, and he might have had a major retrospective a lot earlier if he hadn’t. On the other hand, on the strength of much of his other work here, he might never have got one at all. His story is that not merely of an oeuvre, but of an era.

Jones had been a figure in the post-war British style of high-colour figuration, best known in the work of R.B.Kitaj. The style avoided both pure abstraction and realist figuration, tending towards stylised and crowded canvases. Influenced by Grosz, Leger and other hard leftist artists, who saw pure abstraction as an abandonment of the relations between world and artist, the style was centred at the Hornsey College of Art in South London, with David Hockney. Hornsey would later be the centre of London ’60s student sit-ins, a measure of its radical character.

By that time Hockney had spirited the critical figurative style to Los Angeles, where it had undergone major transformations. Jones’ work through the first half of the ’60s remained bound within that mix of formal experimentation and social documentary. Crowd scenes dominate initially, with fields of raw colour separate to drawn figures, busting out of their boundaries, and a beginning of the experimentation with shading off, tapering, and airbrush-like effects that he would continue to explore for the rest of his career.

By 1965, the themes of pop art were beginning to make an appearance, with branded objects, knick-knacks of the new prosperity — and, uniquely in the field, female accoutrements of a sexual nature: red lipstick, the tops of  stockings and suspenders. Curious Woman of that year remains primarily focused on the arrangement of parts and colour, white and olive green, but this time the parts are of a woman. Whatever dash of fetishism was added, it was no more than a cheeky touch to what was otherwise the most traditional art object, the female torso.

Nothing indicated that Jones would be anything other than an artist working a lifelong seam, and a narrow one at that, of formal experimentation. And then in 1969, Jones exhibited Chair, Table and Hat Stand, three furniture pieces. You know them even if you don’t know them, because each was made of the fibreglass statue of a curvaceous woman in fetish gear — tight-laced corsets, punishing metal bras, and thigh-high lace-up boots. The table in question was a glass one, supported by the woman on all fours. 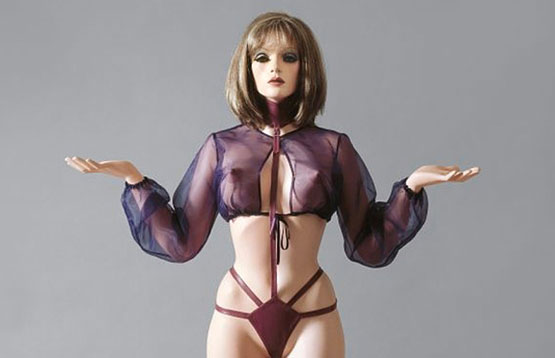 The Bettie Page postcards, shot in dowdy upper rooms, the amateur schoolgirl bondage mags, the black-and-white “Bizarre” comic strips of the Sydney-born John Willie had fed off the sexual repression of the 1950s for their power. But with the rise of Playboy, explicit mainstream cinema, and the post-pill sexual revolution took the oomph out of them. It was only in the ’80s, when the sexual revolution had run out of oomph itself, that  repression became more interesting than desire, and 20th-century schlock fetish became a cause celebre.

Jones’ detour into an entirely different medium, form, and a radically different type of expression — literal, but fantastic — dropped into the realm of what was still high art like a bomb. It occurred at the same time as the women’s lib phase of second-wave feminism was rising, with street protests against any number of sexist activities, from beauty contests to low-paying employers. It occurred as pop art had started to move into the realm of the “happening”, and then conceptual art, challenging the whole idea of the art object as inherently commodified. Jones’ furniture pieces went in the opposite direction, concretised, literalised, fetishised. He would come to do a dozen or more such furniture pieces — most tables, with women prone — usually in editions of six.

The pieces were met with a storm of protest, which didn’t abate for two decades. Even when learning art history in the ’80s, and being indoctrinated into the “shock of the new”, this was too much shock. Everything else was taught as something to learn and understand; Jones’ sculptures were taught as debate, largely weighted in one direction. Jones himself claimed that they were designed not merely to shock — which had become routinised — but to shock shock, to shock art. The show has put two of the table-pieces in the first room of the exhibition at the stately Burlington Gardens gallery of the Royal Academy, in the manner of a band that only ever had two hits playing them both first off, to get them out of the way. The show’s notes say that Jones had neither “courted or anticipated” the reaction they would get — which included a call, from within the heart of the avant-garde, for them to be banned.

Well, maybe, but the show also includes a typewritten guide to maintaining the sculptures/furniture, entitled “some observations about your chair”, which begins: “She is built to withstand the inevitable urge to sit on her …” , so, yeah, sculpture, form, shock art, sure.

Shock hit the artist as hard as art. He appears to have become persona non grata in the post-pop, and avant-garde world of the 1970s, the coup de grace being the use of a modified version of the sculptures in the “milk bar” scene of A Clockwork Orange, a film anticipating the end of the ’60s/’70s arc of optimism and growth, and an approaching dystopia. The film itself was later withdrawn from showing, after Kubrick became convinced it had sparked a wave of copy-cat crimes.

The reception of Jones’ near-unique dissent from the dominant direction of avant-garde art was indicative of something important: the direction of modernity and innovation remained that of an idea of human liberation, one moreover with a specific content. Sexual liberation was not merely a free-for-all, but the idea of a heterosexuality of perfect equality, accessing a natural life force.

Around the same time as Jones’ sculptures became first public, and then private, circulating to private collectors, The Joy of Sex was published, with its now comical pictures of a bearded groover and his brunette partner of average dimensions. Today they look like sociology lecturer and student with self-esteem issues, wholly encultured, but the aim of the author — Alex Comfort, a revolutionary anarchist/pacifist who had jousted with Orwell — was to present them as some achieved state of perfect de-repression.

The idea of sexuality as arising from play, rules and patterns, producing desire, was a few years away, at least in the English-speaking world. There was no way to see the sculptures other than as domination that happened to be sexual, since the issue of liberation, rather than identity, remained the uppermost concern. By the time that new wave crashed, Jones’ work had been somewhat forgotten, not least since he had failed to come up with anything to top it. By the 1980s, he was doing an extended series of highly decorative paintings using the utmost skill of colour-shading and layering with a banal series of circus and magician tableaux, the partial figures disappearing back into fields of colour, most of them still the pneumatic women of his sculptures. All of them appear to have come from private collections.

They have the uniquely dissatisfying, refusing feel of the “bad art” movement of the ’80s, a la Julian Schnabel et al, but without even the slight layer of ironic distance the “bad artists” put into their work.  The work was also somewhat forgotten, as the mythology of modernism, of ceaseless advance, fell into disarray. By the early ’90s, the public S & M scene, hitherto confined to gay culture, had stake a claim in straight culture, with “hellfire” clubs (which were picketed). By the late ’90s, office parties were being booked there. By the mid-2000s, S & M had been routinised into the Cosmopolitan repertoire of everyday sexuality, and in a few months the Fifty Shades of Grey film will hit the screens, after 50 million copies of the books have been sold, largely to women.

The idea that domination play and sadism/masochism focused on the female body could have a content apart from the codes used to deploy it is now what seems archaic, for better or worse. Jones’ fibreglass models are ancient relics of vanished outrages. His decades of exploration of colour, shade and the play of form have been entirely consumed in three figures he put once in one gallery in 1969. The women eventually came out on top.