iSentia Index: Knighthood for Queen’s Consort drowns out everything else

It's been a busy week for Tony Abbott and Campbell Newman, with both leaders forced to defend their decisions.

A big increase in the volume of coverage across the board as the political media cranked out of its summer slumber. Prime Minister Tony Abbott almost doubled his coverage, mostly in the last couple of days and mostly surrounding the decision to make Prince Philip a Knight of the Order of Australia, with pretty much the entire press gallery adding their voices to the few before Christmas who were claiming Tony Abbott’s leadership may be at risk. The more things change …

Employment Minister Eric Abetz was the main mover up the list, partly because of coverage about further cuts to the public service and not ruling out further IR changes, but mainly owing to his public defence of the PM’s leadership, while Communications Minister Malcolm Turnbull returned to the top 20, again mainly mentioned as a possible alternative leader along with Foreign Minister Julie Bishop.

Queensland Premier Campbell Newman goes into the last few days of the election campaign still getting plenty more coverage than Labor leader Annastacia Palaszczuk, but it’s been a very mixed bag, with media criticism of his campaign tactics, comments regarding bikie allegations and infrastructure spending, and the stoush with Alan Jones now heading to the courts. 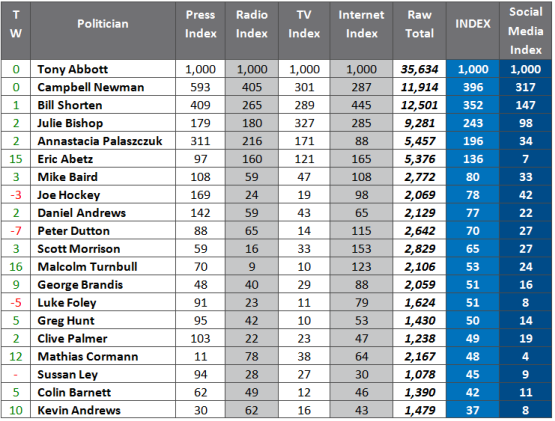 The Prince Philip decision lit up talkback like we haven’t seen since Julia Gillard was prime minister, although Tony Abbott had quite a few defenders, if far from a majority.

January isn’t even over and Tony Abbott has almost cracked the 100,000 on social media already. Campbell Newman also hit a premier record with over 40,000 comments in a tough week for both men.

As has been noted by Crikey and other media, making Rosie Batty Australian of the Year was an incredibly important statement about a huge problem in our society, sadly overshadowed by less important decisions made on Australia Day.