American Sniper won't turn you into a gun-toting Republican. But it will provoke some interesting discussion. 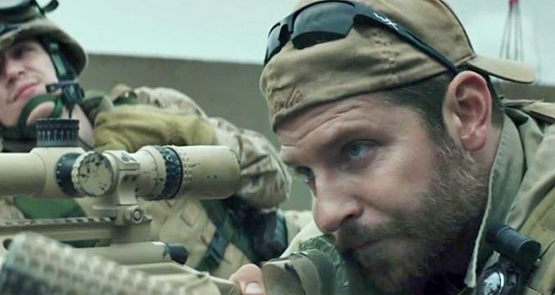 By now you’ve probably heard some hullabaloo about Clint Eastwood’s new movie, American Sniper. The grizzled veteran who rose to fame blowing apart greedy varmints in spaghetti westerns and famously patrolled the streets as a bad cop armed with rhetorical questions (“well, do ya, punk?”) has never shied away as an actor or a filmmaker from tough characters with, shall we say, firm beliefs. In fact, he’s made a career out of them.

The 84-year-old actor/writer/director was obviously too old to play the lead in American Sniper (which opened in Australian cinemas last week), though it’s the kind of role that would have suited his younger self to a tee. Instead, Bradley Cooper is Chris Kyle, a real-life Navy SEAL sharpshooter who chalked up a whopping body count in Iraq (something like 160 kills) and was naturally regarded as a war hero — at least by anybody who supported the war.

If you remember watching Eastwood’s bizarre performance at the 2012 GOP convention, in which he argued with an empty wooden chair supposedly holding an invisible Barack Obama, you’d be forgiven for thinking of him as an over-the-hill fuddy duddy who forgot to take his meds.

But according to New York magazine critic David Edelstein, American Sniper proves Eastwood is shrewder than ever. Edelstein argues the film is a platform Republican movie — a spectacular and deceptive how-to-vote card. Seth Rogen compared it to Nazi propaganda. Bill Maher called it insultingly patriotic. Australia’s own Marc Fennell, reviewer for Triple J, described it as “the most insidious propaganda film I’ve seen in a long time”.

The majority of critics and cinemagoers acknowledge the director’s most controversial work to date is well made and well acted. Eastwood’s style suits the material, which has drawn comparisons to Kathryn Bigelow’s also controversial 2008 oxygen-depriver The Hurt Locker.

He seems to instinctively know when to slow the action and when to compensate by quickening the drama (and vice versa), and it’s hard to deny the film’s technical achievements. It is certified fresh on Rotten Tomatoes and received six Academy Award nominations, including a nod in the Best Picture category.

Audiences seem to like it. They’re certainly flocking in droves: American Sniper has astounded box office pundits by smashing the record for the largest American opening of all time for the month of January. It has already hauled a quarter of a billion dollars internationally.

But boy, lots of people have their knickers in knots. The depiction of the protagonist — who is asked to “put the fear of God in those fuckers” and is all too happy to oblige — has sparked a national conversation about whether Kyle is a figure deserving of respect or condemnation, and whether Americans harbor a prejudice against Middle Eastern races. Perhaps that’s a conversation they needed to have.

Critics of American Sniper’s allegedly pernicious affect on viewers have cited a number of hate-filled tweets posted by yee-haw audiences who saw it, loved it and took to their smartphones afterwards to write racially stereotyping bile. The implication being that perfectly level-headed people sauntered into the cinema to see that new action movie and emerged as bigoted flag-waving freaks.

It doesn’t work like that, and the debate around American Sniper says less about Eastwood’s supposed ethical bastardry than it does the extent to which the political Left has entrenched itself in Hollywood. And how intolerant sections of the industry and the media are when it comes to contemplating perspectives that are not their own.

How many war films have you seen in which kind-hearted protagonists or wide-eyed supporting characters have dramatically died and the picture ends with an unmistakable message — delivered with all the subtlety of a sock full of pennies flung at the noggin — that war is wrong, intolerable and unacceptable?

Such messages may resonate with the political instincts of me, you, or the person down the street. But does that make them any more valid — or any less “insidious” — than a film that presents war not only from the perspective of those who fight in it, but the point of view of an artist who believes what he is doing is morally justified?

If one agrees such perspectives have a place in public discourse, we also need to be prepared to be challenged, to be exposed to things outside our ideological comfort zones.

But why should he have to? If historical accuracy is the subject in question — on this matter the film has come under scrutiny, though mostly in terms of perspective and omissions rather than factual errors — what about a preposterously inaccurate film like Argo? Was Ben Affleck’s Oscar winner insidious propaganda too?

The inference is that the Left apparently have a right to make powerful polemic war films but the Right, apparently, do not. Do we really want Hollywood to be an echo chamber that bounces around variations of the same opinions?

It’s almost as if (shock! horror!) there is value in cinema that encourages the public and the media to put important intellectual debates on the agenda. You won’t hear it from the naysayers, but American Sniper does that. Even though it has its moments — depicting so many US flags just before the closing credits ends it on wrong note, in my opinion — it does so without pandering to the audience or telling them how they should or shouldn’t react.

Rundle: <em>American Sniper</em> is the self-hating nihilism of a nation in decay

Can virtual reality save the movie industry?