Essential: voters continue to mark the government down

The government continues to fall in voters' estimation on important policy issues, but a large number of voters still think it's too soft on asylum seekers, Essential Report shows.

Repeating a feature of the Rudd government from 2009-10, the Abbott government’s standing with voters in relation to major issues has deteriorated markedly, and that deterioration has continued in recent months. “Relations with foreign countries” is now the only issue on which the government has a net positive rating from voters, with 33% saying its handling has been good and 28% saying its handling has been poor. A year ago, the government had a positive net approval on two issues — handling of asylum seekers and managing the economy — and its net approval on relations with foreign countries was just -3 (i.e. voter perceptions of the government’s handling of foreign relations relations has improved in the last 12 months). But by September, the government had deteriorated on every issue except foreign relations; across 11 major issues, its net approval rating had gone from a total of -98 to -171. Since September, that outcome has worsened to -195. 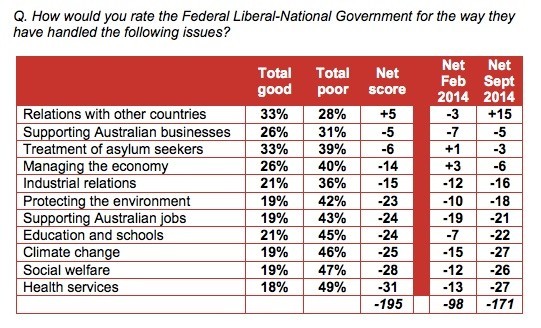 Particularly concerning for the government is its deterioration on the most influential issues for voters — managing the economy, health, education and jobs. It has gone from a positive score on the economy last February to -14; it has gone from -13 on health (health is traditionally a Labor issue) to -31, reflecting the disaster of its attacks on Medicare; it has gone from -7 on education to -24, showing what a debacle its higher education reform proposals have been. The only silver lining is on “supporting Australian jobs”, where voters had a very poor opinion of the government a year ago and it has only marginally worsened since then.

Essential also asked voters about their renewable energy usage. Some 27% of voters say their household has solar roof panels; 17% say they have solar hot water (the level averages out at around the 22% level of penetration identified in a study last year). Voting intention appears to have no impact on the issue, with Labor, Greens and Liberal voters all indistinguishable on solar panels, only separated by four points on solar hot water and Greens voters only a little more likely to use a “green energy” option from power companies. Queenslanders and older voters are more likely to have rooftop solar than the rest of us. Some 14% and 10% of voters respectively say they are considering solar panels or solar hot water.

I do have some sympathy for Toady – if you were desperate for acceptance in the Right circles, had copped one or two many punches around the ring in your hay-day, and were waking up every day, now, protected by the velvet glove of Rupert’s monolithic PR machine (the rest of the conservative dominated media taking their leads from them), his papers (the ones you like to read most) telling you what a good boy you are and that you can do little wrong, while telling the country that any opposition are butt-holes; while they ignored reminding you (and the rest of the country) about how many times you’d promised to consult more, after not doing it again and again (as if you had some sort of “revolving door confessional” or else those “reporters” had been punched-out too?) – I reckon you’d think it was your Team and you could do anything you liked too?
Because absolution (or “Abbott-solution”?) was just an edition away?