Stronger together? Why an Arrium-BlueScope merger might make sense

There is not as much money in steel as there used to be, but maybe two of Australia's manufacturers would be better off together, write Crikey business commentators Paddy Manning and Glenn Dyer.

Business commentators were pretty harsh over the weekend about Friday’s “redesign” announcement by steelmaker Arrium (formerly OneSteel), which will cause $1.3 billion to be written off and 580 jobs lost at its Southern Iron mine in South Australia, to be mothballed in the face of low iron ore prices.

The Australian’s John Durie, for example, gave Arrium both barrels for its “past lunacy” and said the board had proved “nothing short of a disgrace for taking shareholders down the path to near doom”.

The Australian Financial Review’s Matthew Stevens wrote of the “vulnerability Arrium embraced in chasing the steel raw materials boom by transforming its iron ore business from an internal supplier to an export earner” and warned there was “further structural work” to be done by the “worryingly marginal” company, flagging a partial sell-down of the still-profitable mining consumables business that sells steel balls, ropes and wheels to the resources industry.

Rewind a few years and many commentators, including Crikey, were saying almost exactly the opposite: Arrium was lauded for its 2004 push to integrate an iron ore mine and take advantage of the boom in iron ore prices, while BlueScope was panned for failing to innovate and diversify.

Has the criticism been fair, both then and now, or are we all guilty of writing with the benefit of 20:20 hindsight?

The plain truth is that a halving of the iron ore price, and related plunge in the value of the Australian dollar, have turned the tables on both companies and BlueScope now appears better placed as it is not shackled with an uncompetitive mining business.

But like Arrium, it is shackled to a low-margin steel-making business, which has been barely profitable for years. The recent 20% slide in the value of the Australian dollar should help both companies, but the currencies of two of their major competitors, South Korea and Japan, have also weakened.

Both companies went into the financial crisis saddled with too much debt, and both companies have delivered disastrous returns over the long term, as is shown by the following chart of the relative share price performance of Arrium and BlueScope over the last 10 years, from a common base point: 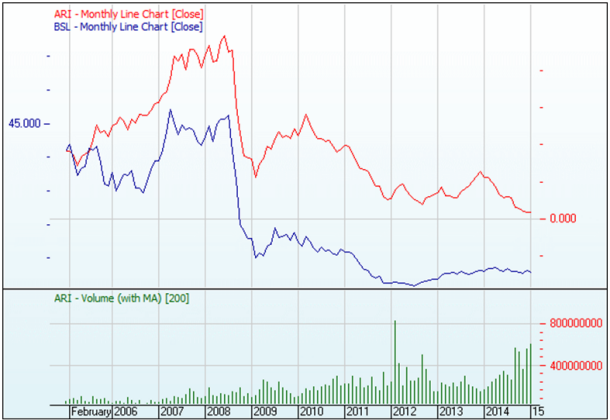 Given the weekend commentary it is interesting that Arrium still beats BlueScope over the long term, but perhaps the focus of our comment should be less on who is winning a two-horse race — given particular commodity and currency market settings — and more on what is the most efficient and competitive structure for Australia’s steel-making industry.

On the one hand, things are looking grim with the imminent demise of auto manufacturing in this country and the government’s apparent preference for Australia’s next submarine to be built overseas (albeit potentially with local steel if a Japanese vessel is chosen and the latest unconfirmed reports are to be believed). On the other hand, raw material input costs have just fallen dramatically, and with the dollar in retreat, and Arrium and BlueScope’s balance sheets in reasonable shape, the future for the steel-making industry is brighter than it was five years ago.

Given the carving up of Smorgon Steel in 2007, it might well be that the future is for more consolidation in the steel industry, as when BlueScope bought Arrium’s sheet and coil distribution assets for $23 million last March. Both Arrium and BlueScope were spun out of the old BHP at the beginning of last decade, and there was speculation last year that BlueScope wanted to “slowly piece back together the old BHP steel empire”.

Back in 2012, when Arrium was the subject of a takeover play by a consortium of Korean steel-making giant POSCO and Hong Kong commodities trader Noble Group, Deutsche Bank steel analyst Emily Smith (then Behncke) wrote up the synergies between the two Australian steel-makers and warned it “could be the last chance for a potential Arrium-BlueScope merger”.

A merger would throw up obvious competition and political concerns — the NSW and SA governments would not want to see job losses at Port Kembla or Whyalla — but with iron ore prices unlikely to recover for a decade, the arguments for further consolidation are getting stronger.

How OneSteel stole the march on BlueScope

Beware the insights of rent-seekers

Between the devil and the deep red Xi: Turnbull flies to China to save Aussie trade