Lots of Libs joining the Prince in Australia Day honours 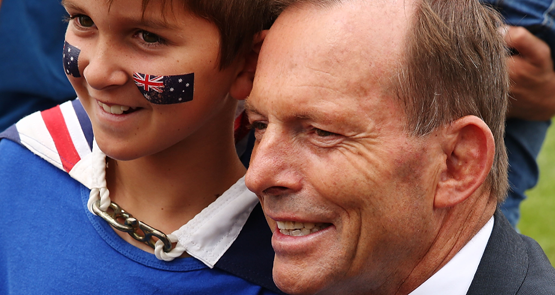 In one fell swoop, Prime Minister Tony Abbott has done his best to discredit the entire notion of rewarding Australians for devoting themselves to improving the country, the plight of others, or furthering their careers offshore helping others. The idea of selfless community service has been undermined (I hope not fatally) not only by the absurd appointment of Prince Philip as a Knight of Australia — an appointment approved by Tony Abbott’s only other new knight, Angus Houston — but also by some particularly offensive gongs handed out in the regular Australia Day honours list.

This year’s Australia Day honours list contained quite a few people who work in media, such as George Negus, film reviewer David Stratton (an AM), Jonathan Coleman (an OAM), a Sydney-based comedian and one of the early presenters on the ABC’s youth-focused radio station, Double J/Triple J. Was this the 40th birthday gong for Double J/Triple J, which hit the magic age on January 19? Sports stars receiving gongs included former Australian Olympian Rachael Sporn and former world surfing champ Layne Beachley — both well deserved, especially when compared to Prince Phil’s gong.

Property featured heavily in the business gongs, which is ironic given that the Liberal Party in NSW has been badly damaged by illegal campaign donations from the sector, especially in the NSW central coast and Newcastle area. But property is also appropriate given the way the property sector is keeping the Australian economy afloat as it transitions from the resource investment boom. To that end, Brian White (an AO) of the Ray White property group in Sydney got a gong, and Greg Paramor, another veteran of the Sydney property industry (Hooker and Mirvac, now Folkestone), was also made an AO.

In Sydney, Macquarie Bank’s former property guru and now charity worker Bill Moss was also given a well deserved AO. And in Perth, Macquarie Group’s Mark Barnaba (an AM) was rewarded for, among others “significant service to the investment banking and financial sectors”. He’s also a director of iron ore exporter Fortescue Metals Group, which will be back in the headlines Thursday when it produces its December-quarter production and sales report amid speculation it might  have to write down its assets by a lot. Veteran Sydney property billionaire (especially in shopping centres) Lang Walker also received an OA.

The biggest eyebrow-raiser among the business gongs was the AM given to Mark Bouris, the Sydney property person (Wizard and now Yellow Brick Road, a mortgage and funds management and advice company). His cheer squad quite often paints Bouris as the “new” John Symonds (Aussie Home Loans), but he’s nothing of the sort.

The awards were bipartisan in their approval of the careers of two of our most recent, very obvious political hacks — Liberal Party President Richard Alston, who only last week was exposed for renting Stokes House in London, the official residence of the Australian High Commissioner to the UK, for a function last year, along with his employer, Sir Michael Hintze’s hedge fund. The second objectionable gong was for Stephen Loosley, former NSW ALP secretary and former senator from NSW. In addition, Loosley is a News Corp columnist, Sky News talking head and corporate lobbyist (he lobbied for James Hardie 12 years ago as it sought to avoid or minimise some of its asbestos liabilities in Australia).

Former NSW Labor minister Craig Knowles also received an AM, as did Gerard Henderson’s wife, Anne Henderson, “For significant service to literature in the field of political history and to the community by fostering public debate and discussion” — and making their Sydney Institute run on time, all without disclosing their benefactors. And former Labor senator Rosemary Crowley (South Australia) was also given a gong (an AO). One gong unmentioned was made to former NSW Supreme Court judge Andrew Rogers, who is married to former Liberal Party senator and Howard-government minister Helen Coonan. Rogers got an AO, as did another resident of Wentworth (Malcolm Turnbull’s eastern suburbs seat in Sydney): Sean Howard, a partner years ago in OzEmail, which helped make Turnbull a very wealthy man.

And AOs were handed out to Peter and Joan Clemenger for “distinguished service to the visual and performing arts as a benefactor, patron and supporter”. No mention of Clemenger being the Liberal Party’s ad house in NSW back in the early 1990s.

Prince …like Purple Rain Prince … Yeah got it. Good one Tony… Totally awesome……

Such a ridiculous act from our own forelock tugging simpleton, masquerading as our leader. A further act of a## licking of the really wealthy by a wannabe, desperate for the crumbs from their plate. I did get some amusement however, out of the also ridiculous Prof David Flint backing the decision. And reading the comments to Dennis Shannahan in the Oz also provided vast amusement. Where to next…I think I might check out Catallaxy to see what those erstwhile folk are saying..

He wanted to do a Sir Rupert as well for services rendered to the LNP, but the Queen said she would not accommodate the American low life under any circumstances. That good LNP captains call was then dropped. Apparently Rupert was gutted.

When told there was a quite a kerfuffle over the awarding of his knighthood by Tony Abbott, HRH was overheard to say “What’s all the fuss? We made him an abbot didn’t we?”