Campbell Newman's nerves appear to be frayed, with some questionable campaigning by the Queensland Premier. 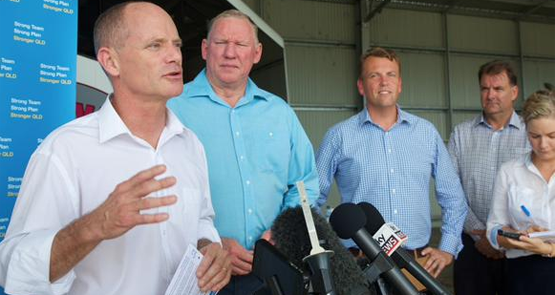 The intensity of any election campaign puts a blowtorch to party leaders, magnifying their strengths, failings and weaknesses. Queensland Premier Campbell Newman has been no exception.

For three years he has been protected by an army of civil servants from the Premier’s Department and the slavish scribblers of the Murdoch-owned Courier-Mail, who have acted as his propaganda unit.

Together they have provided the public with the image of a dynamic, “can-do”, tough leader whose mission is to create a golden era of economic prosperity.

But as Newman’s short, sharp election campaign has unfolded, gaping holes have begun to appear in the PR narrative.

Example 1: In Cairns last week, Newman’s short-fused petulance revealed itself when he said electorates that did not return LNP candidates would not receive the infrastructure projects he had promised.

“If you vote one for the LNP candidate in your local area and they get up they will deliver,” he said, adding: “If they’re not elected, well, the new member may have different ideas and different priorities that we cannot guarantee we will do.”

To north Queenslanders, Newman’s message could not have been clearer: vote LNP or get stuffed. It has persuaded many voters in Cairns, Townsville, Mackay and Rockhampton to take the get stuffed option.

Example 2: During the final days of the campaign, Newman has broken from his own LNP pack and gone sordidly negative in attacking the ALP and its leader Annastacia Palaszczuk. At the live People’s Forum at the Broncos Leagues Club last Friday night he suddenly suggested “dirty” money from criminal bikie gangs could be financing Labor’s election campaign.

“We know that the CFMEU have some very strong links to criminal gangs,” he continued. “I’m just asking you [Palaszczuk], how can you can assure Queenslanders that the money that’s been coming in is clean, it’s not tainted?”

A clearly unsettled Palaszczuk replied: “I doubt that, that is just ridiculous.”

When he grabbed at the bikie-ALP headlines on the Sky News-hosted debate, Newman already knew that LNP’s advertisements would be rolled out on the party’s Facebook and YouTube accounts 48 hours later.

But instead of the Construction, Forestry, Mining and Energy Union, the accusation was directed at the Electrical Trade Union (ETU), whose official Peter Simpson was filmed on a demonstration against Newman’s Vicious Lawless Association Disestablishment (VLAD) laws, saying: “I know some guys in motorcycle clubs, some of our guys have got good relationships with guys in motorcycle clubs.”

He added: “Some people are a bit nervous about being associated with bikies, I’m proud to say the Electrical Trade Union aren’t. The MUA [1998 waterfront] dispute, I remember it well, the bikies rode up to the MUA dispute bringing wads of cash to support the guys on the picket line. I was there with them.”

While Newman’s bluster was aimed at “criminal gangs” (i.e. outlaw bikie gangs such as The Finks, Bandidos, Rebels, Nomads, Comancheros etc) Simpson was referring to “motorcycle clubs”, which are different entities altogether.

The LNP video carries the superimposed caption that the ETU gave $206,374.50 to Queensland Labor when in fact the $200,000 donation was a national contribution, not a state one.

So what is he basing his claims on? Newman explained: “As I go around the state, people say to me, ‘Campbell, we know that the unions and criminal gangs have a close association’. They’ve seen that and they know that and they also know that bikies are backing the Labor Party and they’re saying to me, ‘Be strong’.”

His squalid and misinformed attack on Labor has exposed Newman, a former army major, as a relentlessly ambitious bully.

Example 3: Newman personally authorised an LNP email showing a black-and-white photo of Palaszczuk with the caption: “Don’t wake up with regrets.”

“It’s important that people don’t wake up with regrets because if they vote for Labor or the independents or the minor parties, they’ll end up with a hung parliament, they’ll see chaos, job destruction.”

One day later, Newman was on the front page of Murdoch’s Sunday Mail cuddling his wife Lisa under a banner headline, “She’s my rock”, followed by a snivelling farrago of PR: “Premier Campbell Newman has spoken of his strong marriage and how he leans on his wife Lisa during the tough times.”

The LNP bedtime email was so offensive it should have been withdrawn immediately. It wasn’t, and it gave voters an insight into his warped attitude to women and electioneering.

In the Seinfeld episode “The Big Salad”, the character known only as Newman comes under discussion:

Elaine: “Perhaps there’s more to Newman than meets the eye.”

Elaine: “Maybe he’s an enigma. A mystery wrapped in a riddle.”

Jerry: “Yeah. He’s a mystery wrapped in a Twinkie.”

Even if LNP holds on, Newman looks like a goner

Alex, forgive me for mentioning that as voters appeared not to have been won over by the Opposition’s ‘arguments’, the biggest “cracks” would seem to have been those occurring in the electoral confidence of many posters on this site.

Yes Norman, insults will bring everyone around to your way of thinking (if you bother to).

“So what is he basing his claims on? Newman explained: “As I go around the state, people say to me, ‘Campbell, we know that the unions and criminal gangs have a close association’. They’ve seen that and they know that and they also know that bikies are backing the Labor Party and they’re saying to me, ‘Be strong’.”

Yes, and who would these people be? Very probably the rusted on LNP supporters who are allowed to get near him at his heavily controlled photo ops. And where would they be getting that impression? Well, possibly from the screaming Courier-Mail headline, “Bikies Will Back Labor At Next State Election”, which appeared the day before Newman called the election, and which suggests a certain amount of collaboration between the LNP and News Ltd. And possibly they’re getting that impression, from the LNP ads that feature that headline, as an example of “what we’ve learned during the election campaign”.
I suspect that many Queenslanders have been learning a few other things during the campaign.

Newman should romp it in given the opposition leader (and media) cannot eben pronounce her name. Of course union lemmings will not recognise this 🙂

“His squalid and misinformed attack on Labor has exposed Newman, a former army major, as a relentlessly ambitious bully.” Actually, that is too polite. One of the most frightening things about Newman however was revealed a year or so back. He was asked about some proposed legislation. The reporter said, doesn’t that offend the principle of the separation of powers? Newman’s response: “Isn’t that some American thing.?” There have many such frightening examples from Newman. It would take more than a comment to list them all. With a modicum of luck there is less than a week left of the little horror.