Julie Bishop is openly positioning herself as Tony Abbott's replacement as the Prime Minister's judgement again fails him. 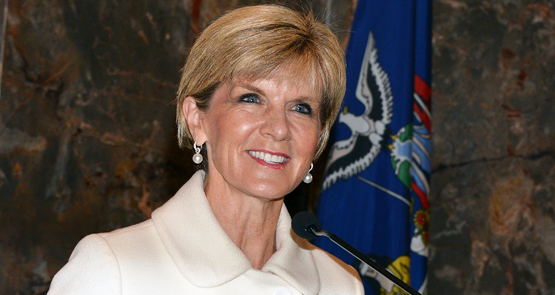 While Tony Abbott was preparing to bestow a knighthood reserved for “pre-eminent Australians” to a wealthy Greek bigot living in the UK, another type of anointing was taking place in New York. As revealed in the Financial Review, on the weekend Rupert “all Muslims not guilty” Murdoch received Julie Bishop, Foreign Minister of his far-flung vassal state, Australia, and senior member of the client government he helped install there.

The timing of the meeting, and its revelation by Fairfax, is exquisite — and entirely unsubtle: just when Abbott demonstrated his leadership is permanently hostage to a political mindset that deeply confuses even his strongest supporters, there’s Bishop getting the News Corp imprimatur on the same day as Fairfax slavishly devoted an article to her thoughts on why Australia should retain a military presence in Afghanistan (“nice place to send refugees, wouldn’t want to live there”) beyond the current withdrawal date. Bishop the statesperson, Bishop the anointed one, Bishop the heir apparent. At least, that’s how she’d like the rest of us, and particularly her parliamentary colleagues, to see her at the moment her leader’s failings are on such public display.

For the moment, her colleagues would settle for a leader who resides on Earth, rather than one who frequently visits our little world but whose permanent home is on some other political planet, possibly in some completely separate universe, a world in which Downton Abbey and Brideshead Revisited aren’t works of fiction, but political textbooks. Abbott is dancing to his own tune, one no one else can hear, one no one except the cringing Wormtongues of the monarchist movement even want to hear, a medley equal parts BBC costume drama theme tune and Last Night of the Proms clap-along.

The result is, before the end of January of what was supposed to be a new year relaunch of a government scraped down and set for smoother sailing, Abbott’s judgement has twice been demonstrated to be profoundly flawed. The debacle over cuts to Medicare schedule payments — another captain’s pick, made over the objections of Joe Hockey — that blew up before the holidays had even finished, then Sir Duke Phil the Greek, ostentatiously a captain’s pick, made with no consultation other than the other recipient, Angus Houston, who would apparently prefer people not use his honorific anyway. Phil didn’t even call Abbott to thank him. Then again, one assumes he didn’t call the PNG government when it made him Royal Chief of the Order of Logohu, either.

It illustrates the recurring problem with Abbott’s “captain’s picks” is that they’re all duds. His first big one was the Rolls-Royce paid parental leave scheme, made with no consultation with his colleagues or business in 2010, to which he clung grimly for four years until budget realities and the open antipathy of his colleagues forced him to start hacking at it; it remains in policy purgatory even now, midway through the government’s term. Then there was Bronwyn Bishop, his pick for Speaker while compiling a ministry almost entirely devoid of women, who has proven one of the most embarrassingly partisan figures to hold that position since the worst days of Keating. It was Bishop who humiliated the government with her bizarre, radio prank-inspired war on Islamic clothing and her reluctant, belated acceptance of Abbott’s order to abandon it.

It’s almost as if Abbott, brilliant at making a case to oppose something, completely lacks the skills to make the case for anything, no matter what. Then again, this is the politician whose remarkable ascension to the prime ministership has been crafted on simply making assertions, unsupported by evidence, a man unbound by quaint notions of truth and logic. It turns out, surprisingly, that this isn’t enough to lead a country, not if you want to get anything done, rather than simply pride yourself on reversing your opponent’s achievements. Abbott doesn’t, as the Americans say, fill the chair, and he shows no signs of expanding into it.

To make matters worse, the LNP is, remarkably, facing a difficult battle to retain government in Queensland. In the unlikely event the LNP actually finds a way to lose on Saturday, the responsibility will lie almost entirely in Brisbane, given the way the Newman government has tried ever harder to mimic the Bjelke-Petersen years of civil liberties abuses, corruption, avoidance of scrutiny and, as of last week, threatening to punish electorates that vote Labor. But a loss will have big implications in Canberra and will further undermine Abbott, whose is so damaged politically he has been banned from the state for the duration of the campaign.

In which case, events might move more quickly than even Julie Bishop evidently hopes.

Mind you memories are short – glossed up Julia Bishop now but miserable failure as deputy.
Ah the show must go on- and we the people are irrelevant.

Would you blame Charlie McCarthy for his actions?
[Let’s outlaw boxing while there’s still hope for future generations.]

“Abbott doesn’t, as the Americans say, fill the chair” no, but he seems more than capable at filling the toilet.

Copy from my comment on Myriam Robin’s article: Print graffiti? No good news for Abbott in knight-mare coverage:

I’m starting to suspect that such gaffes are deliberate.
Along with criticisms in the Murdoch press it is looking like Abbott may be conspiring in his own downfall (and to be well looked after later).

How to engineer a necessary leadership change without looking like a Rudd/Gillard shemozzle.

All this “filling” talk has reminded me….

I’m completely out of popcorn and it’s all Tony’s fault!

Must get more….the show ain’t over yet!