Just who is the nation's best media writer? ... 3AW caller has a Liberal history ... is someone coming for Jason "orgasms" Wood? ...

Playing favourites.  It’s frowned upon for parents to admit to having a favourite child, but perhaps editors can get away with it. Is Chris Mitchell at The Australian sending media editor Sharri Markson a message with this byline for her offsider Darren Davidson in today’s paper? It’s a big claim, especially when it’s plugging an uncritical piece with little new information on Channel Ten’s latest attempt to regain audience share with I’m a Celebrity, Get Me Out of Here. In the last few months Ms Tips kept hearing that Markson was going to be moved on from media, but Mitchell told us: “She is the best editor the section has ever had”. We imagine it will be an interesting weekend at the media desk. 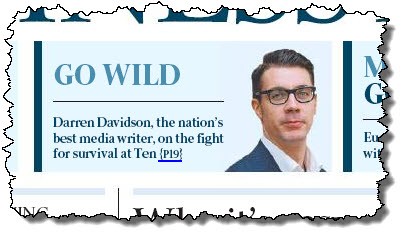 Challenging Abbott part of the plan? It was talkback radio gold yesterday morning when “Andrew”, a card-carrying Liberal, had it out with Prime Minister Tony Abbott, telling him he was “the world’s worst salesman” on Neil Mitchell’s program on 3AW. The producers got him back today, where he revealed his full name was Andrew McNabb and that he “did not know it would cause such a stir”. Our tipster is less surprised, however:

“You may want to dig further in regard to yesterday’s 3AW caller ‘Andrew’, who slapped the PM. Although the PM thought him to be a Labor plant, he was identified on 3AW today as Andrew McNabb and yes, a proud card-carrying Liberal. McNabb attempted preselection for La Trobe but was ultimately beaten by former MP Jason ‘modified orgasms‘ Wood. Wood is a favourite with the blue-rinse old ladies in the party, but has proved time and time again to be a dud. One local Lib described him as not much better than a part-time councillor. With La Trobe likely to fall to Labor in the next election, McNabb’s attack yesterday was more about showing he has ‘balls’ and proving to the party they made a huge mistake in support of Wood. Although the Libs don’t normally turn on sitting members, this could be different. If Abbott and Hockey go in favour of Bishop and Turnbull (as per McNabb’s on-air predication) the party may take the opportunity to jettison dead ‘Wood’, so to speak.”

Andrew McNabb is a name to watch, then.

He’s a natural. After we included a prime example of Education Minister Christopher Pyne’s awkward banter yesterday, we got this from Crikey contributor Stilgherrian:

“‘Education Minister Christopher Pyne started his interview on Adelaide breakfast radio yesterday by saying that he had got a slimming new wetsuit for Christmas,’ you wrote? I guess this explains why the so-called ‘Sydney Harbour seal’, as seen on the steps of the Sydney Opera House from time to time, only appeared after Christmas and disappeared before the politicians returned to work. As I speculated on Twitter on 13 January, it’s not really a seal at all, just Pyne in a suit.”

What an idea. And speaking of Pyne, we received this from a tipster, reminding us that Pyne has long been adept at making his audience squirm:

“A bit old, but heard first hand and love repeating it. On Tony Abbott and Christopher Pyne’s visit to Arnhemland, Pyne visited the local primary school in Nhulunbuy and shown a specialist ESL classroom — mostly Yolngu students. The conversation went (to be said in Pyne’s voice) ‘My, those pencils are sharp. You didn’t sharpen them because you knew I was coming, did you?’ The look on the teacher’s face was priceless — and the answer — NO.”

Here comes the boom. While applying for government tenders is usually pretty dry work (and dry reading), this one released yesterday is for something more exciting than usual — to demolish the tallest structure in the southern hemisphere. The Omega Tower in far east Gippsland is a decommissioned defence navigation facility and has in recent years attracted BASE jumpers, leading to the death of one. The tender says quite simply “Execution of the Demolition Works according to the Work Plan,” but Ms Tips is already imagining a Looney Tunes style boom.

Going once … After the eBay overlords decided that the nanny state was more important than doing the right thing for charity, our silent auction of the bottle of red wine wagered by Charles Richardson and Glenn Druery has proceeded by leaps and bounds. The current highest bid is $350, and with five days to go until bidding closes we’re sure we can do better than that. The auction will close at 11am on Wednesday, so email your best offer here with the subject line “red wine auction bid $ – “. The kids at Camp Quality will appreciate it, and you’ll get your hands on a nice bottle of red signed by the five Victorian minor party MLCs, which is called “The Rest” — we’re sure Richardson didn’t mean anything untoward when he picked it out.

Was. Is. Always — not quite. We received this tip yesterday that retail giant David Jones was shafting local designers in favour of its own brands, only to read a very similar thing in the Australian Financial Review this morning.

“Young Australian designers and international brands are starting to disappear from David Jones to make way for South African brands sold by parent company Woolworths in that country. It’s the start of a major move down market by DJs, and one that is causing rumblings inside the business and through the fashion industry. At least one in five ‘famous’ brands will go to make way for Woolworths home brands. Not good.”

Our sister website Smart Company contacted David Jones this morning to find out if the brand had considered how this would alienate parts of its loyal customer base and didn’t hear back by our deadline.

Polling — the big issues. After a tipster told us yesterday he was getting some strange questions in their ReachTEL polls, another reader from north of Brisbane told us a poll was asking about the air-con as well as out tipster’s voting intentions:

“‘Are you concerned that your use of air-conditioning in recent days has increased your electricity bill?’ I would suggest that everyone who owns an air-conditioner understands the nexus between air-conditioner use and the size of a power bill. I look forward to the startling conclusion our political elite draw from this survey.”

Maybe there’s a correlation between getting hot under the collar and how you vote.

When Turnbull’s leadership was on it’s last legs, Jason Wood was one of the most publicly outspoken of his remaining supporters. It would surprise me if he was collateral damage from a Turnbull restoration, as your tipster suggests.
(Not that I have any inside information here)